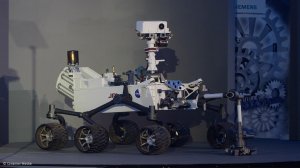 Siemens communications and government affairs manager Keshin Govender explains the significance of a working replica of the Curiosity Mars Rover that is currently on Mars (Camerawork and editing: Nicholas Boyd). Some footage provided by Nasa and its Jet Propulsion Laboratory.