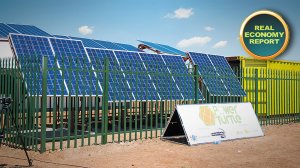 The South African government and several partners have launched the new-generation, modular solar solution the PowerTurtle at the off-grid Pheasant Folly Primary school in Palm Ridge, in Gauteng earlier this month.

Mia Breytenbach:
Crime and vandalism have played major roles in the disuse of solar PV power in South Africa. While previous pilots have been attempted, the solar panels were stolen, destroyed or vandalised.

In 2015 the Gauteng Department of Education (GDE) was approached with a new way of providing solar electricity to off-grid schools through the PowerTurtle.

The system incorporates security as a key design feature and is the first step towards secure, reliable and sustainable electricity for schools like Pheasant Folly Primary.

Mia Breytenbach:
Morning sunshine triggers the solar panels in the PowerTurtle to roll out on a specially engineered rail system and unfold in minutes. In the evening, the solar panels slide back into the reinforced six-metre shipping container for safe keeping.

AM Solar CEO Alastair Armstrong elaborates on the state-of the art technology used in the system.

Mia Breytenbach:
The PowerTurtle was sponsored by the Gauteng DoE, while funding for the pilot was provided by conference company EnergyNet.

Speaking at the event, senior adviser to the President on energy Silas Zimu highlighted the importance of electricity energy. He noted that energy leads the economy, the economy boosts education and education sustains the country.

Mia Breytenbach:
For students at Pheasant Folly, the free energy source is the reason for light in the classrooms, for music for creative arts and with light came joy.

Van der Walt however emphasised that the PowerTurtle forms the first phase of a larger vision, in which schools will become energy wells for local communities.

This will be through the installation of solar kiosks where batteries can be recharged, while providing the basis for a future information and communications, or Internet-based learning.