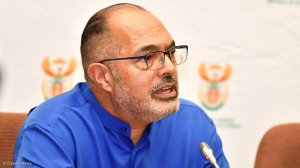 The South African Revenue Services (Sars) is on a modernisation drive that aims to strip out invoicing fraud and streamline services, Sars Commissioner Edward Kieswetter has told the annual World Congress of the International Federation of Freight Forwarders’ Associations (Fiata), in Cape Town.

He said Sars was expanding and improving its use of data. This would allow for better risk profiling through the use of artificial intelligence (AI).

“We aim to be more visible and impose harsher penalties on those who choose to defraud. We need to simplify our data requirements and improve our platform.”

Kieswetter told hundreds of delegates to the three-day conference in Cape Town that getting the correct valuations of cargo was a key challenge and that Sars was working hard, in collaboration with government and industry, to achieve this.

“Blatant invoicing fraud is a significant focus. It is inconceivable that a man’s woven suit from China costs R17.50 or a women’s knitted dress costs R2.46, or equally, women’s knitted pajamas from India costs R7.67. In response, we have no option but to be a lot more interventionist than we would like to be.”

“Any party which seeks to collude with customs officials will find themselves on the wrong side of the law. We will not tolerate collusion of any kind.”

He said mismatched consignments would be checked, with penalty provisions starting in December.

“Our aim must be to strengthen the entire ecosystem and movement of trade and goods. The time has come for a greater sense of stewardship. Let us never forget the human faces behind the work we do . . . the face of an African granny taking care of an extended family; a single mother unemployed taking care of her children. These are the beneficiaries of the work we do.”

He said Sars needed to make it "hard and costly" for those who chose not to comply, either through negligence or fraudulently.

Kieswetter said Sars and the freight forwarding industry had developed new technological functionalities from 2009 to 2014. These had been better for exporters, customers and brokers, but unfortunately, this had lapsed.

“We have sadly lost some momentum during the last five years. We need to reconceptualise the modernisation journey as the world has moved on.”

Looking at the bigger picture, Kieswetter said global trade volumes were expected to fall even further this year, on the back of rising trade tensions and economic uncertainty. Current tensions were hurting the smaller economies the most.

He said technology-driven disruptive innovation had introduced complexities to cross-border trade flows. But modernisation came with risks and could lead to illicit trade, smuggling, tariff miscalculations and fraudulent invoicing.

He said Sars was committed to driving principles of harmonisation across the value chain.

He said the government and Sars had to keep a fine balance between stringently enforcing compliance and facilitating trade on the other hand.

“The government has to provide adequate protection of our borders and protect citizens against high-risk and unsafe consumer products, food and medicines from unscrupulous players around the world.”

Kieswetter said Sars had piloted a new app for customs officers across all inspection types, which would allow for better tracking of its clients.

It also needed to upskill its staff, as they would need to be more engaged in strategic and analytic work in a future world of work that would involve AI, predictive analytics and machine learning.

The annual Fiata World Congress 2019, has brought together hundreds of industry leaders in the international freight logistics and transport industry. Fiata says it hopes industry leaders from across the globe will gain insights into industry challenges and present sustainable solutions.