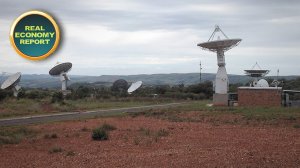 
Keith Campbell: In April, the South African National Space Agency, or Sansa, signed a Memorandum of Understanding with the NEPAD Planning and Coordination Agency. Raoul Hodges, Managing Director of Sansa’s Space Operations Directorate, explains the significance of this MoU.

Keith Campbell: For Sansa Space Operations, the past year has been an active one. Hodges tells us more.

Speaking in Johannesburg at the release of the ninth Industrial Policy Action Plan Trade and Industry Minister Dr Rob Davies reiterated the importance of sustaining a primary steel industry, which had come under intense pressure as a result of the current global oversupply of steel.