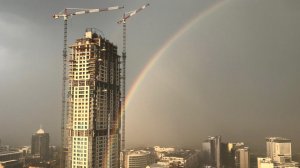 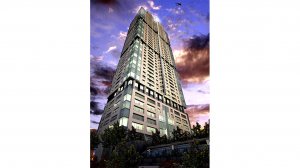 The Leonardo building, which is still under construction, pictured against the Sandton skyline

For example, he highlights that the current uncertain business environment in South Africa “will push architects to find new ways to harness the potential that is available in property development.”

Fitting into this vision of the future of architecture is the Sandton-based Leonardo high-rise building, which will eclipse the 50-storey Carlton Centre, in downtown Johannesburg, as South Africa’s tallest skyscraper, at 55 storeys, when it is completed.

According to McInerney, the Leonardo is a result of a realisation that, to resolve South Africa’s challenges, the country will need to look toward the rest of the world, while also dealing with the rapid urbanisation that is currently taking place in the country.

“As a mixed use development, [The Leonardo] solves issues relating to urban mobility and density, providing a destination for capital both local and foreign, the global identity that Africa is seeking,” he adds, noting that it has “become a beacon of hope” in showing the possibilities for development despite the country’s economic challenges.

The principal contract for the R3-billion Leonardo was signed on October 25, 2015, with physical construction having started in January 2016.

McInerney notes that the Leonardo also sets an example for how African cities could attract local and foreign direct investment in property.

Touching on the building itself, McInerney says the Leonardo was built with the two-pronged focus of a rapid build and ensuring it remained labour-intensive.

The building started off as a skeleton, comprising the main core, which rose four to five floors ahead of the concrete slabs at a pace of one cycle every eight days.

From here, the perimeter façade was built around the structure, which McInerney explains was constructed from the inside, together with the light weight block work, that creates the internal divisions.

All of this work was completed using cranes to load platforms, which hung off the edge of the building at four-storey intervals. These platforms were loaded with various components and materials needed to continue the work, including that of plastering, block work and internal finishes.

This approach led to the rising steadily, with only two cranes and no scaffolding, allowing workers to safely assemble the façade components on each floor and lift these outwards, bolting them into place from the inside.

However, what sets the building apart from its neighbours in bustling Sandton is that the Leonardo creates an understanding of what is behind the façade.  Its façade displays its various mixed uses as an extension of its interiors, which allows pedestrians to imagine what is happening inside the building.

McInerney notes that the public colonnade and many public facilities visible from the street makes the Leonardo “much more accessible to the public. People will feel that they’re able to walk freely into the building, without being kept to the perimeter pavement as they are in so many of the buildings in Sandton. .”

The Leonardo comprises several major public levels areas off the street, with retail and hotel lobbies linked by escalator to an interactive mixed use lobby space, which serve the large conferencing venue and will be home to the reception area for the apartments, penthouse suites and offices, along with a coffee shop and bar.

There are 1 300 parking bays linked by shuttle lifts directly into the seventh floor podium, which features landscaped gardens, restaurants, a bar, a creche, a gym and a spa.

There are also 7 200 m2 of sectional title offices.

Two-hundred and thirty-four apartments will rise up to the thirty eighth level, with the next ten floors earmarked for a luxury hotel to be established in the future, depending on the demand and conditions in the hospitality sector.

Above the development floors are eight penthouses and the Leonardo suite, reaching from the forty-ninth to fifty-fifth levels.

The eight penthouse suites will also have their own gardens.

Of the 234 standard luxury apartments, only 16 remain on the market.

The Leonardo is expected to be complete close to the middle of the year, but the exact opening date is being kept under wraps.