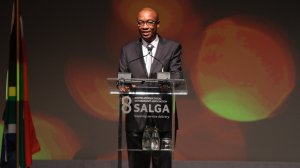 South African Local Government Association (Salga) president Parks Tau has called for an overhaul of the policy and regulations governing electricity supply in South Africa to facilitate a transition towards a more decentralised electricity system.

Addressing a well-attended Salga Energy Summit in Sandton, Tau said the shift from a centralised supply model could not be avoided, nor could a fundamental restructuring of the “unsustainable” large-scale utility business model.

However, the rules needed to change to allow for decentralisation, as well as to enable traditional electricity consumers to play an active role in the production, storage and sale of power into the grid.

Government should take the lead by creating an enabling policy framework and by coordinating, across sectors, to ensure the transition is embraced and institutionalised.

“To accelerate this process, we need innovation in our business models, in market design and in models for cooperation. We must also create the right conditions and certainty for investment,” Tau said.

The call for a new policy framework found broad-based support, with several local government leaders expressing frustration about the difficulty associated with securing a licence for municipal generation projects.

Polokwane executive mayor Thembi Nkadimeng revealed that 14 municipalities were currently being prevented, owing to policy and regulation, from securing licences for their renewable-energy projects. The City of Cape Town had taken the Department of Energy to court for preventing it from contracting directly with independent power producers.

The policy uncertainties in the sector were further highlighted when Gauteng Infrastructure MEC Jacob Mamabolo announced that the province would push ahead with the roll-out of a rooftop solar programme, which would take provincial government buildings off the grid.

Mamabolo said the project could involve an investment of R5-billion and could result in 500 MW of renewable capacity being installed across provincial schools, clinics and office buildings. The Gauteng government also aimed to ensure that the panels deployed were manufactured in the province.

Grid defection, he said, had to be dealt with along with the current impasse in licensing of municipalities to generate more electricity.

The summit, Tau said, would seek to improve the understanding among municipalities of the economic, legal and financial implications of the transition and allow municipalities to provide input on a legislative framework that will assist in aligning national and local energy planning. Emphasis was also given to exploring how the energy economy could stimulate job creation and economic development.