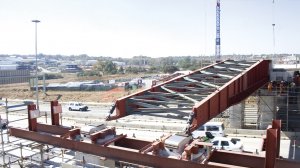 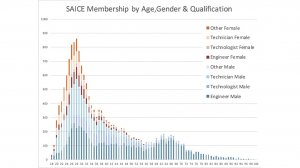 Civil engineering voluntary association and learning institution, the South African Institution of Civil Engineering (Saice) has initiated a long-term expansion strategy to cater to the needs of its members according to their specific member segment, such as segments for students, graduates or more experienced engineers. This will allow the institution to develop policies that address gender diversity and inclusivity in the built environment industry.

To achieve this, a think tank session was hosted last year in November during which various industry leaders from diverse backgrounds shared their thoughts on what the ideal way forward would be. Saice’s first diversity panel was then created through which the institution could implement its Growing Forward strategy.

The strategy consists of seven key areas that are intended to provide more appropriate value for the various categories of Saice members through projects and campaigns.

These seven key areas involve spreading awareness about practitioners from diverse backgrounds, promoting ethics in the civil engineering industry, advising on key issues of national importance, creating an awareness of and support for science, technology, engineering and mathematics (STEM) education, and maintaining the status of the profession and adding value for its members.

The last two key areas involve programmes which support university students and graduates, as well as assisting professionals in becoming specialists in their respective fields.

“Our membership is transforming organically as a diverse group of graduates, in terms of race and gender, joins the job market and gains experience through work,” states Saice membership committee chairperson Bridgette Kerst.

“These numbers only tell one side of the story and can’t be viewed in isolation. Key to understanding how the future looks for civil engineering is to look at combined race, gender and age for male and female members,” she argues.

Each of the seven key areas within this strategic plan will be allocated to an industry leader, known as a Saice Champion. The responsibility of this chosen leader would be to oversee and execute the initiatives of his/her allocated segment with representatives from Saice’s relevant branches, divisions and national office.

“We look forward to tackling as many of the challenges faced in STEM and civil engineering head-on so that we can advance progressively in 2019 and beyond,” states Saice acting CEO Steven Kaplan.

An aspect of education that will have a significant impact on the future of the civil engineering industry is the integration of the Fourth Industrial Revolution (4IR).

“Meeting the 4IR head-on is a significant task, nowhere more so than in South Africa, where we need to train our learners in the skills of the jobs of the future. As artificial intelligence (AI) and robotics slide into our lives, jobs will be reinvented, and we will have to be agile to stay ahead,” states Saice president Brian Downie.

He also recalls South African President Cyril Ramaphosa’s State of the Nation Address in February this year, during which he announced government’s plan to provide every schoolchild with digital textbooks and textbooks on a tablet device over the next six years.

Ramaphosa also advocated for computer programming to be made compulsory at public schools, underlining the need for data analytics, coding, the Internet of Things, blockchain and machine learning.

Downie points out that the University of South Africa has partnered with the Department of Basic Education (DBE) by making available its information and communication technology laboratories throughout the country for the training of teachers in coding.

Downie also notes that Basic Education Minister Angie Motshekga announced in February this year in a joint sitting of Parliament that the DBE would introduce a robotics curriculum for Grades R to 9.

The initiative is expected to be piloted at 1 000 schools across five provinces, and will start in the 2020 academic year.

“The curriculum will have a strong foundation in engineering and will enable learners to build and operate robots through programming code. This robotics curriculum will need makerspaces to provide hands-on, creative ways of encouraging students to design, experiment, build and invest,” she asserted.

Downie adds that Saice is collaborating with the DBE on education through online learning, emphasising the initiative to provide a tablet for every child and how this correlates seamlessly with the collaboration.

“There is no alternative. If we do not embrace all the new technologies, then we will slide further into joblessness. Each aspect of 4IR has a role to play in employment and entrepreneurship.”

With this growing emphasis on education, Saice Professional Development and Projects MD Allyson Lawless highlights the importance of educated graduates finding work opportunities, and the role which Saice will play in this.

One element of support offered by the association is referred to as “Kickstart Your Career”. This includes speed-mentoring and mentoring days, both of which enable graduates to gain advice from more experienced engineers.

The association also plans to introduce an “Ask Saice” portal, which will provide technical information and videos to enable graduates to ask questions about topics which they struggle with, this year.