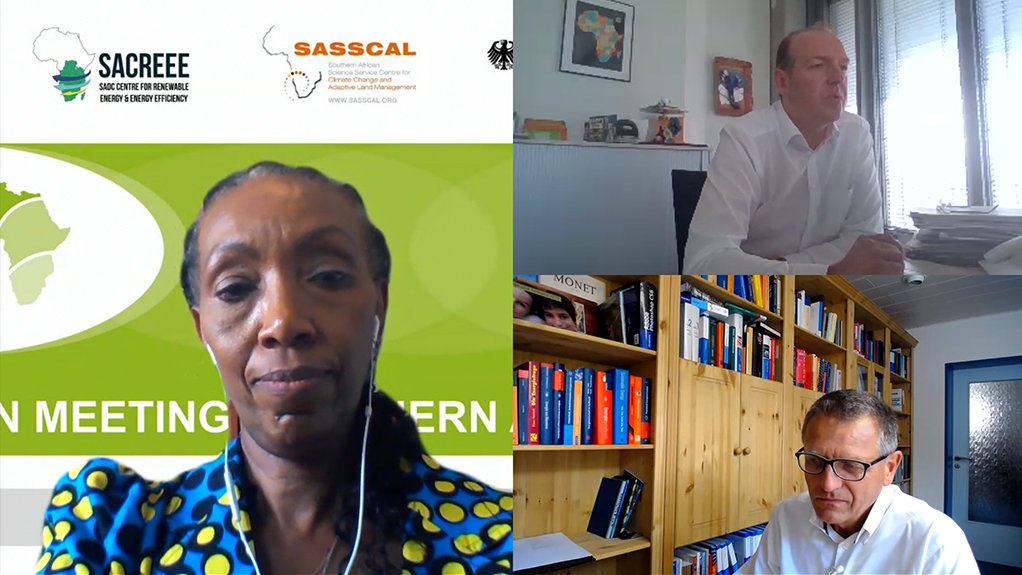 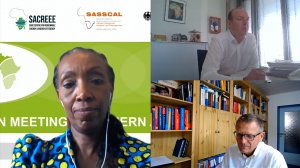 BMBF is implementing H2 Atlas-Africa in Southern and West Africa with Sasscal as its partner in Southern Africa, and Sasscal, in turn, has a memorandum of understanding on the initiative with the SADC Centre for Renewable Energy & Energy Efficiency (Sacreee).

In focus is green hydrogen, which is a clean form of hydrogen with a no-carbon footprint.

“Furthermore, green hydrogen can be stored, it can function as a carrier and it can be used directly for heating and cooling and also in production processes, so that we can push forward decarbonisation,” Roevekamp told the media conference in which Creamer Media’s Engineering News & Mining Weekly participated.

On the legislative framework required for green hydrogen to be developed, Sacreee executive director Kudakwashe Ndhlukula said that the Sacreee, besides providing technical inputs, also had convening powers to bring in the governments of the region and also to stake the initiative to the governments so there is total buy-in.

Activities were being aligned towards developing SADC into an industrialised region and renewable energy had been identified as being an opportunity to realise the industrialisation goal.

Said Roevekamp: “If we look on the global level, we see that there is a world market for green hydrogen and also for its derivatives, such as ammonia and methanol. All this happened much faster than many people expected so green hydrogen will be able to be produced at the same cost of fossil or blue hydrogen, and this could be achieved in the next two or three years.

“Therefore, I think the timing of our Green Hydrogen Atlas-Africa is right and the initial outcome from the atlas will provide evidence-based information for policy-makers, investors, companies and researchers.

“We’re going to identify green hydrogen hotspots in the region and give information on relevant aspects like infrastructure and ecological impacts. Green hydrogen has strategic impact for the Southern African Development Community region, not only for the countries but also for the companies. From our point of view, there’ll be historic opportunities for the whole region.

“The first thing I’d like to mention is that the SADC region can place itself as an exporter in a trillion-dollar market for green hydrogen production. The first indicator that we see is that there are excellent conditions for the production of green hydrogen.

“Harbours, for example, are really a key success factor if you think of the transportation in other regions of the world.

“The last point I would like to make is that the green hydrogen atlas will improve research capacities in the region, which is necessary for the adaptation and mitigation actions in response to climate change,” Roevekamp said.

Olwoch said the green hydrogen initiative project puts SADC at the centre of finding a long-term solution for emission reduction, a global pursuit.

“A group of our scientists will be provided an opportunity to spend three months in Germany to experience first-hand how green hydrogen is manufactured and to interact with German scientists in the study of models,” she said.

On Sasscal chosing Sacreee as a strategic partner for H2 Atlas-Africa, Olwoch added: “We do appreciate the partnership. Reducing duplication of effort is one of our key roles in the region and will also be more cost effective.

“Sasscal would like to thank BMBF for its innovative initiative. The Euro 1.5-million is not small but at this moment it’s not only the money. We’re just looking at the long-term outcomes of this project. We’re excited, we’re partners and now we have the funding and we’ll move forward,” Olwoch added.

Stolten said in response to Engineering News & Mining Weekly that envisaged for the production of hydrogen in water-scarce regions like SADC is seawater desalination.

“Generally I can say that if you look into hydrogen generation systems, including wind turbines, electrolysis and liquefaction, you’ll find that while seawater desalination is not so cheap for drinking water, it makes up on 1.5% of the total cost when hydrogen is involved, which is negligible. Seawater desalination in these systems is effective and we always check to see whether we can use it rather than using existing water tables. Water tables in our systems analysis are only used if they are fully replenishable,” Stolten said.

“We see this project as one of the key pillars to support the industrialisation of the region. We also want inputs for industrialisation like fertilisers, the use of hydrogen for heating in different steel plants and other ferrous and non-ferrous metals plants, and also the use of hydrogen for transport. We would like to align this green hydrogen project to SADC’s overall industrial strategy as well as any other initiatives that are arising at regional level,” Ndhlukula said.

On water for hydrogen production, he said that other bodies, such as the SADC Ground Water Institute, were also being brought on board: "There are quite exciting studies that are taking place to identify underwater bodies that can potentially be tapped as well, but we can’t say for sure at this stage whether this will also be one of water for hydrogen generation," Ndhlukula added.

“But if you discuss the polymer electrolyte membrane electrolysis, then two platinum group metals (PGMs) are needed, First of all platinum and then iridium, which is very, very rare. Iridium is a tiny by-product of platinum extraction. In the past it has always been said that there is not enough platinum or might not be enough iridium. I don’t see that point. We investigated it. But it would definitely be something that would increase PGMs demand and also PGMs mining.

“The other side of the story is that with pure hydrogen, you’re also going to get fuel cells, and fuel cells need platinum, as well as sometimes some addition of ruthenium, but basically platinum as the catalyst. So, it will not only increase the demand from the side of the electrolysis, but probably much more on the side of the application, where you have, in transportation, fuel cells and in other areas fuel cells, which would come in early. There are already fuel cell cars available that you can buy now that use PGM metals,” said Stolten.

As Mining Weekly reported earlier this year, South Africa has been examining its competitiveness as a potential supplier of green hydrogen to Japan, and more recently to Europe.

Green hydrogen is enjoying unprecedented political and business momentum, with the number of policies and projects around the world expanding rapidly, says the International Energy Agency, which adds that now is the time for potential green hydrogen providers to scale up technologies and bring down costs to allow hydrogen to become more widely used.

Japan’s required price level of ¥30/m3 of hydrogen translates into about $3/kg, which can be achieved by South Africa.

South Africa has superior sunlight and prime wind power and could use the Coega port in the Eastern Cape as a green hydrogen production and exporting base.