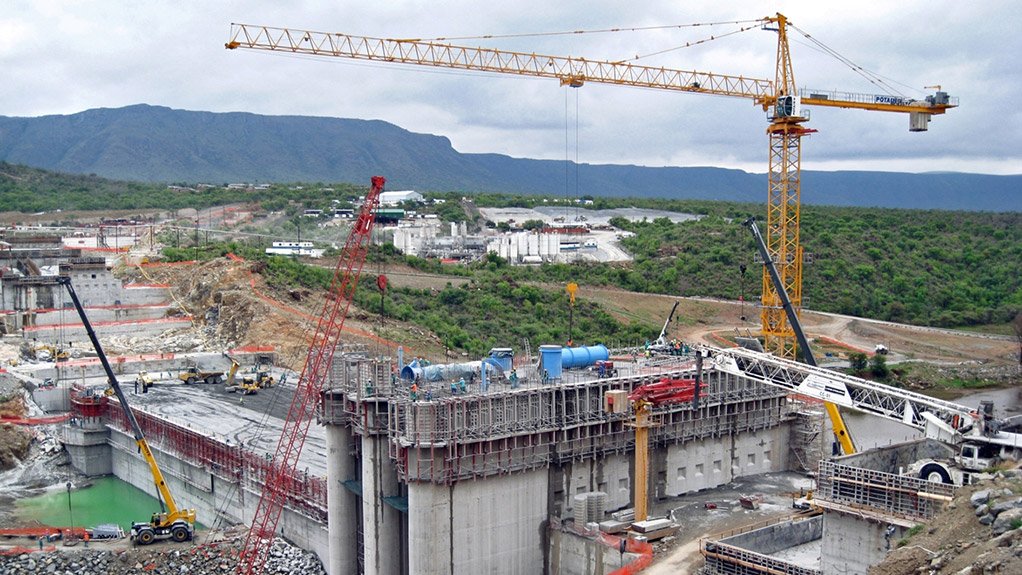 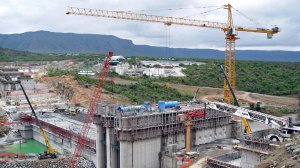 Company Announcement - Potain tower cranes will dominate the horizon on a major project by the Department of Water and Sanitation to raise the Clanwilliam Dam wall. This will be the largest dam construction project undertaken by DWS after the De Hoop Dam project, where Potain tower cranes were also deployed. The latest project is a showcase for local supplier SA French in using tower cranes for such complex civil engineering projects.

SA French, a division of Torre Industrial Holdings, will supply a MD 485 tower crane, which is adaptable to a variety of job sites due to its modular design and efficient load handling capabilities. In addition, its Optima controls provide for smooth speed changes and high productivity. It will also supply a Potain MC310 crane, expected on-site in early May. The 25 t Potain MD 485 tower crane will pour the bulk of the concrete work at the Clanwilliam Dam, supplemented by the Potain MC 310 for smaller lifts.

The MD 485 tower crane was used with great success at the De Hoop Dam project on the Steelpoort River near Burgersfort in Limpopo Province. It has been dismantled and transported to the Clanwilliam Dam on the Olifants River in the Western Cape. The extensive experience that SA French gained at De Hoop will facilitate the construction process at Clanwilliam and help drive down the overall cost for the client.

“The methodology of using tower cranes for dam construction is largely cast in stone, and a lot of the knowledge and experience we gained at De Hoop and other DWS dams will be easily transferrable to Clanwilliam,” says Quentin van Breda, managing director, SA French. A major accomplishment at De Hoop was relocating the Potain MD 485 tower on two separate occasions. An example of SA French’s proactive approach to meeting the specific requirements of its client was its recommendation that simultaneous erection of the two tower cranes will result in a considerable cost and time saving. The company will have a team on-site for the commissioning process, while DWS will use its own operators. “Part of our in-house offering is to train any certified operators that the client may require,” van Breda says.

Upfront planning is critical in terms of adherence to all health and safety requirements, as well as ensuring that all lifts are carried out as accurately and as quickly as possible. This is a key feature of the total lifting solution offered by SA French, which includes its considerable expertise backed by an extensive reference base in complex engineering projects, all of which is complemented by Potain’s market-leading tower crane technology.

SA French’s longstanding relationship with DWS, starting with the former Department of Water Affairs on the Braam Raubenheimer Dam near Lydenburg in 1982, was cemented by its successful involvement at the De Hoop Dam. This relationship played a vital role in it securing its latest contract. “Our long-term relationships add additional value in terms of our comprehensive service and support,” van Breda says.

Tower cranes are particularly suited to dam construction, as such projects require very specific lifts at certain radii. The number of lifts required on a dam site in terms of piping, valves and pumps does not justify the use of a crawler crane from a cost-effectiveness perspective, van Breda notes. “More often than that these lifts relate to the massive pipe structures that need to be handled and put in place. The only cranes that can handle these structures efficiently in terms of the combination of the height and the required radius are tower cranes,” van Breda says. Some of the pipe sections at De Hoop, for example, ranged from eight to ten tons.

The Clanwilliam Dam project is expected to use Roller Compacted Concrete (RCC), which DWS pioneered at De Hoop. This comprises large, dry aggregate in the form of rock, sand and cement that is compacted to form the bulk of the dam wall. RCC is a far more cost-effective option than traditional concrete dam walls. It also allows for more compact and sophisticated spillway sections, which necessitates the use of tower cranes in these constrained construction sites. The main driver for the Clanwilliam Dam project is believed to be the burgeoning viticulture industry in the Western Cape. The concrete gravity dam was built originally in 1935 and raised in the 1960s by the addition of 13 crest gates with pre-stressed cables. The dam wall is currently 43 m high, with a net storage capacity of 122 million cubic metres.

The latest project aims to increase the Full Supply Level (FSL) of the dam by raising the dam wall by 13 m, providing an additional 70 million cubic metres of water a year to downstream farmers. This will also involve realigning a portion of the N7 road. In addition, the gravel access road on the eastern side of the dam will have to be realigned to allow for maintenance access to the top of the dam wall.

Van Breda comments that SA French is keen to look at dam construction projects in the rest of Africa. “Wherever possible we aim to build on the existing Torres Industries Group infrastructure in conjunction with Elephant Lifting Equipment, focused on areas where Torre has a presence, such as West Africa.” The Torre Industries Group recently added Elephant Lifting Equipment to its Plant and Equipment Division, which includes SA French, Manhand and Kanu Equipment.

SA French and Elephant Lifting Equipment will ultimately fall under the umbrella brand ‘Torre Lifting Solutions’ which, combined with the extensive distribution network of the Torre Industries Group, will allow it to offer a total lifting solution from consumables to tower cranes and electric overhead cranes to its customers in South Africa and across the continent.