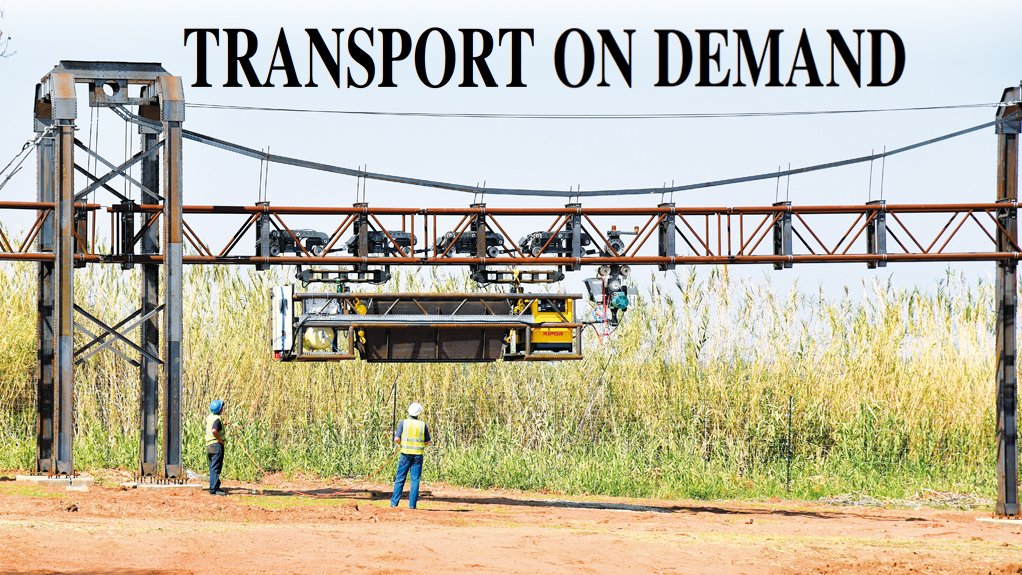 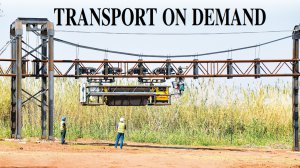 South African company Milotek will later this year start construction of a fractional rapid transit (FRT) system at a private coal mine in Mpumalanga.

Milotek director and inventor Andries Louw believes this system will revolutionise the way goods are moved in the mining industry and also, eventually, in a number of adjacent industries.

Another iteration of the same technology – podcars, or personal rapid transit (PRT), through the company Futran Podcars – may also change the face of public transport in South Africa, he says.

Louw’s faith in the transport system has been underwritten by the construction of a test track near Brits, where he showcases the technology through the backing of some heavy hitters, such as Imperial Group, which is the majority shareholder in Milotek.

The company’s ownership structure may change soon, however, with a black- economic-empowerment (BEE) company in line for a 30% share of the Milotek business.

HOW IT WORKS
The FRT system uses an elevated track network with switches that have no moving parts, from which moving stock – as opposed to rolling stock on rail tracks – is suspended.

The FRT system is designed to transport a range of pod types, carrying loads of between a few hundred kilograms and 20 t, all using the same track type and motorised units.

By using a lightweight, superstrong, elevated track network, the system can be deployed using road and railway reserves, travelling over obstacles and sensitive areas such as wetlands and rivers, high enough to avoid animals and people, and small enough not to be visually disturbing, says Louw.

In the mining industry, the system can be deployed to haul ore between openpits, washing plants, overburden dumps, stockpiles, rail sidings, ports, mills and power plants.

“The system can run from horizontal to vertical and everything in between. This means that, in the case of underground mining, the system has the potential to transform the industry. Ore can be picked up at the face and taken straight to the surface without rehandling it, while cement, tools, materials, people, explosives and machinery can be taken into and out of the mine using the same system,” explains Louw.

“Each pod has a programmed job card, which means it can execute a task completely different from the pod in front of it. The pods are not connected to each other. The pods also run on demand, not on schedule, so there is no idling truck or conveyor belt waiting to be fed. It’s like Uber; you call a pod when you need one. Also, none of the pods require a driver.

“Another advantage is that the system can run over the existing ‘right of way’, such as a road. There is no need for expensive land acquisition.

“This is our sweet spot,” says Louw. “Our flexibility – other advantages include lower costs and low maintenance costs, as there are few moving parts.
“We are also environment friendly, as we are working at operating the system using solar power, with solar panels situated on top of the elevated structure.”

The system currently requires power equivalent to 30 kW for each moving stock unit.

“If the distance is right, and the volumes, and we can include solar power, we can offer a positive price comparison with other modes of transport. The suspended tracks create massive real estate for solar panels,” says Louw.

The aim is for the moving stock to travel at 50 km/h.

The FRT system can transport as much as 250-million tons a year along a single corridor, and more when a third line is added to the superstructure, says Louw.

“We can build the track in line with capacity demands from the mine.”

THE MPUMGALANGA TRIAL
While the Brits site may prove that FRT works on a technical level, it will be the Mpumalanga coal mine trial that will truly determine the commercial viability of the system.

The company will fund and build the 2.7 km FRT system, with a capacity of 350 000 t a month, travelling from the coal wash plant to the rail siding, over the rail track and a small hill.

“We put in the system – which is modular – and then charge a per-ton rate, which includes maintenance. The contract runs over 10 to 20 years, allowing us to recoup our capital expenditure. At the end of the contract, we take the system and leave, or renew the contract,” says Louw.

“We think we can offer a 30% to 50% saving, compared with trucks, on this particular application, as the rail track and hilly area would have forced trucks to make a rather expensive detour.”

The steel used to construct the FRT system will be a combination of local and Swedish steel.

The upright bars will feature one of Louw’s international patents, the Solomon’s knot, which is a specially formed sheet steel tube, filled with concrete once erected. This invention is aimed at bringing down the cost of the system and reducing the threat of theft.

“The Solomon’s knot comes in at half the cost of a universal beam.”

The structural strength of the bar was tested at a local university, with “resounding success”, notes Louw.

He believes Milotek can deliver significant support to the local steel industry should demand for the FRT system take off.

PODCARS
The PRT system, which is housed and executed within the Futran Podcars company, replaces the goods-carrying moving stock with people carriers, or podcars, in a more sophisticated system that offers personal cabins, as well as air-conditioning.

The planning is for the elevated, suspended pods to carry between six and eight people over the existing ‘right of way’, such as roads or sidewalks. The pods can stop at stations, also located above sidewalks or roads, or within buildings.

These pods can be called on demand, through a smartphone app, with each pod able to follow its own route and not that of the car ahead, says Louw.

The University of San José, in California, has agreed to build a 500 m PRT test circuit with two stations on its campus, using three pods, he adds.

“They noted that we were the most advanced with our podcar system, compared with other developers in the world.”

Louw says he is in discussion with two South African universities, as well as the Council for Scientific and Industrial Research, to partner in the further research and development of the system, as he would like South Africa to “become the centre of excellence for the PRT system”.

“We are also in negotiations with one of the two universities to build and open a test track of its own, hopefully by the end of 2018.”

Futran Podcars is also actively engaging with various cities in South Africa with a view to confirming the first city deployment on home soil before the end of this year.

“The system holds the promise of transforming public transportation and it is a matter of pride for us to have the first deployment in South Africa,” says Louw.

JOB LOSSES
One factor that may hamper podcar development in South Africa is the perception around possible job losses in the public transport space, as the system requires no drivers. Minibus operators were not enamoured with the recent roll-out of bus rapid transit systems, for example.

A PRT system, however, creates a number of job opportunities at stations and in the maintenance arena, as well as in the small business sector, says Louw.

Tour guides can use the system, for example, or personal couriers can deliver small packages and lunch specials to offices with a day pass that allows them access to the system for a 24-hour period, he adds.

Louw is also optimistic that the roll-out of FRT and PRT systems locally, and in Africa, will create a number of jobs in the manufacturing and steel sectors.

The FRT could also contribute to ensuring the profitability and longevity of mines.

AFRICAN CITY CONGESTION
Futran Podcars, which also has a BEE partner interested in investing, aims to roll out PRT systems in a number of African cities, says Louw.

The company has already presented its business case to the African Development Bank.

“By 2050, African cities will have three citizens for every one they have now. This means Africa has to, over the next 35 years, build cities for an additional 800-million people,” says Louw.

“To put this in perspective, China currently has an urban population of 800-million people.”

Louw believes the Futran system offers a distinct cost advantage over all other modes of public transport.

The speed of travel will be around 70 km/h.

The aim is also for the pod to take its occupant directly to his or her destination, with no stops required at nondestination stations.

LESSONS FROM IT
Louw is a former business unit MD at EOH – which means his experience is predominantly information technology (IT) related.

Although it may seem that his FRT concept has appeared from nowhere, this is not the case. Louw says he has been developing the concept for years, refining his original idea of a magnetic levitation, or maglev, tube into the current FRT system.

After presenting the concept at a handful of international conferences, he became discouraged by the criticism levelled against the FRT system, often from those interested in building a similar system.

“Everybody will tell you why it won’t work, so I refined the concept, filed the patents, and then built a test track to show it can work.”

A boost in 2014 from Imperial’s innovation fund assisted Milotek in rolling out the test track.

“We decided to chase the mining market first, as this would mean we could prove the system with lower-risk cargo, rather than people.”

He said the fast-moving world of IT has come in handy in the field of engineering.

“IT teaches you that there is no such thing as impossible. It also teaches you that, if you take too long to roll out [an] innovation, someone else will roll out a similar concept very quickly. Milotek went ahead and built the track, made a few mistakes, corrected them and now has a functioning test track.”