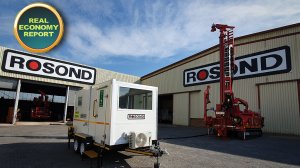 In an anticipated move that will not only boost women participation in the mining sector but unlock machine learning and data analysis that could further enhance productivity and efficiencies, a range of newly manufactured automated rigs have made their way to the Northern Cape.

The final batch of 28 newly manufactured advanced drilling rigs under a R2-billion multiyear contract with mining services group Rosond has been delivered to Anglo American-controlled Kumba Iron Ore in the Northern Cape, with expectations that the new range will be fully operational early in 2021.

The drills offer heightened safety, owing to less manual intervention during operations, and operators are housed in a climate-controlled, airconditioned control room.

They have also been developed to transform the way drilling is done, bringing together automation, software and data analysis technology to create a new-age drilling rig as Rosond starts transitioning into a drilling technology company.