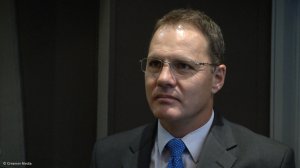 JOHANNESBURG (miningweekly.com) – It will be tough for dump retreatment company DRDGold to beat this year’s results.

The Johannesburg- and New York-listed company’s market capitalisation has rocketed from R700-million to  R3.7-billion in a matter of months, reminding investors of its Roodepoort Rocket nickname of old, because of the way it takes off when the gold price rises.

After generating R308-million in free cash flow, the hedge-free, debt-free company dished out R260-million to its shareholders.

“It was an exceptionally good year,” DRDGold CEO Niël Pretorius said on Tuesday when the company announced a dividend six times higher than last year’s.

In addition to high-grade throughput at Knights, it had the huge benefit of a gold price “which just came from nowhere and shot the lights out” at R650 000/kg at one stage. (Also watch attached Creamer Media video).

The 2016 financial year is going to be a hard act to follow but the company’s response to this year’s gushing free cash flow will please its shareholders.

They will also know now that when there is big cash flow, they will be on the receiving end of it.

DRDGold CFO Riaan Davel described the year as “the best cash flow generating year in many, many years”.

He described the six times higher dividend payout as being “off the charts”.

Cash flow from operations was 40% higher on an operating profit margin of 20.6% and low rand-per-tonne throughput at the company’s Ergo gold plant on the East Rand.

But to put the high dividend payout in perspective, the money that DRDGold spends on lowering dust exceedances at the tailings dams, by vegetating the dumped waste mine material, still exceeds the total it has paid to its shareholders in dividends – an indication of awareness of what has to be done to be sustainable.

To relieve demand on potable water from Rand Water, the company treated nearly a million litres of sewage water this year.

The introduction of new technologies enabled it to increase the throughput of material at its Ergo plant by 5%.

The company’s knowledge-based workforce rewarded the company this year by agreeing without any disruption to another two-year wage agreement with additional benefits.

“We are increasingly finding more interaction of employees at operating level on the shop floor. We’re seeing some system improvement coming through and that is something that bodes well for the future. It's key to our endeavour to have a knowledge-based labour force that can take decisions as deep into the organisation as possible, and know how to respond appropriately to events,” Pretorius noted.

Top-up finance is being provided to make home ownership a real possibility for those of its employees who do not have security of tenure.

The company this year offered 1 300 courses to employees, including one on financial literacy to help them remain financially secure.

It spent R15-million on youth education and poverty alleviation projects.

Flashed up on to a large screen during the presentation of results was the picture of a person working in a vegetable patch at an informal settlement not far from the company’s operations.

“On a piece of land the size of a door, you can feed a family of four,” said Pretorius.

More than 500 families have taken up the practice of growing their own vegetables in this way, with some opting to become bona fide vegetable farmers.

YIELD AND COST PER KILO

Pretorius warned that a blind eye could not be turned to the declining trends in yields and cost per kilogram of gold produced in the last financial year, when all-in sustaining costs rose by 12.2%.

“If we want to be around going forward, we’ve got to do the right things to ensure that our volume throughput capacity is enhanced and that we have that in hand,” he said, adding that the national electricity grid was becoming an increasing problem.

While the State power utility is producing sufficient electricity for South Africa, the ability to get the electricity to the different points where it is being consumed is becoming increasingly difficult.

The company has put more than adequate emergency electricity generation capacity in place to cope with the regular power interruptions that it is experiencing but the impact is on the consistency of throughput.

“This old lady wants to dance to a steady waltz. She doesn’t like the cha-cha and then the tango and then back to a waltz. You’ve got to keep things rhythmic and steady,” he analogised about the company's Ergo gold retreatment plant.

Extraction efficiency is being upped to be able to cope with lower-grade throughput.

“We’re still leaving some gold on the table but going forward I think we will have to improve the efficiency with which we treat specifically the low-grade material.

“The Ergo plant’s hitting the target. We are getting the desired production residue that we set out to achieve. But there is more room for improvement and that is a catalyst for longer-term sustainability and enhanced profitability if we can crack that nut,” he added.

For the next seven months through to February, there will be clean-up at a depleted West Rand site, putting pressure on costs prior to mining at a new site south of Johannesburg, which has already been capitalised.

This new material is promising to be cheap to mine.