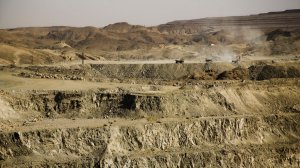 JOHANNESBURG (miningweekly.com) – The Australian Greens party has lashed out at mining giant Rio Tinto, after it emerged that a leach tank at its Rossing uranium mine, in Namibia, had failed earlier this month.

The news came shortly after Rio subsidiary Energy Resources of Australia (ERA) reported that a mixture of slurry moved outside the bunded containment area of the processing plant at its Ranger mine, in Australia’s Northern Territory, following the failure of a leach tank.

Rio reported that at Rossing, the spilled slimes were channelled in trenches and contained in a holding tank, with no environmental impact. The spilled slime would be recycled in the processing plant.

Milling operations at Rossing had been suspended, but would restart once the failed tank had been isolated from the production process. Production in other areas of the mine has not been affected.

In Australia, ERA was waiting on clearance from both the federal and state governments to restart processing at Ranger.

“In addition to the toxic catastrophic at Ranger uranium mine - the latest in over 200 spills, leaks and licence breaches within the Kakadu National Park precinct - Rio is also dealing with ‘structural failure’ of a leach tank at their processing plant in Namibia,” said Australian Greens Senator Scott Ludlam.

“Rio is now on the world's radioactive radar - both here and in Namibia where worker and environmental safety standards are much lower than at Ranger.”

Ludlam opined, however, that it was not only engineering structural failure in leach tanks that was posing a problem. “This industry is tanking economically and it's time to shut it down and clean up these toxic blots on the landscape before they do more damage.”

Ludlam also questioned the wisdom of considering yet another uranium project in Western Australia, as ASX-listed Energy and Minerals Australia works to get its Mulga Rock project off the ground.

“As the federal government struggles with one leaking uranium mine in the Northern Territory they’re now facing new proposals in Western Australia. The uranium industry has failed to meet public expectations, failed to meet government regulations and failed to operate safely.”

The political party has launched a campaign against uranium mining in the Karlamilya National Park.