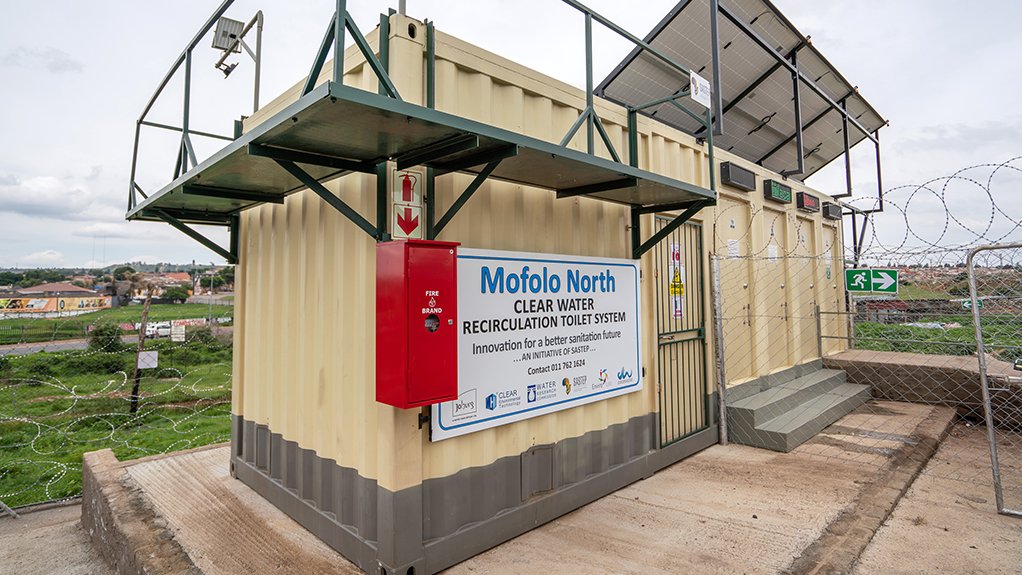 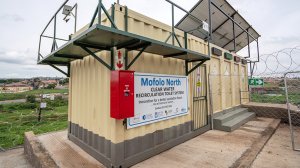 As a water-scarce country, a rethink of South Africa’s waterborne sewage system is inevitable, owing to the threat of climate change, with the country’s overall water security partially hinging on its sanitation security.

“WRC research shows that the country’s water consumption per capita is 250 ℓ/d, compared with the world average of 173 ℓ/d. A large proportion of this consumption can be attributed to sanitation use and leaks. Ideally, water consumption for sanitation in a water-stressed country should be zero at best, but a great shift in behaviour would be required, along with changes to the current infrastructure.”

Many of the country’s wastewater treatment works (WWTWs) are falling into a state of disrepair, compromising their effectiveness in treating waste streams and increasing the risk of waterborne diseases.

The contamination of groundwater aquifers by poorly constructed pit latrines used by informal settlements mushrooming across cities, owing to rural-urban migration, is compounding the situation.

Large volumes of potable water are also used to transport waste to WWTWs, with pumpstations along the route compensating for pressure losses. Subsequently, further energy and resources are used to separate the different waste streams that comprise wastewater before treated water can be released into the natural watercourse, says Akinsete.

“The volume of potable water used in this process is unsustainable because South Africa is a water-stressed country, with recent drought exacerbating the situation, placing significant impact on our current ‘flush-and-forget’ paradigm.”

Reducing flushing volumes will help relieve demand for potable water used in sanitation, with technological advancements making flush volumes of between 2 ℓ and 3 ℓ possible. However, the adoption of water-saving flushing toilet pedestals has been low, despite the presence of local manufacture, emphasises Akinsete.

The introduction of supporting regulation and policy by the Department of Water and Sanitation (DWS) would help fast-track the adoption of such technologies, he adds.

Akinsete says a subset of nonsewered sanitation technologies, such as full water recirculating systems, can limit the water and energy used in the reticulation and processing of faecal waste.

For example, such a system – manufactured locally by SASTEP commercial partners, such as Enviro-Options and WEC Projects – can provide off-grid waterborne sanitation that is nonsewered with net-zero water use, he explains.

Many nonsewered sanitation systems are prefabricated and modular, and can be deployed faster and more easily than civil-work-intensive WWTWs. While these systems are limited in their capacity, compared with those of WWTWs, they can help to alleviate pressure and debottleneck areas in a WWTW.

Full water recirculating systems provide a rapid water- and energy-efficient waterborne sanitation solution; however, as with water-efficient pedestals, he says support from the DWS and other government stakeholders is needed to fast-track adoption.

Meanwhile, the WRC is working with several sanitation industry stakeholders to develop a mark scheme that would allow for local ISO 30500 accreditation and certification.

This voluntary, international product standard, published in October 2018 and adopted as is by the South African Bureau of Standards (SABS) in 2019, provides general safety and performance requirements for the product design and performance testing of nonsewered sanitation systems.

“We are working towards accrediting a couple of nonsewered sanitation systems before the end of the year, together with municipalities, to demonstrate these innovative next-generation sanitation solutions to spur uptake and increase confidence in these systems,” advises Akinsete.

Additionally, the water-efficient toilet pedestal test protocol, developed through the SASTEP programme by the WASH Centre at the University of KwaZulu-Natal, provides a benchmark for testing water-efficient pedestals and enables the verification of flush volumes claimed by manufacturers to create uniformity across the products in the market.

SASTEP is engaging the SABS to update SANS 1733 for water closet flushing systems with low-flushing capacity that operate with flushing cisterns to incorporate elements of the protocol.

The DWS has initiated steps through the National Sanitation Framework to address challenges and ensure equitable water and sanitation service delivery. However, more proactive government policies are needed, as are the allocation of funds by the National Treasury and enabling public procurement processes, to encourage the acquisition of innovative sanitation technologies.