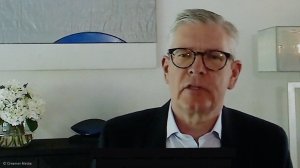 Ericsson’s Börje Ekholm, Patrik Cerwall and Jasmeet Singh Sethi discuss the information and communication technology trends that have been seen over the past few months. Editing: Darlene Creamer

Changing patterns in telecommunications traffic owing to the various levels of Covid-19 lockdowns worldwide are shifting the goalposts for predictions in a post Covid-19 world.

With increasing surges in connectivity demand, information and communication technology (ICT) firm Ericsson president and CEO Börje Ekholm said that an “amazing” transformative change had been experienced over the past two months.

Speaking during an Ericsson UnBoxed Office virtual event, he explained that traffic is up across many networks, without major service degradation, and that resilient telecommunications have never been more critical.

Telecommunications traffic moved rapidly from business areas to residential areas in just a matter of days, particularly as lockdown orders across many countries were issued, with many networks now experiencing traffic increases beyond 20%.

There have also been significant data increases in bidirectional services, such as software and apps for video calls and tools for smart working as workers moved from business hubs to residential, added Ericsson strategic marketing head and Ericsson Mobility Report executive editor Patrik Cerwall.

“The pandemic has changed a lot of things,” he continued, highlighting the dramatic shift in traffic.

While there has been a lot of shifts in both fixed and mobile communications, the biggest change seen is in voice services, with a spike in voice traffic across voice-based second-generation, third-generation and long-term evolution technologies.

The voice traffic has since stabilised, however, it remains higher than usual.

Ericsson cited examples such as voiceover WiFi services increases of 90% for some US-based service providers and 180% in the Netherlands.

Spain, Germany and Switzerland have seen a significant increase in mobile voice calls of up to 50% in recent weeks.

Further, peak traffic moved from surges in the evenings, to experiencing a number of peaks during the day.

With 7 in 10 consumers reporting that the Covid-19 crisis has impacted their daily lives, the role of ICT has become clear.

Currently, 87% of consumers are increasing their online use at home, with an increase in business communications, video conferencing, gaming, social media, work and collaborative applications and online grocery shopping.

Twice the amount of time is being spent on education and e-learning, with three in four parents saying ICT has helped their children, many of whom are currently out of schools owing to closures.

While the traffic increases over the past couple of months are expected to continue, particularly on mobile broadband, the long-term predictions are difficult as it is widely expected that the pandemic will lead to a different way of operating, Cerwall commented.

This may result in a revision in the June edition of Ericsson’s biyearly Mobility Report.

The report is published in June and November every year and outlines the expectations of and industry-leading insights into the future of the mobile world, forecasts of mobile coverage, subscriptions and traffic.

Cerwall cited the predictions of fifth-generation (5G) technology, which the November edition of the report outlined would reach 13-million 5G subscriptions by the end of 2019, 100-million by the end of 2020 and 2.6-billion by 2025.

“5G is interesting in this context. We need to revisit that number, and revise and increase our forecast of 5G subscriptions for the end of this year,” he explained, noting that, by 2025, 5G subscriptions are expected to increase to 2.8-billion.

Meanwhile, Ekholm commented that efficient telecommunications has never been as important as it is during the global Covid-19 pandemic.

However, critical to growth will be stellar network quality and performance, as data reveals that quality networks impact the bottom lines of companies.

“More than ever, connectivity is key. With the spread of Covid-19, fixed and mobile telecommunications networks have become an even bigger part of the critical infrastructure, showing the importance of quality in the connectivity,” he said, noting the reliance on mobile networks for people to stay in touch, access essential services and carry out their jobs.

The study was based on fourth-generation lifecycle data from more than 30 countries, with an analysis undertaken on the correlation between network quality and financial performance.

“In the top half of cases, where network quality is highest, we found that the lead service provider enjoys a higher average Arpu (31%) and lower average churn (-27%). In the bottom half, where network quality is generally lower, we found that some service providers still enjoy higher Arpu (61%) but with higher churn (39%), whiles others have both lower Arpu (-14%) and lower churn (-32%),” the study outlined.

Quality is the cornerstone of successful strategies and commercial key performance indicators.

“It is absolutely abundantly clear that what we do as an industry has never been more important.”

Network quality will be even more important in the era of 5G and the key for 5G success will be a strong ecosystem.

“5G offers service providers an opportunity to gain first-mover advantage and create a significant network performance gap with the competition,” he said, adding that consumers are willing to pay up to a 20% price premium, as long as it is tied to consumer experience, which emphasises network quality.

The next three years will determine the 5G business landscape, he concluded.