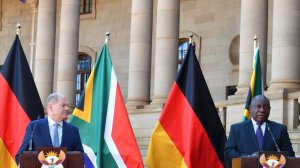 President Cyril Ramaphosa has reiterated South Africa’s official stance on Russia’s invasion of Ukraine, emphasising that engagement, dialogue and negotiation are key to resolving the conflict.

In turn, German Chancellor Olaf Scholz affirmed Germany’s harsher approach, with numerous sanctions having been imposed on Russia, including the halt of oil imports up to the end of this year at least.

During a State visit to South Africa, Scholz spoke on behalf of the European Union (EU) in sharing that, although it was the general position of EU countries to ban oil and other commodity imports from Russia, he acknowledged that some countries were having a greater difficulty in cutting off supply from Russia.

Scholz explained that some EU countries lacked the necessary infrastructure to simply halt imports from Russia, but said this situation was actively being resolved.

He mentioned that Germany, for one, was diversifying its gas suppliers in efforts to become independent of Russia’s liquid natural gas exports. Scholz also confirmed that Germany was supplying weapons to Ukraine, since the country could not accept such forceful actions against another country.

Ramaphosa maintained, on behalf of the African Union, that the region’s preference to conflict resolution was that of diplomacy and dialogue, which it was urging the Russian government to do.

The President hosted Sholz on an official visit at the Union Buildings on May 24, where the two heads of State exchanged views on a number of bilateral and international issues.

Scholz stated that Germany would continue to support South Africa in its development efforts, particularly in the climate change space and in getting vaccines sold in the right markets, and remained encouraged by the 600 German companies represented in South Africa.

With regard to Covid-19 vaccines, Germany had previously announced a commitment to provide €850-million to assist developing countries in increasing vaccination rates, and pledged €50-million to the Pandemic Preparedness Fund, which the Group of Twenty countries had provisionally agreed upon to establish, in April.

Ramaphosa pointed out that South Africa, like many African countries, was struggling to find buyers for vaccines produced on the continent.

Moreover, Scholz said both South Africa and Germany were transitioning their industries towards carbon neutrality, which required investment in new technologies. He mentioned the country would continue to work with South Africa to develop these kinds of technologies, along with the necessary skills.

Meanwhile, Ramaphosa confirmed that Scholz and his delegation would be visiting petrochemicals company Sasol, where Ramaphosa would be launching a historic partnership for the development of carbon emissions reduction technologies, including green hydrogen.