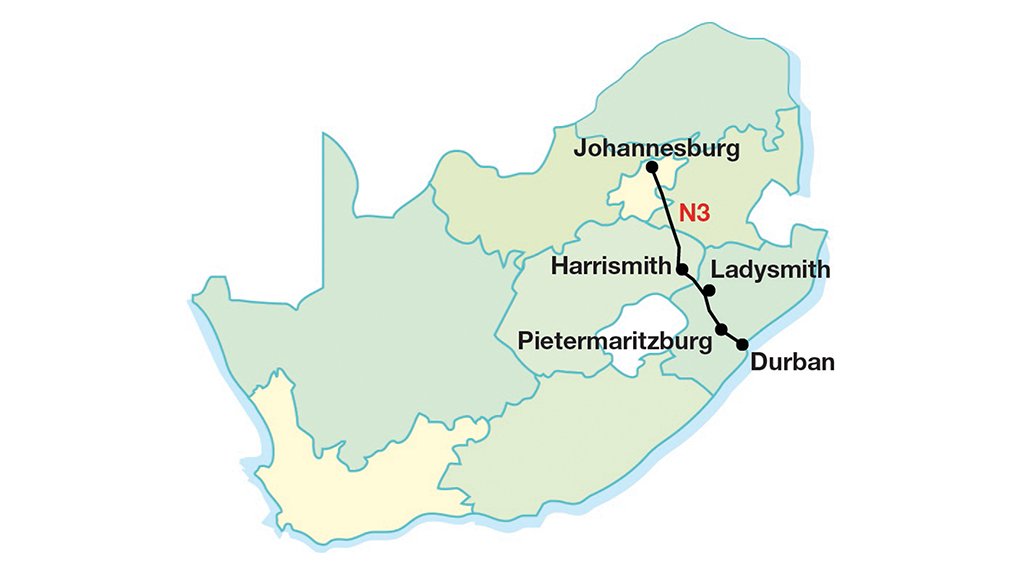 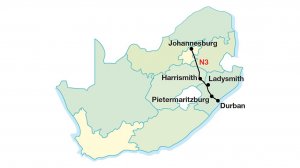 KEY CORRIDOR The N3 runs from Durban to Johannesburg

The envisaged upgrade includes adding a fourth lane in each direction of Section 1 of the N3 from the Mariannhill Toll Plaza, in a westerly direction, to Key Ridge, where the M13 joins the N3.

The upgrade supports government’s strategic integrated projects (Sips), specifically Sip 2, which is urgently needed in view of the increase in heavy-vehicle traffic along the N3 between the Durban port and Gauteng.

Erasmus notes that the estimated cost of construction is R1.6-billion, which may seem expensive for an 11 km project; however, the costs are attributed to the mountainous terrain and major structural works.

He tells Engineering News that substantial structural works are required to widen the road and add a fourth lane on a steep gradient along a side slope in mountainous terrain. This requires extensive earthworks and geotechnical solutions to ensure the stability of the fills and cuts.

The scope of works also includes the widening of the 410-m-long viaduct over the Umhlatuzana river and extensive retaining structures, Erasmus notes.

He adds that the Umhlatuzana river viaduct was initially built using an incremental launched method and, therefore, predicts that widening it may require the same technique.

Despite these challenges, Erasmus enthuses that this is an exciting project to be involved in and one that calls for SMEC to cover all aspects of highway design thoroughly and, with due diligence, to address all the risk issues associated with the difficult terrain.

SMEC was awarded the tender by the South African National Roads Agency Limited (Sanral), in May 2015 and, by November 2015, the firm would have completed its assessment of the preliminary design, which was prepared by a separate service provider.

Once the assessment of the preliminary design is complete, SMEC will start on the detail design of the project, which it plans to conclude by January 2017. The Sanral construction tender for the road is intended to be awarded in June 2017.

SMEC South Africa’s footprint in the region is built on its June 2012 acquisition of multidisciplinary consulting services firm Vela VKE, which, since its establishment in 1947, has undertaken many highway projects in South Africa, including previous upgrades of the N3.

Vela VKE also designed the Huguenot Tunnel, in the Western Cape, and was part of the Gauteng Freeway Improvement Project, responsible for the upgrading of the R21 between Johannesburg and Pretoria.