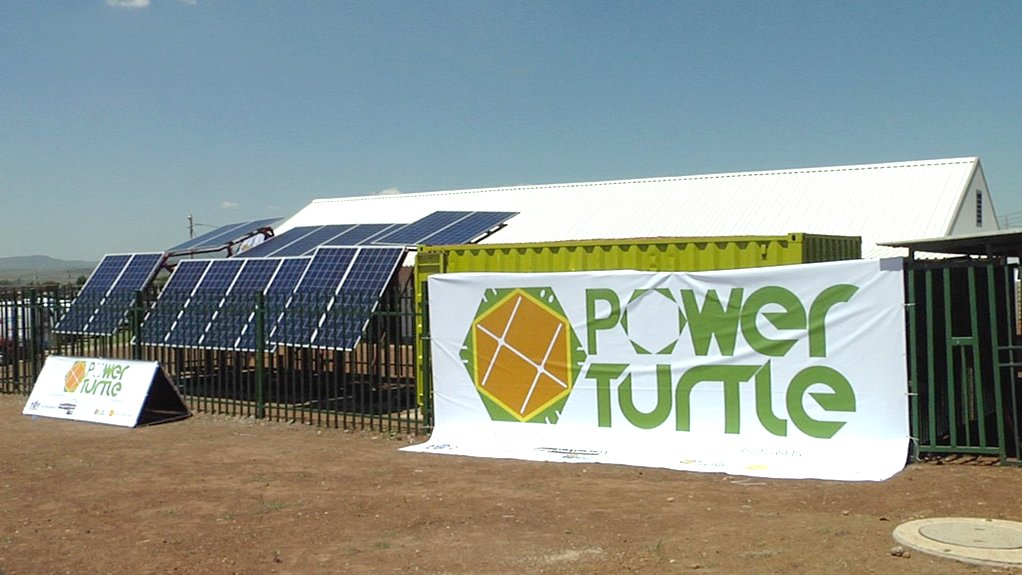 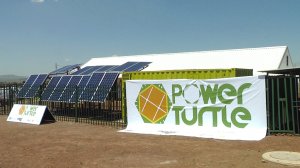 A new modular solar energy solution, the PowerTurtle, which is valued at about R600 000, was launched at Pheasant Folly Primary School, in Palm Ridge, Gauteng, this month.

First presented to the Gauteng Department of Education (GDE) in 2015, the system provides a way for government to provide sustainable and secure energy solutions for rural off- the-gird schools, renewable energy business Ugesi Gold CEO and PowerTurtle developer James van der Walt said at the inauguration of the system.

“The off-grid PowerTurtle incorporates a unique container-based design that provides signifi- cant security for the energy system. Morning sunshine triggers the solar panels to roll out on a specially engineered rail system and unfold in minutes. In the evening, the solar panels slide back into the reinforced 6 m shipping container for safe keeping.”

The PowerTurtle pilot was produced by AM Solar, Ugesi Gold and RexiVista, which completed the project in the past two months. It was sponsored by the GDE, while funding for the pilot was provided by conference company EnergyNet.

The PowerTurtle is the first pilot of its kind to be deployed at a Gauteng school and the first independent power producer investment project for EnergyNet in South Africa.

In October 2015, during its South Africa: Gas Options meeting, EnergyNet launched the ‘Not Just Talking Fund for Energy Access’ with its advisers, Impact Brands Africa, Fieldstone and ERM.

The fund is designed to provide an alternative financing solution for small-scale, beyond-the-grid projects across the continent that will contribute positively in communities – especially in areas of healthcare, education and female empowerment.

Speaking at the event, senior adviser to the President on energy Silas Zimu highlighted the importance of electricity and, consequently, the system, “as energy leads the economy, the economy boosts education and education sustains the country”.

Government estimates that 2 500 off-grid schools in Gauteng, which are typically located in informal settlements across Gauteng, require support.

However, crime and vandalism are the prime factors hampering the adoption of solar PV power in South Africa. While previous pilots have been attempted, only to have the solar panels stolen, destroyed or vandalised, the PowerTurtle, a new generation of the SolarTurtle system, is even more secure than the first pilot launched at Ngangolwandle High School in the rural Eastern Cape, Van der Walt said.

“PowerTurtle is the first step towards secure, reliable and sustainable electricity for schools like Pheasant Folly Primary School,” he noted.

Van der Walt emphasised that the PowerTurtle forms the first phase of a larger vision, in which schools will become energy wells for local communities through the installation of solar kiosks where batteries can be recharged, while providing the basis for future information and communication or Internet-based learning.

He therefore hopes the launch of the PowerTurtle in Palm Ridge demonstrates the potential of secure electricity for the school as well as an energy solution for the whole community.

PowerTurtle is not only in South Africa’s, but also Africa’s, best interests, following requests for the system from Nigeria, Mozambique and Burundi, Van der Walt pointed out.

The plan, therefore, is to supply a pilot for Mozambique in the next year, and, potentially, a pilot in Nigeria, Van der Walt said, stressing that it is vital to gain a firm foothold for the system locally.

“Another aim is to install at least six SolarTurtles and at least 50 PowerTurtles this year, with the prospects of doubling this capacity each year as confidence in the concept is established,” he concluded.