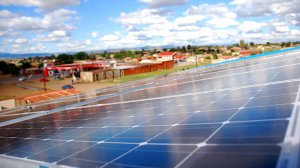 Industry has reacted positively to revelations that Energy Minister Jeff Radebe has written to the National Energy Regulator of South Africa (Nersa) indicating that it should begin to license small-scale embedded generation (SSEG) projects with capacities of above 1 MW.

Business Day reported on Wednesday that Radebe had written a letter to Nersa informing the regulator that it can consider granting licences to SSEG projects, with a combined capacity of 500 MW, without the developer having to seek permission from the Minister for a deviation from the Integrated Resource Plan (IRP).

Nersa confirmed with Engineering News Online that it did indeed receive a letter from the Minister of Energy on May 2. "It should be clarified that the Minister did not direct Nersa to license, but rather notified Nersa that he has approved deviation from the IRP (2010-2030) in accordance with section 10(2)(g) of the Electricity Regulation Act of 2006."

The regulator said it would follow its normal legal processes in evaluating all applications received in order to comply with Promotion of Administrative Justice Act requirements, as well its primary legislation and regulations. "Therefore, public participation and consultation will be part of the process that Nersa is required by law to adhere to."

Nevertheless, the letter is expected to unblock hundreds of projects left in limbo since the end of 2017, owing to an absence of a policy framework for projects larger than 1 MW, even when those power plants were for own use.

The South African Independent Power Producer Association (SAIPPA) has estimated that between 2 500 MW to 3 500 MW of SSEG capacity has been constrained by the regulatory problem.

Projects below 1 MW are currently exempt from having a licence, but plants larger than 100 kW must be registered under a Nersa process that has itself resulted in significant uncertainty.

The regulator recently released a consultation paper for an updated Licensing Exemption and Registration Notice, submitted to it late last year by Radebe for concurrence.

The notice seeks to replace the November 2017 Licensing Exemption and Registration Notice, which is widely accepted to be “flawed”. Stakeholders have until May 24 to comment on the draft amendment to the Electricity Regulation Act.

The same November 2017 notice stipulated that plants above 1 MW not only be licensed, but that Nersa could consider granting a licence only in those instances where the Energy Minister had given explicit permission for a deviation from the IRP, which fails to cater for SSEGs.

At one point, it appeared that the logjam would only be cleared with the promulgation of an updated IRP – a draft IRP currently serving before the National Economic Development and Labour Council provides for a yearly SSEG allocation of 500 MW.

Following a reoccurrence of load-shedding during the first quarter of 2019, however, various stakeholders appealed to Radebe to intervene to address the regulatory impediments to SSEG plants, viewed as the quickest and cheapest way for South Africa to address its current electricity supply deficit.

Department of Energy deputy director for policy and planning Ompi Aphane tells Engineering News Online that the Minister has responded by using his powers, under Section 10.2 (g) of the Electricity Regulation Act, to enable Nersa to consider licence applications in the absence of a specific deviation order.

Aphane stresses that the intervention does not amount to a Ministerial determination, which is typically used in a context where Eskom is the single buyer of power arising from a private power plant. In this case, the power is likely to be consumed by a mine, a farm, a factory, or a shopping mall.

“The private sector can now go ahead and invest capital in generation assets that would increase energy security for their businesses, as well as for South Africa at large.

“This will impact the country’s balance sheet positively, as Eskom would not need to build new capacity, or sign new power purchase agreements with sovereign guarantees, and it would lead to Eskom burning less diesel to keep the lights on,” Garner told Engineering News Online.

He added that the SSEG sector had proven its ability to rapidly add generation capacity to the grid, while also upskilling local companies and creating jobs.

Likewise, the South African Wind Energy Association (SAWEA) commended Radebe for his intervention, saying it will contribute to further decentralisation and democratisation of the South African electricity sector. It will open the market to smaller-scale renewable energy projects with a significant level of local ownership.

“The SSEG market has the potential to support the industrialisation efforts stimulated by the Renewable Energy Independent Power Producer Procurement Programme and contribute to job creation,” SAWEA board member Ntombifuthi Ntuli, who is also Research Group Leader: Energy Industry at the CSIR Energy Centre, said.

The study also estimated the job creation potential for wind energy SSEG projects at 207 jobs during one year of construction and 127 permanent jobs during operations, for wind projects with a combined capacity of 50 MW.

Likewise, Garner added that a “secondary effect” would be more investment in the economy, which would help stimulate the local manufacture of inputs used by SSEG plants.

“This could be the trigger that business is waiting for to start reinvesting and re-industrialising the South African economy.”