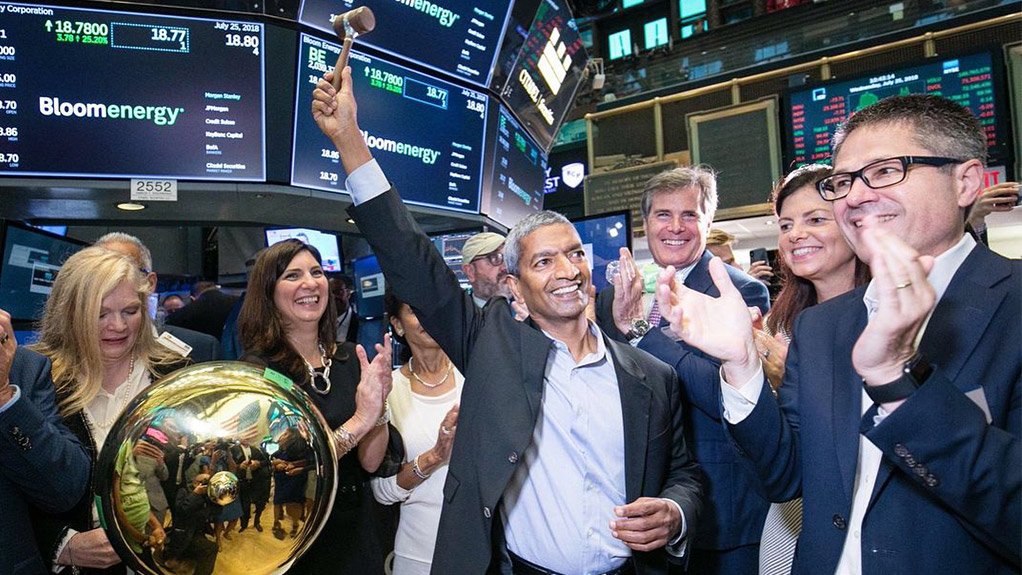 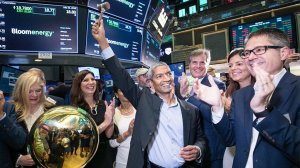 JOHANNESBURG (miningweekly.com) – Last month’s initial public offering (IPO) on the New York Stock Exchange of Bloom Energy suggests a second, much larger market may be emerging for fuel cells, Greentech Media reported this week in an article recording the deployment of Bloom’s technology at 25 Fortune 100 companies.

The enlarging market for platinum-using hydrogen fuel cells, which convert chemical energy into electricity ultra cleanly and very quietly, is being accompanied by the devices increasing their electrical efficiency, extending their life cycles and lowering their price tags.

Headed by CEO and founder KR Sridhar and bolstered by the presence on the board of former US Secretary of State and retired four-star Army General Colin Powell, the newly listed Bloom Energy is predicting positive cash-flow generation this year, after achieving a 60% post-IPO share price surge.

America’s Fuel Cell & Hydrogen Energy Association, which has the platinum-producing Anglo American as one of its leading sponsors, reported earlier this month that New York now has a second fuel cell production facility. The association added in a communique that 223 new hydrogen fuel cell vehicles had been sold by Hyundai in the three months to June 30, and a second-generation fuel cell truck was being tested by Toyota.

Boosting demand are strategic partnerships between manufacturers and companies as prominent as Coca-Cola and Walmart, which are using fuel cells for internal energy consumption.

The global fuel cell market size is projected to reach $24.81-billion by 2025 at a compound average growth rate of 20.9% over the forecast period, according to a report by Grand View Research.

International pressure on energy diversification is advocating a positive investment environment for alternative energy, Report Buyer stated last month, when it added that the fuel cell was on its way to becoming the most efficient form of alternative energy generation.

While platinum demand is crucial for the sustaining of employment in South Africa’s PGM mining sector, the potential for PGM-linked job creation in local manufacturing is also presented through the potential local development of hydrogen infrastructure, fuel cells, energy storage, water purification, sensors and durable electronics.

By the PIC and Amplats each committing R1.3-billion to the first venture capital fund of its kind specialising in pioneering technologies and businesses that make use of PGMs, both have become cornerstone investors in AP Ventures, which is led by a specialist global investment team that previously formed part of Amplats’ earlier investment in PGMs opportunities.

“This investment will stimulate and sustain the demand for PGMs in the long term, benefitting our clients and preserving the long-term mineral wealth for all South Africans,” said PIC CEO Dr Daniel Matjila of the initiative.

Altergy Systems, a company supported by the first of these two funds, last month announced a fuel cell solution for a nature preserve in Wisconsin, US, where a 30 kW fuel cell is working in tandem with 200 kW of solar power.

The use of fuel cells continues to spread in many parts of the world, which is exemplified by Doosan beginning construction of the world’s largest hydrogen fuel cell power station in South Korea, an agreement being reached for Zhejiang Runfeng Hydrogen Engine Company to manufacture and assemble fuel cell engines for use in Chinese fuel cell vehicles, and Walmart last week opening an import distribution centre in Alabama that is supported 100% by fuel cell forklifts.

Fuel cell garbage trucks are being developed for the South Korean government by Hyundai and a fifth retail hydrogen fuelling station has been opened in the German state of Hesse by Air Liquide and Shell. Linde is constructing a facility for a German bus company in North Rhine-Westphalia that will supply hydrogen to vehicles far more quickly and the South Korean government has committed itself to assisting with the deployment of 1 000 fuel cell buses by 2020.

As a producer of fuel cell systems that generate electricity without particulate emission, Bloom Energy has reportedly driven down its costs by 75% since 2009 and increased the rate at which hydrogen is converted into electricity by 45%.

Report Buyer stated last month that the rise in fuel cell shipments over the past three years had compelled manufacturers to expand operations. Fuel cell units shipped at a global level in 2016 were estimated to be 78 000, with the US market size estimated to be 8 205 units.

The proton exchange membrane fuel cell, which is dominating the fuel cell market, accounted for 76% of US units shipped in 2016.

Fuel cells have been used since the early days of the space programme, but limited applications, high costs and a long history of overpromising and underdelivering have provided plenty of ammunition for an army of sceptics, SunEdison co-founder and Generate Capital partner Jigar Shah pointed out in this week’s article in Greentech Media.

“Maybe that’s finally changing,” stated Shah, who pointed out that Amazon’s purchase of $70-million worth of fuel cell forklifts from Plug Power last year hinted that a billion-dollar US market for fuel cell technology might be possible.

“Bloom’s recent successful IPO suggests a second, much larger market may be emerging. Many in the energy and environmental sector are sceptical that fuel cells are a viable tool for further decarbonisation. However, with electrical efficiency increasing dramatically, product lifetimes extending and costs decreasing rapidly, the technology deserves a second look,” he wrote.

“Bloom makes and installs all-electric fuel cell systems that can scale from 200 kilowatts up to tens of megawatts. Like all fuel cells, its ‘energy servers’ generate electricity without combustion, which eliminates NOx, SOx and particulate emissions. Bloom now claims the highest efficiency of any commercial fuel cell technology, and its servers don’t need any water to generate electricity,” Shah pointed out.

Bloom Energy has reached scale through the use of over $400-million of Californian incentives, with commercial adoption increasing after the company graduated from the state incentive programme.

According to Shah, the company’s beginning-of-life efficiency of 65% efficiency represents the highest delivered power efficiency of any commercially available power solution.

The power density of its newest systems is also said to represent a fivefold increase on the systems shipped at the beginning of this decade.

A large fuel cell deployment in New York City has taken half of a medical centre’s electricity load off the power grid and a microgrid is providing round-the-clock power to elementary school, library, senior centre, health centre, convenience store and gas station in Hartford, Connecticut.

The systems, which are being integrated with batteries and solar panels, can now also operate on on-site biogas, “providing a unique way to generate and integrate additional renewable resources”, noted Shah.

The company's American-invented and American-manufactured technology could, in Shah's view, provide solutions in countries like India, where grid power is extremely carbon-intensive and local air pollution presents a massive threat to human health and the environment. Bloom Energy benefits from a 30% federal investment tax credit that is also afforded to solar and geothermal technologies.

As electricity grids continue to decarbonise and modernise, more established technology deployment at scale will be needed, which will create more clean energy jobs and unlock more wealth creation to validate further fuel cell investment, is the Shah viewpoint.

“Many sceptics never thought we would include fuel cells in the discourse on decarbonising the energy sector, but companies like Plug Power, Bloom, Fuel Cell Energy and others are proving them wrong,” added Shah.

Steps to use and help produce fuel cells are also being taken in South Africa, where in 2014, Amplats and the Canada-based Ballard Power Systems launched the world’s first fuel cell minigrid electrification field trial to power homes in the Free State.

In 2016, Impala Platinum (Implats) unveiled a fuel cell forklift and hydrogen refuelling station at its refinery in Springs.

In 2017, Implats identified an original equipment manufacturer for the development of fuel cell driven load haul dumpers (LHD) and stated that 8 000 oz of platinum would be needed for every 1 000 fuel cell LHDs.

This year, Implats stated that it was involved in the creation of a special economic zone (SEZ) for fuel cell development under the auspices of the Gauteng Industrial Development Zone initiative.

Implats has invested R25-million in bus and LHD niche applications where the mobile space is best served by a minimum number of refuelling points, the lowest infrastructure hurdle.

It is also working with a partner on developing fuel-cell componentry that includes power modules, storage systems and that very heart of the fuel cell, the stack, to ensure that there is a local feed into the local manufacture of fuel cells in the proposed SEZ.