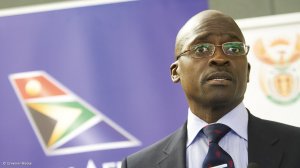 Following the launch of the pilot test of Transit Visa Biometrics System (TVBS) at the OR Tambo International Airport late last year, Home Affairs Minister Malusi Gigaba says the baseline implementation of the Phase 1 biometric solution will be completed by March 31 this year.

The system, together with the Biometric pilot project, is aimed at recording the movement of transit travellers on the department’s enhanced Movement Control System (eMCS) by capturing the biometrics for all travellers upon their arrival and departure from the country.

The Department of Home Affairs’ view, reiterated by Gigaba, is that “the successful implementation of the biometric solution at ports of entry will provide for a mechanism that mitigates against the requirements to uphold transit visas”.

Further, the TVBS will identify individuals and confirm identity of travellers with certainty, efficiency and security.

Gigaba explained that the system allowed for the biometric data (photo and fingerprints) of a traveller to be captured in addition to the normal scanning of the passport to record the movement on the eMCS. The first registration would require the department to capture all ten fingerprints, while subsequent movements would only capture one, for verification purposes.

He stressed that the ultimate aim is to capture biometrics for all travellers upon arrival and departure from the the country at all ports of entry.

Gigaba listed the benefits of biometrics, notably that it would help prevent the use of fraudulent documents, protect visitors by allowing authorities to identify theft and stop criminals and immigration violators from entering the country. Lastly, the system will also alleviate the pressure to apply, in person, in visa-required countries or in those countries where South Africa has no representation.

He then emphasised that South Africa is not the only country in the world asking people to apply for visas in person and using biometrics. Examples include the US, Canada, the Netherlands, New Zealand, Bulgaria, Saudi Arabia, Yemen, Singapore, Ghana, Tanzania and Kenya.

While he conceded that the scope of capturing biometrics at the four pilot sites is limited to selected passenger processing counters, he enthused that capacity should be extended within the first quarter of 2016.

Thereafter, a roll-out plan will be developed to implement the capturing of biometrics at the other 67 ports of entry.

“We are looking forward to a smooth process with only limited glitches as would be expected of any new endeavour or project. At these four pilot sites, there will be immigration officers who will assist travellers with the capturing of biometrics,” Gigaba asserted during the launch.