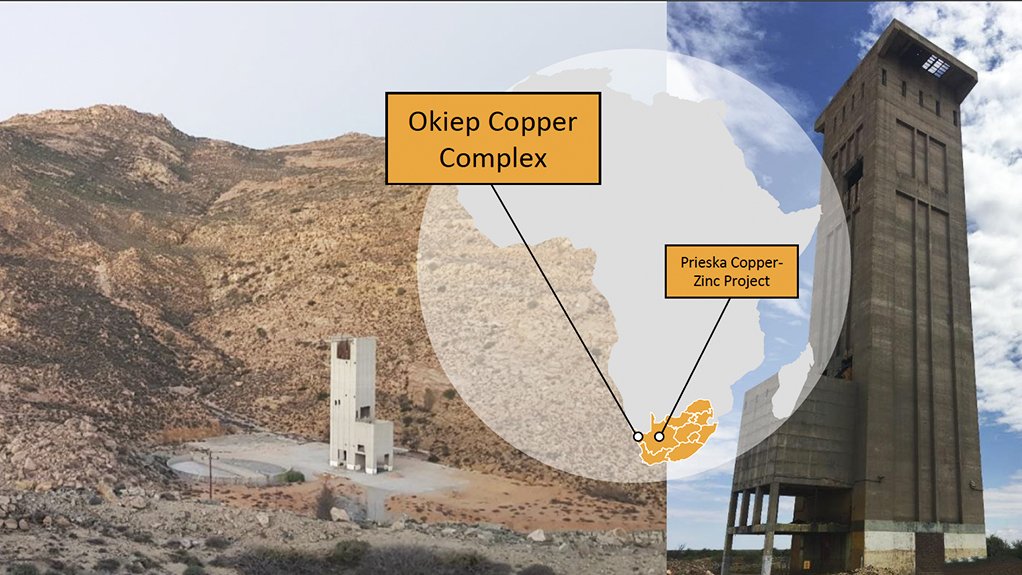 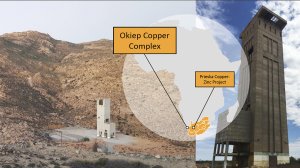 JOHANNESBURG (miningweekly.com) – The copper strength of Orion Minerals is intensifying with Tuesday’s announcement of the company’s exclusive option to acquire the Okiep Copper Complex in South Africa’s Northern Cape for A$7.5-million.

The Sydney- and Johannesburg-listed company, headed by Errol Smart, now has an opportunity to develop a second base metal production hub alongside its well-endowed first – the Prieska copper/zinc project, where it is intent on beneficiating copper in the province using renewable energy to produce green metal.

The combination of the Okiep Copper Complex and Prieska is seen by Orion Minerals as having the potential to transform it into a base metals powerhouse.

The Okiep Copper Complex has an historical production of more than two-million tons of copper and it is seen as having outstanding exploration upside, particularly with the use of new technology.

In a presentation to investors and media, Smart drew attention to its similarity to Orion’s well-infrastructured and data-rich Prieska project, 450 km east of it. The area is also close to Vedanta’s mines, mining services and contractors, as well as serviced mining towns.

The Okiep Copper Complex’s mineral interests are held by three entities Orion has an option agreement to acquire. These are 56.25% of South African Tantalum Mining (SAFTA). The remaining 43.75% is held by South Africa’s State-owned Industrial Development Corporation (IDC), which remains an active supporter and SAFTA financier. Orion and the IDC would cooperate to ensure compliance with the Mining Charter. The other two entities, of which 100% is targeted in each case, are Nababeeb Copper (NCC) and Bulletrap Copper (BCC).

Within 12 months of closing the proposed transaction, Orion is committed to spending a minimum of R4-million on exploration in each of the SAFTA, NCC and BCC areas.

These entities hold the majority of the large historical mines within the Okiep Copper Complex, for which there is technical data for 26 000 surface and underground drill holes and 150 000 technical reports, as well as several drilled orebodies with decline mine access and services are already in place.

All this is seen as potentially opening the way for production to commence in the next 18 months to 24 months, to supplement Prieska’s production and expand Orion’s base metals mining operations in the Northern Cape.

Ownership changes from Newmont to Gold Fields and Metorex, extending from the 1960s to 2019, have coincided with the ups and downs of the copper price cycles.

SAFTA has applied for a mining right on Metorex’s last producing section, where production stopes at 150 m below surface remain open.

The transaction is seen by Orion as being a significant growth opportunity in a top-tier mining district, with a clear pathway to establishing the Northern Cape’s second base metals production hub.

“We’ve got the team, we've got the people lined up. It’s just that much easier to do it now,” said Smart of the prospect of developing the Okiep Copper Complex with the Prieska project,” was Smart’s comment to Mining Weekly.

“I think we’re in a long-term bull run for base metals in general, but for copper in particular. The whole renewable energy and electrification drive globally is going to be a game changer. For the next decade, we are going to see very high prices,” he said.

He added that funding for the Northern Cape projects by Orion were crystalising quite quickly.

“People are frustrated and we’re frustrated because it has taken longer than anybody would like. But it's a complex discussion and negotiation between all the parties because you’ve got to make sure that you’ve got the right group of financiers together, because otherwise your life just becomes hell afterwards.

“It’s easy to grab quick money but you’ll cry forever after. So, we’d rather bide our time and do it right. We’re getting very close to that and that’s why we’re comfortable to pull the trigger on this. We now know that Prieska is largely done and we can start turning our attention to the growth story.

On being committed to expending a minimum of R4-million a year on exploration in each of the areas, he said: “That’s a drop in the ocean for what should be spent on this property. If this was in Australia, they’d be spending $20-million this year on projects like this. South Africa needs to get that kind of investment moving again, and then we’ll have Australia-sized mines being built. Until we mobilise the money, that’s not going to happen.

“The models are there. We just have to modify them a bit for our bespoke purposes. We mustn’t spend all our time trying to invent a wheel. It’s been done, people know it’s round and it’s got rubber on it, so let’s get on with it now.

“There’ll be a lot of news flow in the next couple of weeks. We’ll probably put the scoping study out this quarter still possibly and we think that we can see a lot more than can go into Jorc-compliance very quickly. That’s certainly the expectation. Anyone who hasn't been hiding under a rock forever will know that Peter Major has been walking around telling everybody there’s 29-million tons of resources that were in Gold Fields resources statements that were not mined by Metorex,” said Smart.

Major, of Mining of Mergence Corporate Solutions, is a veteran mining engineer, fund manager and analyst, who is highly regarded and well known in the mining and financial service industries. He frequently comments in the broadcast and print media as a mining investment authority.

“I think he may be right and I think apart from what was already Gold Fields’ resource inventory, there’s a helluva lot more to come. I don't think they’ve scratched the surface of this place,” he said.

Investors are seeing that Orion has managed to achieve what no other junior resource company has in South Africa, particularly in terms of base metals.

“The IDC and ourselves are very aligned in wanting to see beneficiation of copper in the Northern Cape using renewable energy to produce green metal. Those are our combined objectives and in this case we're moving closer to them and let’s hope we get them to the point where they become partners in Prieska shortly as well. If we do the same in Springbok as what we’re doing in Prieska, it’ll be good for South Africa,” Smart told Mining Weekly.