Green hydrogen to be produced from solar power at platinum mine

Green hydrogen to be produced from solar power at platinum mine 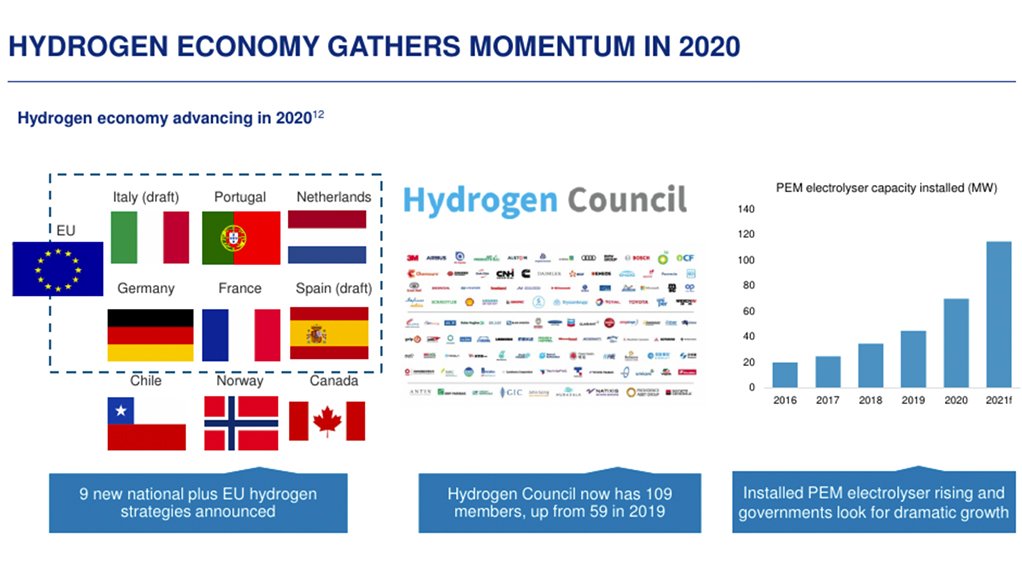 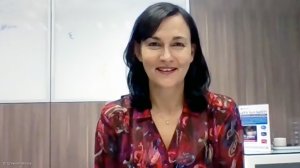 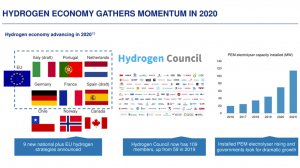 JOHANNESBURG (miningweekly.com) – Although platinum group metals (PGMs) mining and marketing company Anglo American Platinum will be starting with a 75 MW solar photovoltaic powered plant at its Mogalakwena mine, planned is an eventual 320 MW of solar power generation, the excess from which will be used to produce green hydrogen.

This was confirmed by Anglo American Platinum CEO Natascha Viljoen in a Zoom interview with Mining Weekly on Monday, following the company’s publication of record annual earnings, soaring cash and a 72% return on capital employed. The dividend declaration of R9.4-billion takes the total dividend payout for the year to R12.1-billion.

“That’s certainly work on the go,” said Viljoen of the hydrogen that will be used to power the 300 t PGM-catalysed hydrogen fuel cell truck that is under development. The company hopes to see it on the ground by the end of the year. (Also watch attached Creamer Media video.)

The initial 3.5 MW pilot plant will produce one tonne of green hydrogen a day to power the fuel cell truck.

“As you know, there is a bit of work that we need to do with Nersa and government to get approvals to get that done and also to get the right level of standards we will have to comply with to be able to put power back into the grid,” said Viljoen.

As reported by Mining Weekly last year, the electrolyser that will generate renewable hydrogen for the world’s largest hydrogen fuel cell electric vehicle project has been delivered to site by Nel Hydrogen Electrolyser AS as part of the joint partnership with Engie and Anglo American.

During the company's strategic update presentation, Anglo American Platinum executive head: corporate affairs Yvonne Mfolo displayed a slide stating that the proof-of-concept trial on the first hydrogen fuel cell truck is planned for the second half of this year, and that it will be followed by the rollout of about 40 trucks, to replace diesel consumption entirely at Mogalakwena.

Viljoen said the first step is to deploy green hydrogen for the large truck and then to learn from that deployment at Mogalakwena. She saw no reason why Mogalakwena should not consider using green hydrogen in its own processing facilities in the future.

Nel Hydrogen Electrolyser AS senior VP: business development David Bow emphasised to Mining Weekly the considerable elimination of carbon emissions that the use of green hydrogen is able to bring about.

In a Zoom interview in November, Bow said: “It’s important to understand that just one of these trucks, when diesel powered, consumes over 900 000 litres of diesel fuel a year, which equates to enormous amounts of carbon emission.

“If you look at the total installed base of 28 000 mining trucks around the world, the emission from those trucks is equivalent to the entire emissions from a country such as New Zealand or Finland.

“If you decarbonise those 28 000 trucks that are in the hands of openpit mining companies around the world, you are roughly removing an impact of 150-million cars off the roads,” Bow added.

In his outline of the markets, Anglo American Platinum FD Craig Miller described 2020 as a breakthrough year for the hydrogen economy.

“Corporates are also becoming increasingly involved. The Hydrogen Council now has 109 members, up from 59 in 2019, again showing that hydrogen is becoming a real commercial opportunity. It’s not just targets and talking,” said Miller, adding that installations of proton exchange membrane (PEM) electrolysers had soared. PEM electrolysers make use of platinum and iridium and hydrogen fuel cells are catalysed by platinum.

Viljoen drew attention to what she described as the increasing recognition of hydrogen’s role in decarbonising sectors that were otherwise difficult to abate, like heating and mobility.

“Hydrogen potentially offers one of the largest upsides for platinum demand in the coming decades. What is different now to the past is that there is a major directional shift towards hydrogen applications and we’re seeing positive signs towards the critical success factors to make this market a reality.

“It’s all in the story of the electron and the molecule. Hydrogen is primarily an opportunity to store renewable energy in molecules. This solves the significant challenge of the continuous supply of renewable energy. The conversion of electrons to molecules and then back to electrons has cost and efficiency impacts.

“Policy changes and the inclusion of hydrogen in both government and private sector decarbonisation strategies will ensure that the resources are being made available for the development of the technologies. Through 2020 into 2021, we have seen strong momentum in hydrogen-related investments. In the last year alone, over 200 hydrogen products were announced worldwide and government-funded pledges for the hydrogen economy more than tripled in 2021, reaching $70-billion, driven by the global shift into decarbonisation.

“We expect that these investments will continue to reduce the cost of hydrogen and make certain mobility applications increasingly competitive. For example, the Hydrogen Council estimates that 60% of applications become competitive at a cost of between $4 to $6 per kilogram. This is well over the $2 per kilogram that Bloomberg New Energy Finance believes can be achieved by 2030, showing how soon hydrogen and fuel cells can become a commercial reality.

“This momentum in the hydrogen economy has significant potential for PGMs. To put his into perspective, if just 50% of heavy-duty vehicles and 15% of light-duty vehicles were to shift to fuel cell power, this would translate into PGM demand of about six-million ounces, or 75% of global demand today,” Viljoen said, adding that hundreds of thousands of ounces of additional demand a year were also set to be generated by electrolysers by the mid-2030s.

“But we’re not waiting for this demand to materialise on its own. Through our unique approach to market development, we shape future PGM demand through nurturing, scaling and sustaining new and existing demand segments. Our approach covers the full business life cycle. At early stage, we assemble ecosystems by coordinating capital and talent around PGM-centric ideas.

"We support PGM businesses by providing growth capital, either directly or through AP Ventures. For relatively mature demand segments, we support by scaling and capturing the demand base. These activities are supported by two work streams shaping the business environment. The first is communication and the second is policy advocacy, to create a positive playing field for the growth of opportunity areas,” Viljoen said.