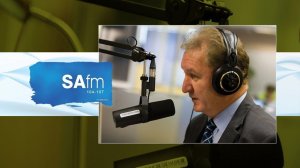 Creamer: We’ve got to throw or mind back to Thulani Gcabashe. He used to run Eskom. He was the CEO of Eskom during the Presidency of Thabo Mbeki. When he left Eskom, after a while he went into renewable energy, and now he’s taken one massive step bigger, and he’s got international partners. What he’s going to do is put up this massive new green ammonia plant in Nelson Mandela Bay, and he’s doing it under Hive Hydrogen. There is a UK company Hive and he’s linked up with Afrox and the German Linde, and they are going to, in 2025, come forward with green ammonia, using solar power from the Eastern Cape, and combining it with the port activities there, which are seen as ideal, and then get this out in ships, which themselves will probably at that stage be using green ammonia, because this is what the world needs now. They can’t have all the emissions  from the ships in the maritime situation. They’ve got to move over to a new climate-friendly era and this is what Thulani Gcabasche is bringing over with this $4-billion plan, we’re talking there, that’s more than R60-billion for Eastern Cape.

Creamer: The environment is top of people’s minds now and you can see that those who are in green metals, like platinum group metals, they don't want to have a situation where the market  says, yes, you’ve got a green metal but you produce it in a dirty manner. You burn coal to produce that. So they are moving away, and this is Sedibelo, and it’s out at North West, and the Industrial Development Corporation’s got a very interesting shareholding in there, and they have been helping them to develop a new process called Kell. This Kell process uses a fraction of the electricity that the normal platinum group metals’ companies need for smelting because, instead of smelting, they have a hydrometallurgical approach that only needs a fifth of the electricity, and now they're saying that fifth is going to be solar and there will also be hydrogen. So, they want 100% greenness. And they say that the terminology ESG, which is environment social and governance, always used to be in their annual report but probably on page 40, but now it’s all page one stuff, everybody wants to have a totally green footprint, and that’s what’s coming up in North West province.

Creamer: This is a remarkable initiative by Eskom, which has got no less than 36 000 ha of unused land in Mpumalanga, a lot of it around eMalahleni, the old Witbank, and what they are going to do now is auction that off to people who come forward with plans to build renewable energy, sun power, wind power, using that land. They will win the bids for size and speed. If they say we’re going to do this very quickly and we’re going to give you just under 100 MW, which doesn’t require licensing any more, that will bring them to the top of the queue. This has got a lot of praise now from the mining industry. Of course, the mining industry is always wanting a good flow of electricity. Mining itself is prepared to put in 4 000 MW of renewable energy into the system. At the same time, Eskom is doing things that will allow you to get on to the national electricity grid far easier and what they call wheeling tariffs are being sorted out by Eskom, which should make the flow of electricity in South Africa a much better process as we enter 2022 and beyond.

Kamwendo: Thanks very much. Martin Creamer is publishing editor of Engineering News & Mining Weekly. Martin Creamer will be taking his usual seasonal break and he’ll be back with another Update from the Coalface, with renewed vigour, on Friday, the 14th of January, next year, 2022.