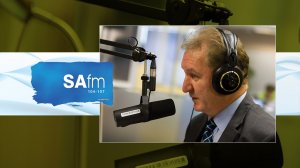 Kamwendo: Platinum fuel cell cars are beginning to roll off the Mercedes and Toyota production lines.

Creamer: The more the merrier. We see Toyota just came through with Mirai and coming through soon will be Mercedes with a fuel cell vehicle. We must not be upset about the fact that Mercedes has managed to use less platinum, in fact, they have cut the platinum use in the fuel cell down to what they use for an autocatalyst.

This is a very important breakthrough. We have been trying to see how little platinum we can use there in order to this an economic proposition. The Germans have managed to do that. They are looking at this hydrogen age very firmly. With this fantastic vehicle, they are bringing out you get the range of a normal vehicle.

You get the filling up at the filling station of a normal vehicle. It is like everything that we are used to they are preserving, except that you are doing it in an environmentally friendly way, you are not polluting the cities anymore. The only emission is water. But, you do have to have the hydrogen infrastructure built up and that is why this German car is very interesting, because it has got a mixture of the fuel cell and the plug-in battery.

So, you have got a battery type and the fuel cell, which takes you 500 km, but because of the fact that they are still building up the hydrogen infrastructure where you go and fill up with hydrogen, they have put the plug-in type of battery in your vehicle that will give you 50 km to get to wherever you have to do get to your hydrogen.

The big thing with this is that it is for bigger vehicles. They are talking about the smaller vehicles being their electric vehicles like the Tesla, not with a big range and you probably fill it up overnight, because you will plug it in at home. Whereas we want to try and travel in the way we used to and that is what the fuel cell gives, but you have got to roll out these hydrogen filling stations.

In Hamburg, Germany at the moment, you can not put up another filling station unless you have got a hydrogen pump, it is already obligatory. Germany by 2022 they are looking at 500 of these hydrogen stations, California will have 400 soon. Japan has already got 80 of them, so it is happening.

The big thing is, of course, to clean the air. We see the city mayors around the world led by the three times mayor of New York Michael Bloomberg saying that we have got to clean up our act, because this kills people. The unhealthy air we have damages peoples health. They have even got the mayor of Cape Town involved.

Globally people are moving into cities so that is where the big action is, that is where they have to do these things. Hopefully they will have rolled out a lot more of the vehicles. We know at Davos they said hydrogen age must come. They see this as the cleanest way to do it and it is great for us, because the platinum will be used. You have just announced platinum price at $902. That is very low.

You can see that demand is just not coming through for this metal that is from Southern Africa. It helps build us and at the moment not doing well at all.

Kamwendo: I wonder if anyone is driving one of these cars at the moment?

Creamer:  At the moment it is restricted to Germany, California and Japan, because of the hydrogen infrastructure that is needed.

Kamwendo: So, in South Africa, how long before we can?

Creamer: I think that we should start moving on it. Surely it is in our interests to move on this, because we are the suppliers of the platinum.

Kamwendo: South African manganese is on the list of hitech metals that could stop world progress if it runs into short supply.

I am so pleased that among the technical metals they listed, and they have been doing a global study, manganese. They say, where does this come from? South Africa. We need this, because we don't often think of it, that with the battery electric vehicle there is a manganese content in that lithium-ion battery.

We just think of lithium-ion and we don’t think of manganese. They do in America and they are saying hang on guys we are worried about these metals. We are great with our technology, but we haven’t got these technical metals and minerals here. They are starting to look as to where these come from. So, the University of Delaware did a big study, they were speaking to the people in South Africa, Australia and all over the world. They are saying that there is a lot of uncertainty in this, we never know whether we are up or down.

There is no exploration going on, we have got all sorts of treaties for climate change, but we have got no treaty when it comes to these metals, which could stop our progress in the world. Why don’t we sign a treaty? That is what they are trying to push now, so that they will know where these things can come from. They are looking at the cobalt price, which has rocketed by 76%, this was one of the metals on the list.

They are saying if they get these sort of sharp price rises it is going to affect them very badly, so what can they do to try and mitigate this. Of course, on the cobalt side, we should be doing something, because when we produce our platinum and process our platinum, because we use such high temperatures we destroy that cobalt. We have got a new system to avoid that, so hopefully they will use that and we can also be a supplier of cobalt.

Kamwendo: But why are we not recognising the potential? Why are we not playing hardball to say, we have got the minerals you need, so why can’t this happen simultaneously in German and in South Africa? It is a win-win situation.

Creamer: Particularly we need this economic growth and work together. The more collaboration now the better. You can see that people want the collaboration, because they are worried that these metals and minerals might not be there when they need them.

They have showed a lot of confidence early, R2.8-billion that they are investing in expanding their capacity. Not only at Alrode in Alberton, but also at Rosslyn near Pretoria. This is over and above the R1-billion that they are going to do in public interest investment. This floats a lot of boats, because it also pushes the agricultural side and they are looking at growing more barley and even potentially South Africa exporting barley.

When we hear that we see growth in the economy and it is always great to see. This is a very big group, they are really now the global beer producers. There is no one that is so global and they are seeing South Africa and Africa as very important. Beer consumption, as you say, continues no matter what the state of the economy. It is good that they are putting their money where their mouth is.