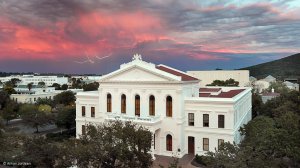 University of the Western Cape Professor and South African National Bioinformatics Institute director Alan Christoffels received the Hamilton Naki Award, in recognition of an individual’s outstanding efforts to advance his/her career in science against all odds, and for achieving world-class research performance, despite considerable challenges.

Speaking at the event, Science and Technology Minister Naledi Pandor highlighted that South Africa’s progress towards a knowledge-intensive economy rested on its ability, as a country, to develop a diverse cohort of young researchers with high-end skills.

“The fact that today, only four black and five female researchers out of 28 researchers are to receive their A-rating is an indication of the long road still ahead. It is, therefore, awardees of today and their colleagues who bear the responsibility of ensuring that not only is South Africa globally competitive but also that there is a new generation of researchers that is ready to take up the reins and ensure that South Africa remains competitive well into the future,” she said.

NRF acting CEO Dr Beverley Damonse added that progress had been made by the organisation in building human and institutional capacity, particularly with regard to achieving equity and transformation within South Africa’s research sector.

“The progress we are making bodes well for our efforts to strengthen South Africa’s global competitiveness in the knowledge creation and innovation arena,” she added.

Dr Nuraan Davids from SU’s Department of Education Policy Studies and Dr Ntobeko Ntusi from the UCT Department of Medicine walked away with the Research Excellence Award for Early Career/Emerging Researchers, which recognises Thuthuka grant holders for exceptional research performance.

The award for Excellence in Science Engagement, which honours individuals in the research community at South African higher education institutions and science councils for making outstanding contributions to public engagement with science over a sustained period, was given to University of the Witwatersrand School of Animal, Plant and Environmental Science Professor Marcus Byrne.

The aim of the award was to encourage academics, while working in their fields, to also contribute substantially and be committed to enhancing the public’s awareness and engagement with science, technology and innovation.

The Excelleration Award for South African Research Institutions went to the Central University of Technology and the University of Limpopo.

The P-Rating, which is normally assigned to researchers under 35 years of age who have held a doctorate award or equivalent qualification for less than five years at the time of application, was received by SU Centre for Studies in Complexity Dr Reinette Biggs.

P-rated researchers are considered likely to become a future international leader in their respective field, on the basis of exceptional potential demonstrated in research performance and output during doctoral and/or early post-doctoral careers.