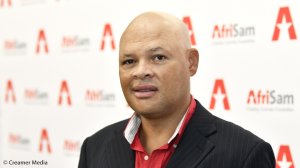 AfriSam sales and marketing executive Richard Tomes speaks to Engineering News about the 2020 Budget and how it could influence the future of the country's infrastructure and construction sectors, and the businesses - like AfriSam - that operate within this space. Video: Creamer Media's Kutlwano Matlala. Editing: Creamer Media's Nicholas Boyd.
BY: Simone Liedtke
Writer

Growth in this sector was expected to remain relatively flat, he said, adding that the infrastructure and construction sectors were not regressing, as “massive urbanisation” was still happening, meaning that schools, clinics, houses and the like still needed to be built for South Africa’s population, which was growing at 1.5%.

However, Tomes indicated that the challenges that South Africa was facing, including financial risks, uncertainty, low economic growth and rising debt levels, “are no different” to the ones experienced prior to the country’s galvanisation in 1994, when crime and uncertainty about the future were also rife.

Taking this into consideration, he noted that “one of the big challenges” for businesses was reaching out to government to “show some confidence” in the country’s future.

According to Tomes, the private sector has about R800-billion that it could invest.

He implored the private sector to invest this money into the construction and infrastructure sectors, adding that if business confidence grew, and policy uncertainty was dealt with, it had the potential to undo some of the damage done to South Africa.

Within a South African context, Tomes told Engineering News that challenges, such as the uncertainty around the future of e-tolls, where a verdict is yet to be announced, and even the energy supply challenges, could provide an opportunity to transform a risk into a reward.

The recent announcement by government that businesses would now be able to generate their own electricity was a positive development.

“That will boost the economy, because one of the things that is holding back the economy at the moment is . . . the lack of energy,” said Tomes.

In the interim, with irregular or no spending, water shortages and service delivery protests becoming the new norm in South Africa, Tomes suggested that businesses, like AfriSam, need to ensure efficiency and cost management in current operations so that “when the upturn comes”, the construction and infrastructure industries were able to continue providing quality services and products that were needed.

“There may be a bit of pain in the short term, but it will turn around. It can’t carry on at this level.”

In this respect, AfriSam has internal developmental programmes where aspiring artisans are developed and trained. Once equipped with the right knowledge and skills, these artisans have the ability to find employment opportunities, and these may not always be within AfriSam, Tomes said.

He added that, as part of its social and labour plans, AfriSam has also embarked on a journey of engagement with communities who are in need of various infrastructures, such as schools, classrooms or clinics.

Big projects, like the recently announced harbour project in KwaZulu-Natal, were still needed, he acknowledged, adding that, with a turnaround, the South African National Roads Agency’s work on major highways and routes could “start to boost the economy again”.