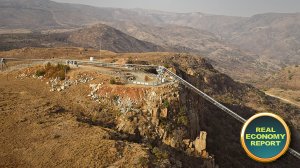 Platinum group metals miner Northam is expanding its ore handling systems to cater for increased volumes coming from its north, central and currently-under-construction south mines, at its Booysendal complex.

To ensure it can efficiently handle any further increases in mining output, the Booysendal mine is progressing with expanding its aerial conveyor system, the RopeCon, to transfer ore between its various mine shafts and its two concentrator plants.