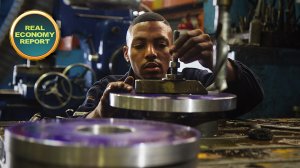 Sashnee Moodley:
Danish valves manufacturer AVK Valves Southern Africa has officially launched its R200-million valves manufacturing facility in Alrode, Gauteng, with the manufacturer being the first in its sector to take full advantage of the Department of Trade and Industry’s local content requirements for State-owned entities. Anine Kilian tells us more.

Anine Kilian:
These requirements stipulate that, following a particular product’s designation under local procurement regulations, such entities must, when procuring the item, ensure it is a locally manufactured, 75%-local-content product.

The factory is dedicated to manufacturing AVK products that previously had to be imported from Denmark and other countries.
AVK’s new plant comprises a 1 200 m2 training facility, a 2 500 m2 office area and a 2 000 m2 logistics and warehouse space.
Speaking to Engineering News Danish ambassador to South Africa Rask Thygesen said she was impressed with the plant.

Anine Kilian:
The new facility has enabled AVK to achieve the scale and capacity to not only meet South African requirements, but also to expand in the sub-Saharan market.
AVK Southern Africa emerged from Premier Valves Group in 2014, when the Danish valve manufacturer acquired a majority stake in Premier.
Since the acquisition, AVK Southern Africa Holdings has created 150 indirect jobs and 114 permanent jobs, 84 of which employ artisans across the company’s value chain.

Ground was broken earlier this month at the R9-billion, 100 MW Kathu Solar Park concentrated solar power project, in the Northern Cape, which is set to be one of the largest projects of its kind in the country.
Kathu Solar Park partners Sener regional MD Siyabonga Mbanjwa

Women entrepreneurs must use their environment and the immediate challenges facing their communities as drivers of business.
Gauteng Enterprise Propeller CEO Leah Manenzhe