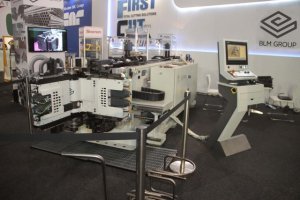 First Cut Tube division sales manager Neil Labuschagne explains that the E-TURN32 tube-bending machine, which is available in four models, is suited to any application in the general manufacturing industry, particularly in the automotive, furniture and aeronautical/aerospace industries.

The machine provides significant flexibility, as it can bend in 15 axes movements, roll and punch different sizes of tube up to 50.8 mm in diameter, and in any material, such as ferrous, nonferrous and speciality metals, except plastic, he says.

With the need for speed and efficiency from automated production becoming increasingly crucial to determine and ensure project profitability, the E-TURN32 fulfils this need, as it is a fully electric, computer numerically controlled machine, with all axes using Siemens drive technology and servomotors, Labuschagne points out.

“The latest trends in tube-bending technology see a move away from the slow movement of hydraulic machines to the faster-moving servomotor-operated machines,” Labuschagne asserts.

With parts-per-hour being produced at faster rates, thereby exponentially increasing productivity, and with repeatability ensured, the operator achieves lower costs per bend, resulting in improved profitability.

Operators can, however, still maintain absolute consistency and quality of the products at the highest level, Labuschagne states.

Added to the machine’s intelligent machining characteristics is its interoperability and remote diagnostic capability.

The machine can also be adapted to include robotic arms for the loading and offloading of parts; and can be connected to or integrated with other machines in various cells.

In line with the drive to achieve ‘Industry 4.0’ within the tube-bending industry, the machine uses Virtual Graphic Programming three-dimensional software to check feasibility, as well as eliminate the risk of collisions, which may occur during the first practical try-outs, Labuschagne stresses.

The machine also uses B Toolssoftware to guarantee perfect results, regardless of the level of operator skill, Labuschagne reiterates.

While the machine is inexpensive to run and maintain, its reduced power consumption also offers power savings of up to 80%, compared with conventional hydraulic machines.

Labuschagne believes that it is a suitable time to introduce the latest version of the E-TURN32 on the market, owing to the increased production of the new models in the automotive industry, as well as the launch of several contracts by the Passenger Rail Agency of South Africa, which may see increased demand for the machine.

Additionally, there are several requests for quotes on the machine, as customers specify the machine to suppliers, Labuschagne says.

Indicating the success of the machine, Labuschagne notes that seven previous versions of the E-TURN32 machine have been installed across South Africa in the past seven to eight years, with 60% of the machines installed in the automotive sector, 20% in the furniture sector and 20% in the aeronautical sector.

BLM and First Cut imported two machines, selling one to an aerospace customer. The second, on display at Machine Tools Africa 2017, has subsequently been sold, Labuschagne concludes.