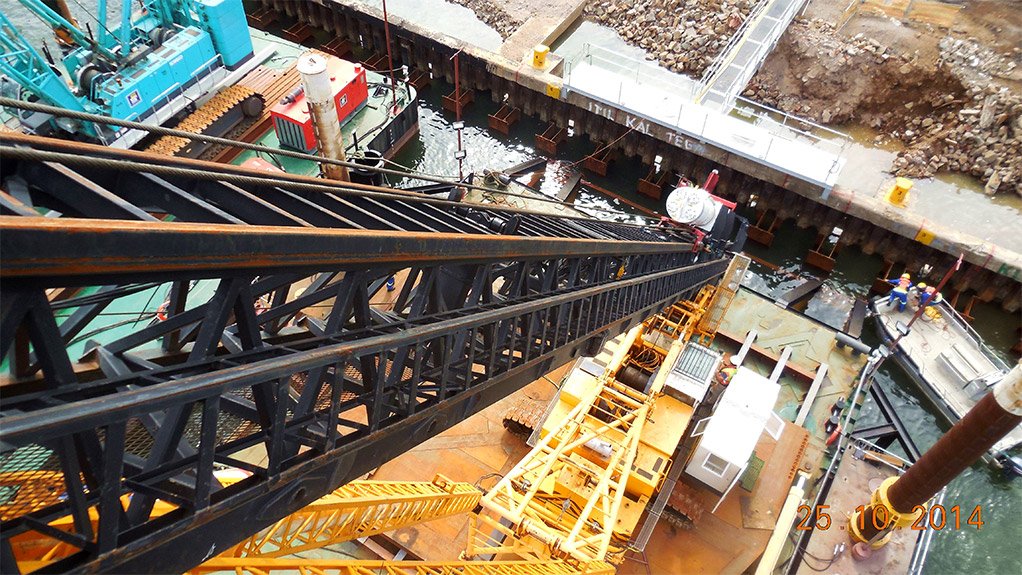 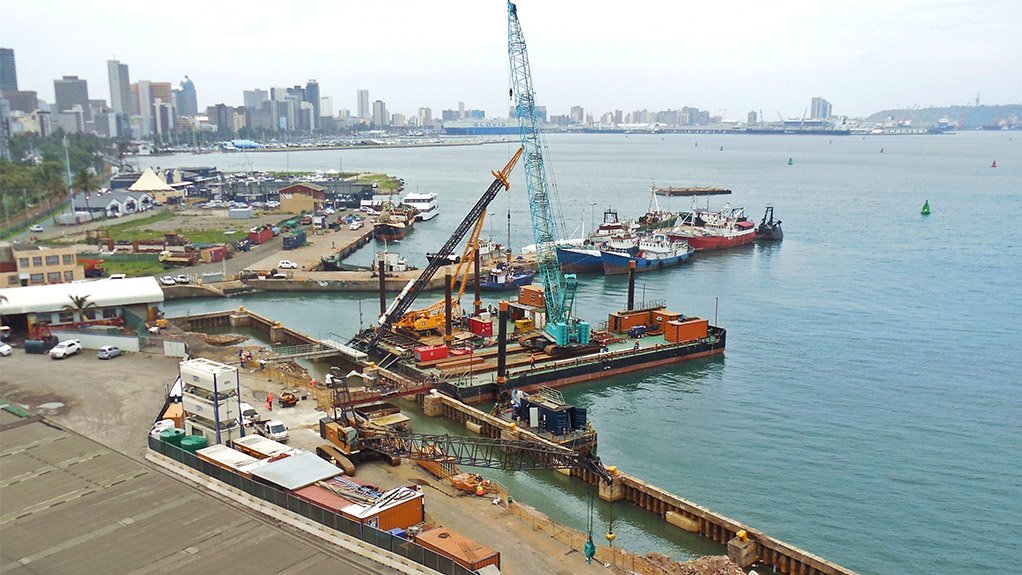 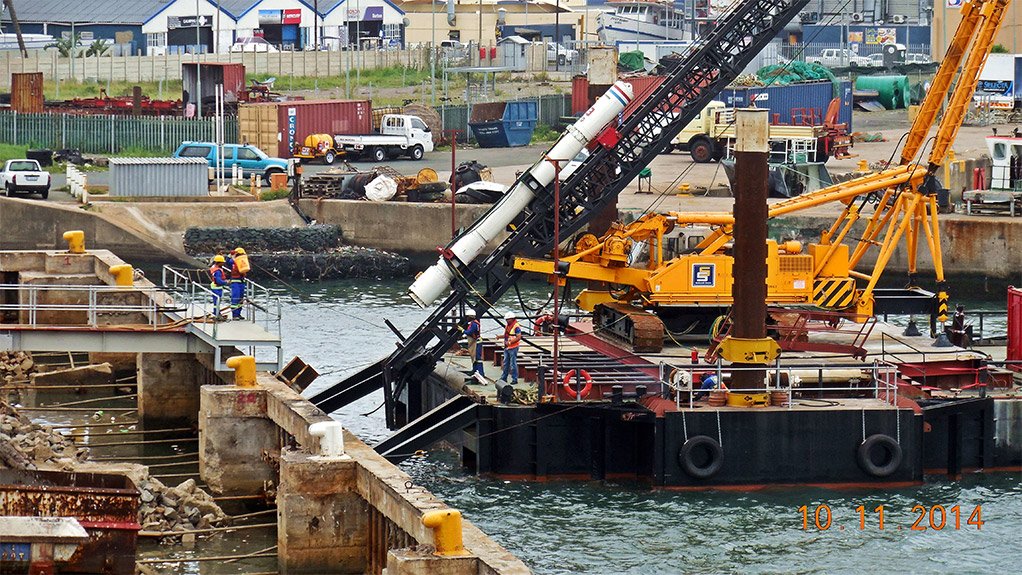 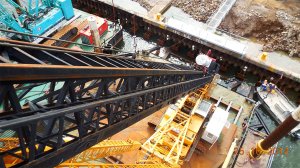 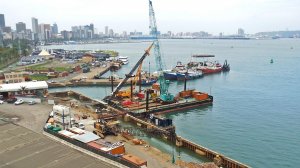 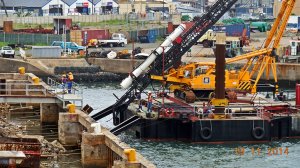 PROJECT APPROACH Sucessfully upgrading the berth will require using a phased approach with limited construction access minimising disruption to the available quay space at the Port of Durban, which is already under capacity
MAYDON WHARF The SSAXSYS JV will replace the existing sheet pile quay walls at Maydon Wharf, while also upgrading the berths to accommodate larger ships
PORT STAKEHOLDERS PRIORITISED It is important that activities which cause significant disruption to stakeholders are planned well in advance and are closely managed

SSAXSYS JV, a joint venture (JV) between construction group Stefanutti Stocks and enterprise development partner AXSYS Infrastructure has set the completion date for construction at Maydon Wharf, in Durban, South Africa, for December 2016. The project contract was signed on April 7, 2014, with construction starting on site in May 2014.

The project aims to achieve the objectives of replacing the existing sheet pile quay walls at Maydon Wharf (berths 1 to 4, 13 and 14) that are at risk of collapsing and at the same time upgrading the berths to accommodate more modern, larger ships.

“Part of upgrading the berth entails dredging the seabed in front of the new quay walls down to –16 m below mean sea level, and then placing scour rock in front of the new quay wall to end up with a final finished depth of –14.5 m below Chart Datum level. The scour rock is a critical element in the new construction, as, without it, ship propellers would scour the seabed and create holes that would compromise the structural integrity of the new walls,” states Stefanutti Stocks contracts director Andrew Pirrie.

Owing to the risk of the existing quay wall failing during construction, the construction sequence requires the demolition and removal of material directly behind the quay wall to reduce the active pressures exerted on the structure and prevent failure of the system.

“[Most] of the critical marine works is being carried out using in-house equipment such as barges, crawler cranes and piling hammers, which enable us to have much more control over the work and, subsequently, be more flexible and adaptable when dealing with new challenges as they arise,” states Pirrie.

Using in-house equipment allows for resources to be easily diverted to deal with the most critical requirements, which has greatly helped to minimise programme delays, he says.

“We have been encountering lots of problems dealing with the unforeseen underwater conditions – for example, obstructions below the seabed and projections from the existing wall – we recently found a lump of concrete projecting from an existing wall as a result of an old repair. It is something you do not come across until you start piling . . . then you have to stop working on the area and try to resolve the problem. Establishing the nature and extent of the problem underwater is not always simple, and the existing quay walls require sensitive treatment to avoid the risk of collapse. Therefore, being able to relocate equipment and project focus is a necessary requirement,” explains Pirrie.

Sucessfully upgrading the berth will require using a phased approach, with limited construction access minimising disruption to the available quay space at the Port of Durban, which is already below capacity.

Pirrie states: “A big focus for the on-site project team is to minimise disruption to the port, the port users and the stakeholders. These stakeholders enjoy priority – everything we do will affect other users in some way. A lot of effort is put in to ensure that activities which cause significant disruption to stakeholders are planned well in advance and are closely managed.

“This further adds to the complexities of managing our own operations, such as at the interfaces between our construction area and working berths, and also the logistical challenges of moving steel piles up to 33 m long around the port,” he says.

Further, Pirrie notes that the piling works, particularly the grouted inclined anchor piling – a first for South Africa – is a significant challenge, as it has taken an intensive effort to get the right equipment, mostly imported from Europe, with some local adaptations, in place.

During the final phases of assembling the piling equipment and commissioning the piling barge, as well as during the start-up of piling operations, piling experts from various European suppliers were at the site to commission the barge. A piling expert from design engineer Dutch Foundation Systems was on site for three to four months to assist in the transfer of piling skills.

“Stefanutti Stocks has a great team of piling specialists, but this piling technology is completely new to South Africa and has never before been implemented. In Europe, this piling technique executed on land is relatively common, particularly in the Netherlands, but, in our case, we are working from a barge on water, not on land. Because Maydon Wharf is an existing quayside, we cannot stop all the shipping coming through the channel to create a backfilled berm to work off, so we have to work from a floating barge which definitely adds an additional dimension to the challenge,” says Pirrie.

Pirrie emphasises that “the important aspect . . . is that the skills transfer has been successful”, with the European experts also having left the site. This is significant, he says, as Stefanutti Stocks originally expected to have overseas experts on site for the duration of the anchor piling activities, adding that this is “proof that skills and technology transfer can be successfully implemented”.

He says the advantage for the client is that this piling technology significantly minimises the disruption to back-of-quay port operations, as a significantly smaller construction area is required, compared with using the traditional methods when anchoring steel sheet-piled quay walls.