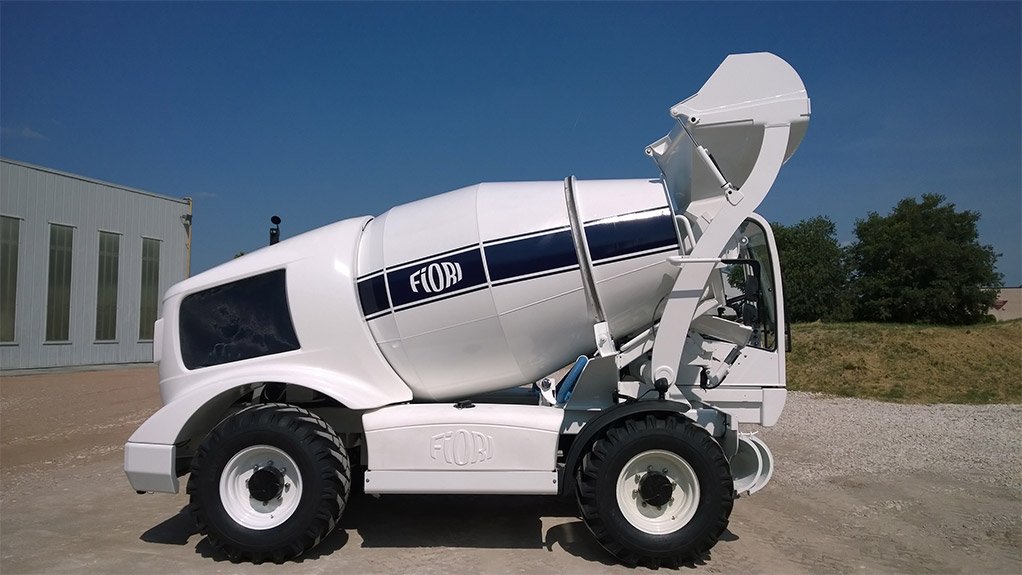 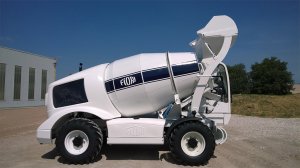 This Italian-designed and -manufactured self-loading mixer is the smallest entry-level front self-loading machine in the Fiori range of such mixers, which PMSA will distribute.

PMSA marketing manager Quintin Booysen says the first two units arrived in South Africa in January, following the international launch in mid-2014. He tells Engineering News that both units were sold within one month of arrival and were well received by the clients.

“The DB X35 mixer offers more accurate volumetric loading and shortened loading times, owing to the front loading bucket positioning and inclination of the drum,” he says, noting that the mixer offers transport savings, as a result of its compact design.

With transport costs predicted to increase in future, Booysen highlights that two Fiori DB X35 mixers can fit into one standard 12 m open-top shipping container, which halves transport costs, compared with other Fiori machines and competitor machines of the same capacity.

The unit also enables users to make concrete on demand, which is particularly useful in rural locations. Booysen notes that users can also use local materials, such as stones and aggregates found on site, to create their own cement mixes.

“This mixer is an alternative solution for new concrete- or construction-market entrants, as well as for existing clients, as it makes it possible to acquire a machine that costs less than R900 000, with full service, training, service kit, a spare wheel and repair support.”

He explains that, while nonessential items, such as the pivoting seat and rotating mixing drum, have been removed to reduce costs, the wide cabin windscreen and the specially designed loading arms significantly improve visibility when casting the concrete mix. Other features of the Fiori mixer include the hydraulic drive system and 4 × 4 capability, as well as crab and skid steering.

“The mixer also includes a special double- truncated cone-shaped drum with a convex bottom and dual-screw, or double helix, mixing system that allows for increased efficiency through better material homogenisation, as well as reduced mixing times.”

The DB X35 mixer is also equipped with a standard digital electronic litre counter designed to activate and control the introduction of water into the drum directly from the cabin.

Meanwhile, the rear-steering differential swing axle, together with the tyres and the high-pressure automotive hydrostatic transmission, facilitates driving and machine control on any terrain.

The fixed loader also has an automatic unloading hatch, which facilitates and enhances material loading while preventing losses when introducing the materials into the drum. The 680-ℓ-capacity Standard grab bucket ensures high productivity and significant accuracy during sand and aggregate dosing; it also facilitates concrete loading from the upper hatch. Booysen further highlights that, combined with enhanced handling and stability features, the mixer enables a maximum performance of 3.5 m³ of concrete per batch. Realistic outputs at the average site could include a peak performance of up to 100 m3 in a nine-hour day, he adds.

“We are able to produce quality concrete, as well as save the customer up to 40% on capital costs, without compromising machine and concrete quality,” he emphasises.

While completing the mixer’s design, PMSA and Fiori, in a joint venture, also accounted for the scarcity of skills in Africa by removing parts that are not essential to the operations and that will not influence the end-product. Therefore, the machine is more user-friendly, as well as faster and easier to maintain in remote locations.

However, the reliability of the machinery also remains paramount, together with support services and spare parts availability, notwithstanding the increasing demand for backup units or units that could be let while the primary equipment is serviced or repaired, Booysen points out.

“As PMSA aims to educate customers to produce quality concrete on demand, the company carries up to ten machines across its range in stock, as well as spare parts to the value of several million rands at all times, with in-house service technicians specialising in the various product ranges,” he concludes.