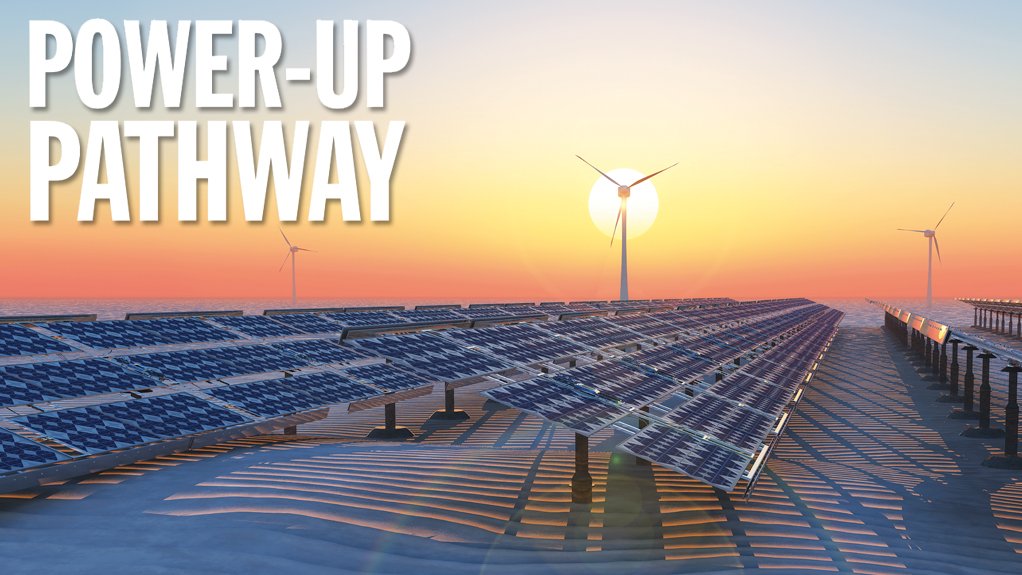 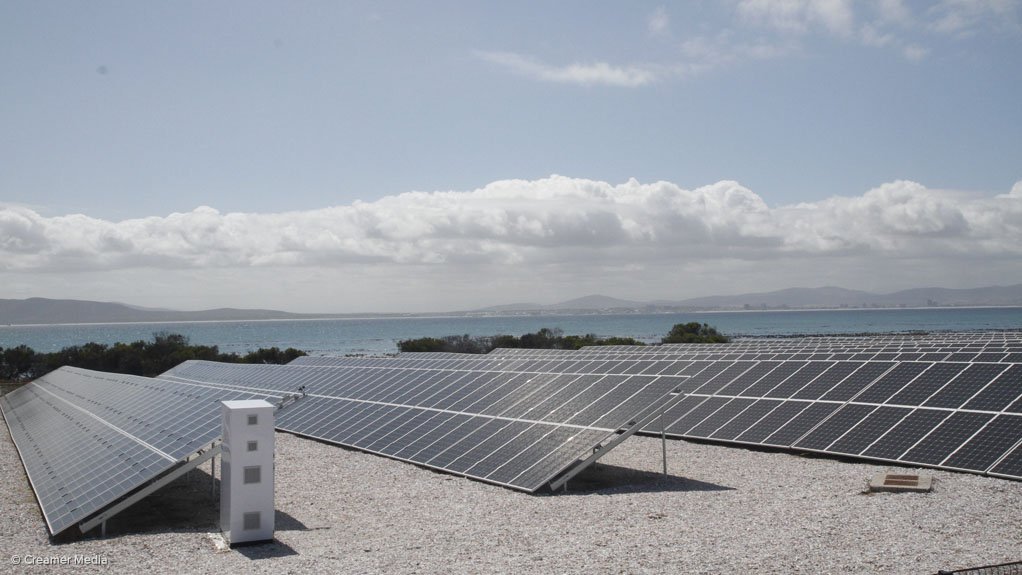 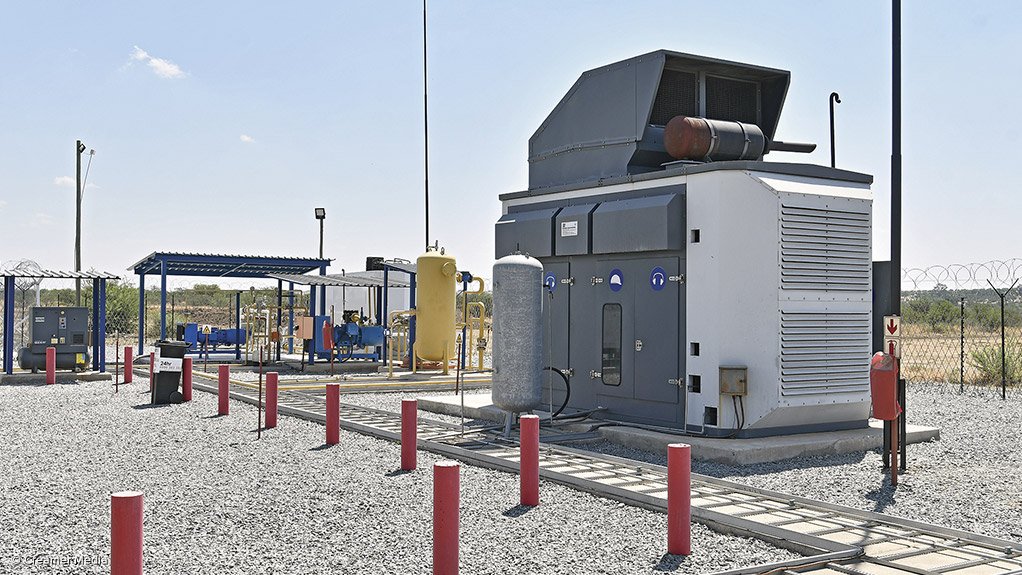 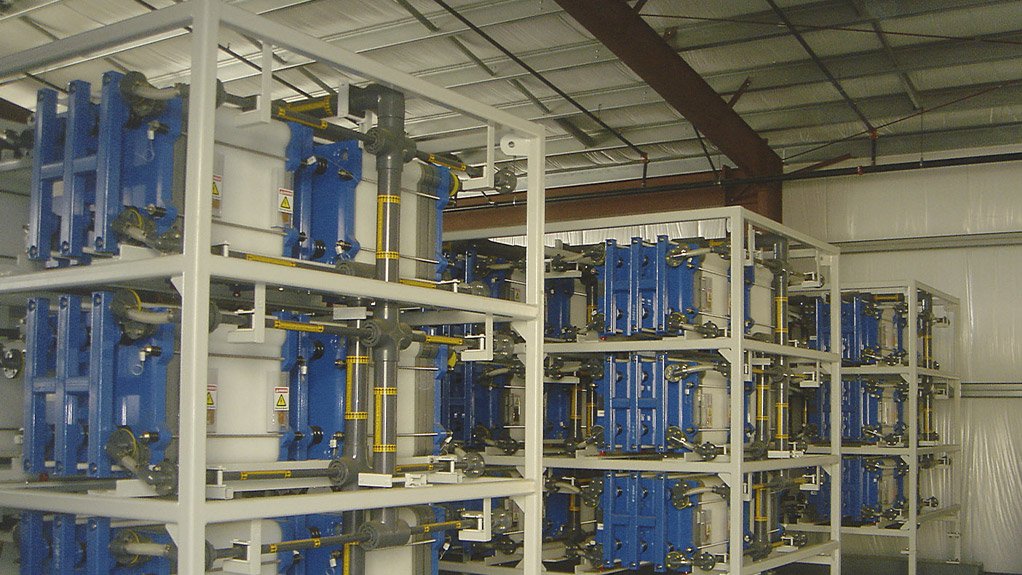 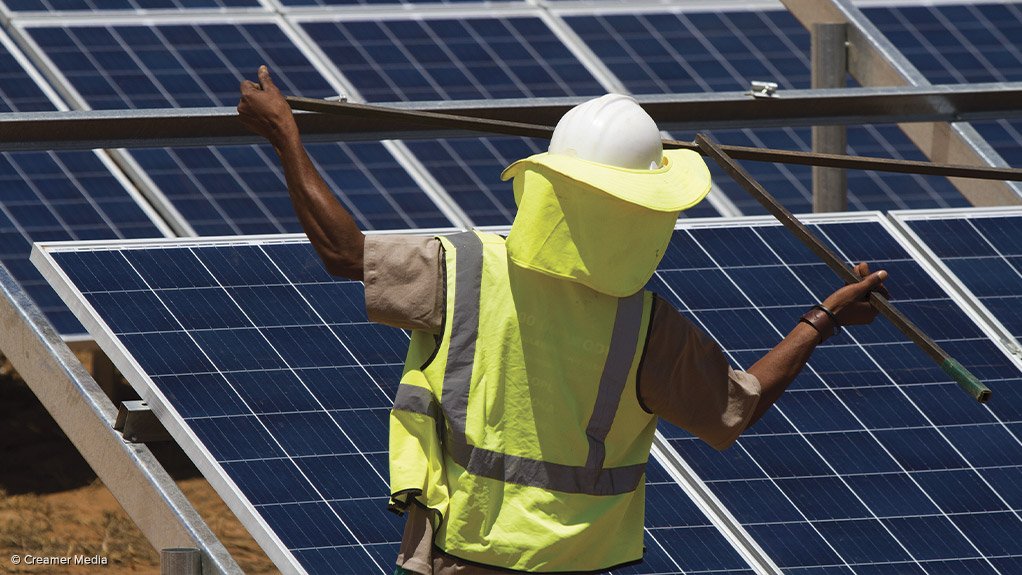 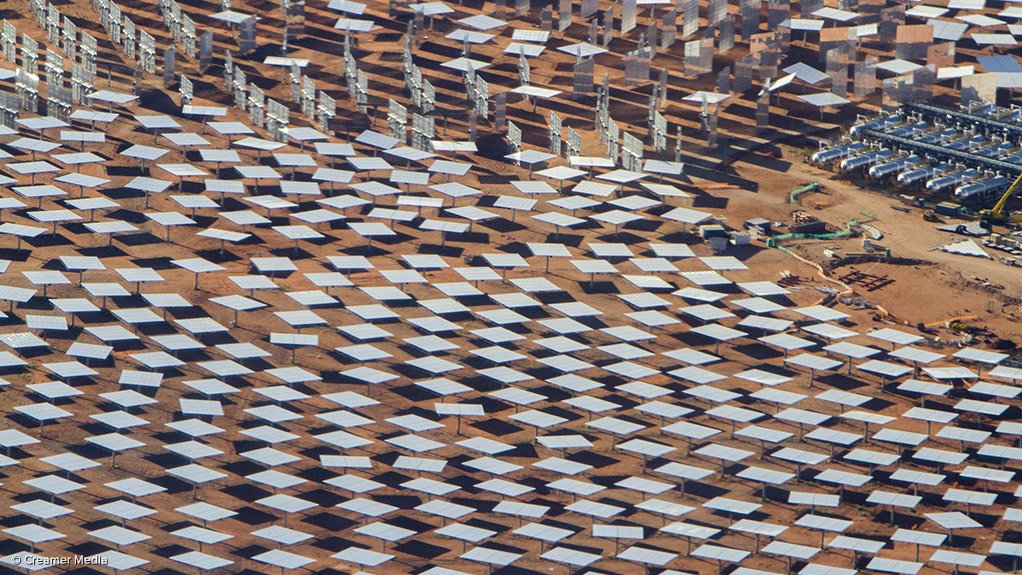 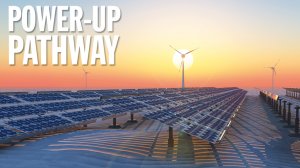 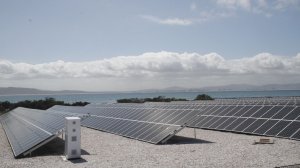 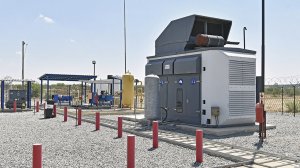 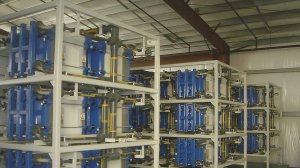 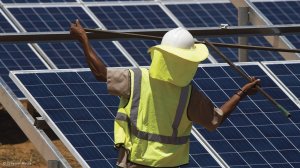 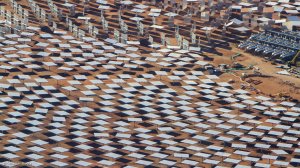 PV MICROGRID Local-level investments with new business models to support distributed generation and energy on demand are needed
Photo by Donna Slater
NATURAL GAS Natural gas can support industrial growth, and could be used in applications that are difficult to electrify
ENERGY STORAGE Batteries and energy storage systems can support standalone systems and microgrids by reducing the impact of variability
DEVELOPMENT RESOURCE Given supporting policies, solar PV can become one of the continent’s top energy sources and supports an increase in electricity use in residential, service and industrial applications
SUSTAINABLE DEVELOPMENT To achieve low-carbon growth, large-scale renewable energy must form a significant share of the generation mix

Africa can meet its major sustainable energy and development goals without becoming more energy intensive, as it has a unique opportunity to use renewable energy, natural gas and energy efficiency to meet its development needs and provide reliable and modern energy services.

This is the prediction of the International Energy Agency (IEA), stated in its ‘Africa Energy Outlook’ report, released in November, based on the African Case scenario, which is predicated on the measures and supporting policies required to achieve the Africa Agenda 2063. The other scenario, the Stated Policies scenario, includes current and announced energy policies in Africa.

Profound demographic changes in Africa – the urban population is set to grow by more than half a billion by 2040 – are set to drive economic growth, infrastructure development and, in turn, energy demand.

“Africa’s energy prospects depend on the way government policies shape investment flows, and the availability and affordability of modern energy sources.”

To lift constraints and achieve Agenda 2063, full access to modern energy should be targeted by 2030, which, in the case of electricity, would require tripling the average number of people gaining access each year to more than 60-million, the IEA report explains.

“Grid expansion and densification is the least-cost option for nearly 45% of cases, mini grids for 30% and standalone systems for around a quarter.”

The IEA warns that the energy transitions bring mixed implications for Africa. While it has abundant natural resources and the associated revenues could be an important motor for development, development models in Africa that are highly dependent on hydrocarbon revenues are coming under increasing pressure.

Energy infrastructure planning and development are key differentiating factors in determining the reach, scale and affordability of decarbonisation, as well as the balance between winners and losers to ensure just social outcomes as the energy transition progresses, global energy organisation the World Energy Council (WEC) states in its ‘World Energy Scenarios 2019: Exploring Innovation Pathways to 2040’ report.

Further, supplying future electricity demand will require an increase in power generation capacity. Wind and solar will capture the bulk of this growth and gas will account for about one-third, while up to one-third of coal capacity will be retired.

“Massive yearly investments will be needed in power generation. To enable such investments, supporting policies must be developed and implemented, sometimes against the grain of established market structures. Owing to the size of the challenge, infrastructure is rapidly emerging as a new frontier of innovation,” the WEC notes.

Simultaneously, investments at the ultra- local level will have to occur with new business models to allow for distributed generation and energy access on demand anywhere, anytime and for anyone, the council states in the report.

The development and reliability of Africa’s electricity sector will be determined by progress in improving power infrastructure within and across borders. To support the tripling of electricity demand requires building a reliable power system and a greater focus on transmission and distribution assets, says the IEA.

Africa needs significantly more electricity- sector investment in generation and grids. Despite being home to 17% of the world’s population, Africa currently accounts for only 4% of global power supply investment. Achieving reliable electricity supply would require an almost fourfold increase to about $120-billion a year to 2040, notes Birol.

“About half of that amount would be needed for networks. It can be achieved if policy and regulatory measures improve the financial and operational efficiency of utilities, as well as facilitate the effective use of public funds to catalyse private capital.”

Developing the technical and regulatory capacity to support sector reform policies, including in Africa’s financial sector, is critical to ensure a sustained flow of long-term financing to energy projects, Birol says.

Regional grid interconnection will enable countries to share other renewable resources, such as hydro, for balancing the variability of wind and solar generation. Solar and wind generation may reduce the risk of the interannual and climate-driven variation of hydropower resource availability, the International Renewable Energy Agency (Irena) says in its ‘Renewable Energy Zones for the Africa Clean Energy Corridor’ report.

“Although abundant wind, solar photovoltaic (PV) and concentrated solar power resources exist in the Eastern and Southern Africa power pools, the uneven geographic distribution of high-quality resources demonstrates that regional collaboration and grid interconnect will be necessary to promote the supply of low-cost, clean wind and solar energy to all countries.”

To meet the forecast energy-demand growth through a low-carbon pathway, large-scale renewable energy must form a significant share of the overall generation mix, Irena says.

“Many of the renewable-energy zones are close to existing transmission infrastructure and major load centres, thus lowering transmission extension and upgrade costs, as well as transmission-associated land use.”

Many wind zones throughout renewable energy zones are also suitable for the development of solar PV, which suggests that co-location could be an important siting strategy to maximise transmission capacity use, minimise land use and increase return on investment.

However, because high-quality, abundant resources also exist in areas that are relatively ecologically intact, developing these zones must be actively avoided through pre-emptive land use and electricity policies that promote low-impact development.

Irena, which mapped and modelled renewable-energy corridors in Africa, says almost all countries with sufficient renewable-energy potential can develop zones that are cost effective and have low environmental impact.

“Identifying renewable-energy resource areas with high-quality potential and a low environmental and social impact can allow for the rapid, yet appropriate, deployment of renewable power generation plants and the expansion of transmission systems,” it highlights.

Agricultural dual land-use strategies could help to spur wind development while supporting farmers, according to the Irena report.

Electricity demand in Africa is currently 700 TWh and is expected to more than double to over 1 600 TWh under the current policy trajectory, reaching a predicted 2 300 TWh in a supportive policy environment, as electricity supports an increasing range of residential, service and industrial uses.

Most of this additional electricity demand stems from productive uses and middle- and higher-income households.

“A key question is how fast solar will grow. Africa has the richest solar resources in the world, but has installed only 5 GW of solar PV, which is less than 1% of the global installed capacity,” the IEA adds.

Solar PV can surpass hydropower and natural gas to become the largest electricity source in Africa in terms of installed capacity, and the second-largest in terms of generation output, with the deployment of almost 15 GW a year across the entire region possible between now and 2040.

With the right policies, solar could become one of the continent’s top energy sources. Further, although the size of the continent’s economy in 2040 would be four times larger than it is currently in the Africa Case scenario, efficiency improvements help limit the rise in total primary energy demand to only 50%, the IEA states.

The global energy transitions open new opportunities for different strategic resources in Africa because major mineral reserves, such as cobalt and platinum, are crucial for clean energy technologies. Owing to natural resource endowments and technology improvements, Africa can pursue a much less carbon-intensive development model than pursued in many other parts of the world, the IEA highlights.

Rising demand for key minerals that can support global energy transitions offers opportunities for minerals-rich countries in Africa, but responsible stewardship of these resources is vital.

“Sub-Saharan Africa is home to more than 40% of global gas discoveries so far this decade. These developments could fit well with Africa’s push for industrial growth and its need for reliable electricity supply,” the IEA highlights.

Successful industrialisation rests upon the stable provision of energy, including energy for applications that are difficult to electrify. Gas could be well suited to these roles. Much will depend on the price, the development of distribution networks, financing for infrastructure and the strength of policies to displace polluting fuels.

Renewables, together with natural gas in many areas, are poised to lead Africa’s energy consumption growth as the continent moves away from the traditional use of biomass that currently accounts for almost half of final energy consumption.

However, energy infrastructure spending trends have been declining. Energy supply investments in sub-Saharan Africa have dropped by more than 30% since 2011, and oil and gas investments have more than halved because of low oil prices and investor concerns about regulation and security in major producing countries, the IEA warns.

“The levels of spending still fall significantly short of what would be needed in the Stated Policies scenario, particularly in the power sector.”

Stable and effective governance and regulatory frameworks are crucial for increasing competition and attracting investments in the energy sector, Birol concludes.