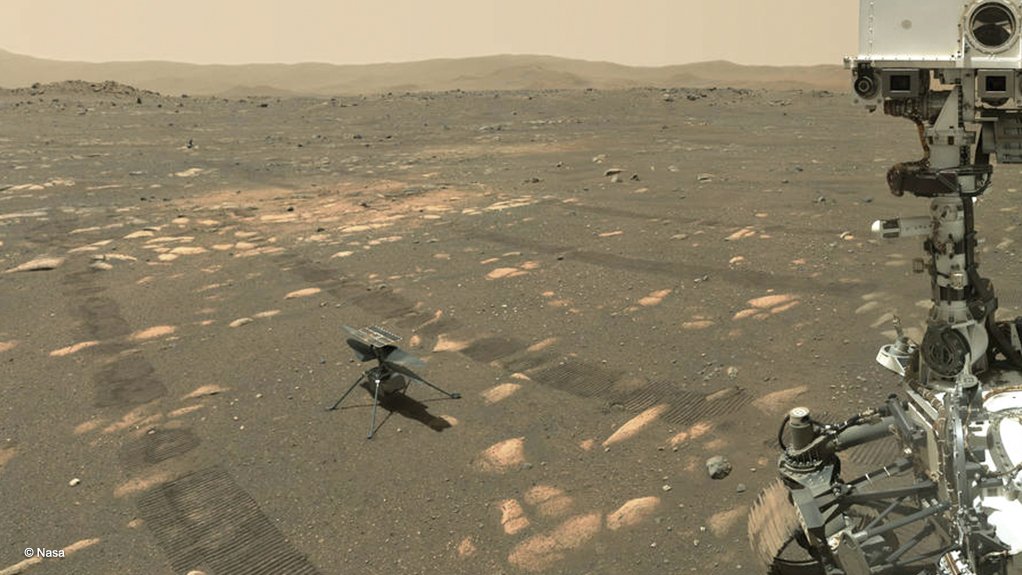 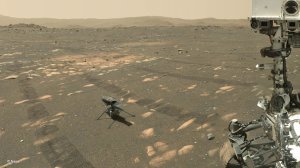 Photo by Nasa
The Ingenuity drone helicopter (centre-left) sitting on the Martian surface, photographed by the Perseverance rover (part of which is visible on the right)

The US National Aeronautics and Space Administration (Nasa) has announced that its Ingenuity Mars drone helicopter has proven so successful that it has been assigned a new mission. Originally intended to be purely a technology demonstrator, to establish that powered and controlled flight was possible in the very thin atmosphere of the Red Planet, the small uncrewed aerial vehicle will now be used to evaluate how aerial reconnaissance and other activities could assist future exploration missions on Mars and other worlds.

“The Ingenuity technology demonstration has been a resounding success,” highlighted Nasa associate administrator for the Science Mission Directorate Thomas Zurbuchen. “Since Ingenuity remains in excellent health, we plan to use it to benefit future aerial platforms while prioritising and moving forward with the Perseverance rover team’s near-term science goals.”

On its first three flights, the drone achieved or exceeded all of its technology demonstration targets. “From millions of miles away, Ingenuity checked all the technical boxes we had at Nasa about the possibility of powered, controlled flight at [sic] the Red Planet,” affirmed Nasa Planetary Science Division director Lori Glaze. “Future Mars exploration missions can now confidently consider the added capability an aerial exploration may bring to a science mission.”

The helicopter was designed and developed by Nasa’s famed Jet Propulsion Laboratory (JPL). The JPL is also responsible for operating it and for managing the Mars helicopter project. Because of the communications time lag between Earth and Mars, the aircraft operates autonomously.

Ingenuity is now in a transition phase between its technology demonstration mission and its new operations demonstration mission. This phase will involve two flights of which the first – the drone’s fourth flight overall – took place on Friday. This saw the little helicopter fly some 133 m south of the Perseverance rover (which carried the drone to Mars and acts as its communication base station) to photograph a potential new landing zone (LZ), before flying back to its current LZ, known as Wright Brothers’ Field, from which it has made all its flights so far. This flight saw Ingenuity exceed the range, speed and duration it achieved on its third flight. Should the imaged site prove suitable as a LZ, then on its fifth flight the drone will fly to it and land there.

Assuming that the helicopter is still in good shape, the new, operations demonstration, mission will then follow, starting with its sixth flight. This new mission has been so designed that it will not interfere with the planned exploration programme for Perseverance. Ingenuity will be used to make aerial observations of the rover’s science targets, scout out possible routes for Perseverance to take, and image otherwise inaccessible features. Equipped to take monochrome stereo photographs, the helicopter will provide such images to allow Nasa researchers to create three-dimensional digital elevation maps.

“We have so appreciated the support provided by the Perseverance rover team during our technology demonstration phase,” said Nasa JPL Ingenuity project manager MiMi Aung. “Now we have a chance to pay it forward, demonstrating for future robotic and even crewed missions the benefits of having a partner nearby that can provide a different perspective – one from the sky. We are going to take the opportunity and run with it – and fly with it.”

During this new phase, however, the frequency of Ingenuity’s flights will decrease significantly, from one every few days to one every two or three weeks. These flights will also have to be scheduled on days and times that would not interfere with Perseverance’s science activities. These flights will also be used to expand the helicopter’s flight envelope, taking greater risks in the process. The Ingenuity team will evaluate its flight operations after 30 Martian days (effectively the same as 30 Earth days). All flight operations will be terminated by the end of August, at the latest.