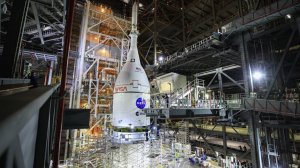 Senior officials of the US space agency, the National Aeronautics and Space Administration (Nasa), confirmed on Friday that the first flight in its new crewed space programme, Artemis, will now take place early next year. Although there had been a growing conviction among space journalists and analysts that Artemis I would not be launched before the end of this year, Nasa had not previously publicly stated that that would indeed be the case.

The Orion spacecraft (composed of the Orion capsule and the European Service Module, the latter supplied by the European Space Agency) was mounted on its Space Launch System (SLS) launch rocket last week. This means that the complete rocket/spaceship combination is now fully assembled. While Artemis I will be an uncrewed test flight, the Artemis programme is intended to again land men, and now also women, on the Moon and carry out deeper space missions.

“Completing stacking is a really important milestone,” highlighted Nasa Artemis I mission manager Mike Sarafin. “It shows that we’re in the home stretch towards the mission.”

The first launch window for Artemis I will run from February 12 to February 27. The second launch window will be from March 12 to March 27, and the third, from April 8 to April 23. “We’re looking for a period of time within February,” affirmed Nasa deputy associate administrator: exploration systems development Tom Whitmeyer. “We’re very excited. We think this is really tremendous progress.”

Before it can be launched, Artemis I needs to go through a number of essential tests. The  stacking of the SLS and then of Orion on top of the rocket was carried out in the Vehicle Assembly Building (VAB) at the Kennedy Space Centre. The complete system must now undergo a series of tests within the VAB. Late this year Artemis I will be rolled out to Launch Complex 39B, for more tests. The most important of these is the ‘wet dress rehearsal’, which should take place in January. This involves fuelling the SLS and going through an almost complete practice countdown, which will end only just before the SLS’ four RS-25 engines would be ignited. Then the complete SLS/Orion system will be returned to the VAB for its last preparations, before being returned to the Launch Complex for actual launch.

The actual launch date will only be set after the completion of the wet dress rehearsal. “We really want to see the results of that test, see how we’re doing, see if there’s anything we need to do before we get ready to launch,” explained Whitmeyer. Should the first launch attempt have to be scrubbed, a second launch attempt would be possible after an unavoidable 48-hour ‘turnaround’. Should the second attempt also be scrubbed, a third would be possible, but this time the gap between launch attempts would be 72 hours.