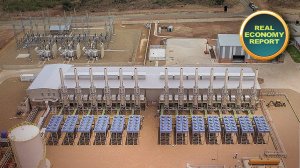 Anine Killian:
The project, which took 18 months to complete, was developed by South African investment group and majority shareholder in the project Gigajoule International.

CEO Johan de Vos told Engineering News Online that the plant had an installed capacity of about 120 MW. The plant’s 13 generators of 9.3 MW each were manufactured by multinational corporation ABB and powered by Rolls-Royce engines.

The electricity generated by the power station was supplied to power utility Electricidade de Moçambique under a long-term power purchase agreement, both for use within Mozambique, as well as for sale to the regional Southern African Power Pool network.

The capacity of this power station represents about 24% of the needs of southern Mozambique, excluding that of the MOZAL aluminium smelter. this was a noteworthy contribution to reducing the country’s energy deficit,” he said.

Matola Gas Company supplied the natural gas to power the Gigawatt Park plant from a pipeline that branched off the main pipeline from Pande, Mozambique, to South Africa. About $200-million was invested in developing the project.

The turnkey contract was implemented by a consortium comprising engineering firms WBHO and PB Power and solar thermal power company TSK as the main subcontractor.

Since there was insufficient gas available to sustain a long-term contract of this order of magnitude, Gigawatt subcontracted Aggreko to produce energy using power stations that can be dismantled to satisfy short-term commercial agreements of between two and four years.

Gigawatt remained committed to seeking better paths for expanding the capacity of the power station until it reached what was set out in its concession licence.