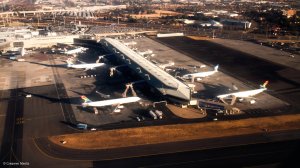 While more local airports will be allowed to operate for domestic flights from 1 July, all international passenger flights are prohibited except those flights authorised by Transport Minister Fikile Mbalula, and only for repatriation of South African citizens and medical evacuation.

Mbalula made this and other announcements related to the aviation industry during a virtual meeting on Monday.

Some regulations on domestic flights were eased, however, with certain conditions.

"It has been three weeks since the OR Tambo, King Shaka, Cape Town and Lanseria International airports have been opened for domestic passenger travel.

"Following the announcement of phase 1 domestic operations, the airports and airlines submitted their Standard Operating Procedures to the South African Civil Aviation Authority [SACAA] for approval and this was followed by compliance inspections conducted by the Regulator to all four airports. My team and I visited OR Tambo International Airport and Lanseria for a readiness walk-about and we were satisfied that the airports were ready for operation," the minister said.

Mbalula said general aviation is permitted for the following purposes: Approved regional repositioning flights for all South African and foreign registered aircraft into and from South Africa for return after maintenance and repair, to perform maintenance and repair or to continue with contractual work within South Africa or foreign countries within the region; exchanging of crew members operating in foreign countries as and when required; and transporting of aviation technicians, mechanics and engineers internationally for essential support and assistance to aircraft.

Proficiency flights will be allowed, provided that the flight is authorised by the SACAA and remains within the general flying area, airfield or airport boundaries.

Recreational aviation is also permitted for proficiency flights, provided that the flight is authorised by the SACAA and remains within the general flying area, airfield or airport boundaries.

"All these measures are in line with the gradual reopening of our economy, as we enter a new normal and journey together, towards a healthier, safer and more prosperous South Africa," Mbalula said.

"As more airports are opened, this will naturally increase the number of passengers at airports and therefore measures have been put in place to ensure that passengers are prepared for their experience at the airports to avoid congestion mainly at security checkpoints.  While this works perfectly at the airports currently, it will need to be managed properly as we open for more activity.

"Sanitisers are classified as dangerous goods and the SACAA has made provision for the carrying of such in limited quantities as a safety measure and in compliance with existing regulations."

Mbalula said for the efficient facilitation of passengers at airports, the operators have urged the flying community to arrive at least two hours early to allow for sufficient time to process passengers at the airports while adhering to the screening requirements as per the Department of Health regulations.

"The SACAA has also reviewed its earlier decision of 'no catering' on board an aircraft by permitting airlines to provide pre-packed meals that must be placed in front of the seat for each passenger before the passenger boards the aircraft. This will allow for minimised movement during flight."