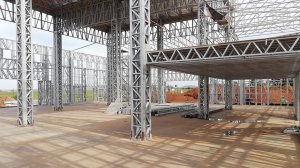 The current SANS 517 for light-steel-frame building (LSFB), which is still in development, focuses only on the application of the C-channel profile, but consulting engineering firm ES Consulting Engineers and Associates structural, fire and energy consulting engineer Wessel Esterhuizen believes that it would be beneficial to include additional profiles.

“It would be more effective if structural engineers had more profiles to choose from, especially on larger projects, where wind loads and other dynamic forces dictate the design requirements.”

He adds that the New Zealand light-steel-frame market is testing Z-profiles for use in warehousing projects.

The SANS 517 – in which only Section 5 provides guidance on the structural engineering aspect of light-steel-frame systems – covers moderate design criteria, which includes dynamic wind loading, as well as using design methods

for serviceability response limits. The rest of the code focuses more on installation procedures, providing guidance to specialist installers.

Esterhuizen suggests that the structural engineering section of the code could be enhanced and provide more options, consequently broadening the scope of LSFB designs for a greater variety of engineering applications.

LSFB systems form part of modular building techniques. The LSFB method was introduced in South Africa in 2007, even though it had been widely used for decades in Australia, the US and the UK in the industrial, commercial and residential sectors.

Esterhuizen notes that some of the benefits of the light-steel-frame system is that it is a dry system – which means it does not rely on traditional “wet” brick and mortar building methods – and its being modular allows for it to be well engineered prior to fabrication.

“For example, it is useful for vertical extensions in the residential market. “It can limit wet damage during the construction process while limiting the load on foundations,” he explains.

The system can also be manually handled in most applications, consequently allowing for more efficient construction.

“However, the system has more engineering challenges than meets the eye, especially when larger, more complicated projects are considered,” Esterhuizen warns, adding that LSFB technology should be regarded as an alternative method of construction, where all constraints of the project are known.

“With current technology, it is necessary for hot-rolled 350W grade steel section insertions to be introduced into the structural analysis design to stabilise the dynamic forces to which LSFB are subjected.”

modelling – should be used by an experienced structural engineer to model the structure so that deflections, reactions, bending moments and shear forces can be calculated.

“The client must consult the structural engineer with as much information as possible before the manufacturing of the steel frame components for the engineer to give input before costing,” Esterhuizen advises.

When designing for buildings of more than three levels, he notes that LSFB systems become very unstable during a seismic analysis, as warping can occur under seismic conditions. Therefore, it can become expensive to strengthen the light-steel-frame material through the adding of hot rolled sections.

Further, the limitations of different profiles are a major concern for structural engineers. Esterhuizen notes that only a few light-steel-frame profiles are available in South Africa, while attempts have been made by some manufacturers to create thicker profiles of up to 1.8 mm.

However, the industry standard in South Africa remains the 0.8-mm-thick C-channel profile, which has a 550 MPa grading, which is a higher tensile-strength than that of normal hot rolled steel.

“One of the major structural-design engineering concerns is crushing and curling at connections at the foundation fixing level, where concentrated loads and stresses can lead to deformation,” he explains.

Esterhuizen recommends that the structural engineer should consider this in the design phase of the project to prevent deformation.

Generally, LSFB’s dry-walling systems are more effective in terms of fire prevention because of the effective insulation properties and non-flammable materials used inside the wall. This improved insulation also provides environmental benefits.

“For structural engineers and architects, much focus is placed on green building projects. LSFB systems are great for designing energy efficient homes,” Esterhuizen explains, noting that this is one of the system’s major selling points.

However, he says not all projects can be built using such systems. Using LSFB is only possible once the client has consulted with a registered structural engineer prior to accepting advice from installers and manufacturers.

“The system has segmented uses in the construction market, where fabricators and installers must have a record of successful LSFB projects,” he says, adding that, if used correctly in the right applications, building projects have been known to have been successfully engineered and erected under notable cost and time constraints.