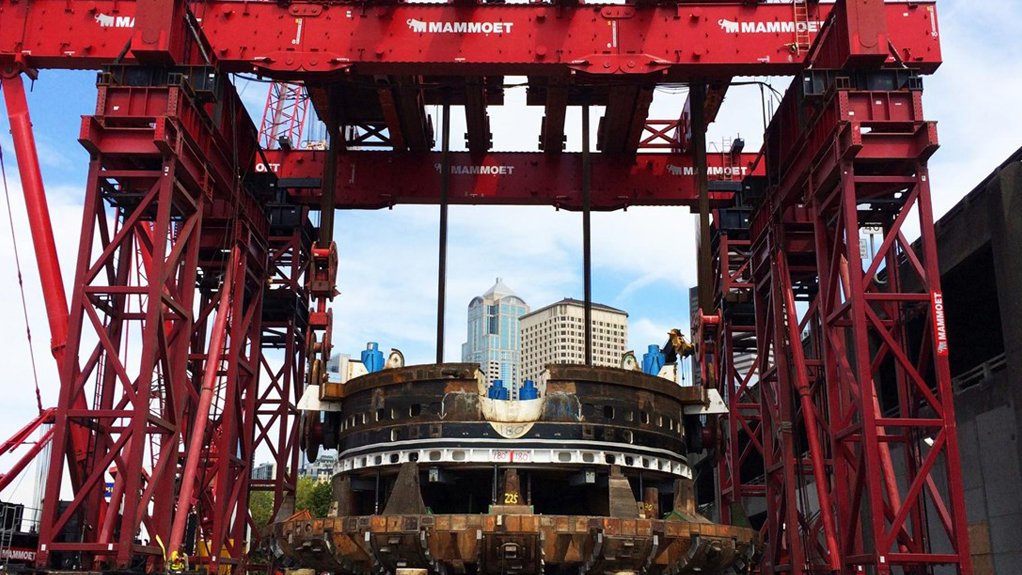 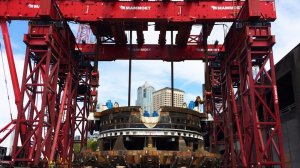 Bertha had stopped operating at 320 m into the underground operation after damage to the seals located at the front of the machine was discovered.

The project entailed the construction of a 3.2 km road tunnel in Seattle, that would carry State Route 99 under downtown Seattle from the SoDo neighbourhood to South Lake Union, in the north.


To get the front section of the machine to the surface for repairs, a recovery shaft, 37 m-deep and 27 m-wide had to be constructed.

Therefore, Mammoet’s lifting tower, was custom-built specifically for this project to fit the limited space next to the Alaskan Way Viaduct. The lift tower could also slide over the shaft and steer its payload within millimetres of a target.

Owing to the softness of the soil in which Bertha was situated, the lifting tower was constructed on two concrete foundation beams, which were installed on top of the existing concrete piles.

The seals and main bearings were then removed and replaced before the front end was reinstalled and placed back into the shaft using a reverse single hoist.

Mammoet completed the lift of Big Bertha’s cutter head in the second quarter of last year, with Bertha having resumed tunnel boring in December. The Washington State Department of Transportation expects the entire project to be completed in early 2018.

Breaking Records
In a previous specialised heavy lift project, the LR13000 which the company claims is the world’s largest crawler crane, was used to install four platform legs on a wind turbine installation vessel called the Aeolus. It is owned by Netherlands-based contracting company Van Oord.

The crane was assembled in 12 days at Lloyd Werft in Bremerhaven, Germany. Mammoet also designed, fabricated and delivered tailor-made top lifting tools and a tailing frame to ensure that the platform legs which have no lifting points could be lifted securely.

The company also installed four spudcans – the inverted cones mounted at the base of the jack-up, which provide stability for lateral forces on the jack-up rig – using a specially engineered method. This entailed placing the partly rigged spudcans on the seabed and moving the Aeolus over it.

The spudcans were connected to the platform legs using cranes and sea divers. “We completed the project very professionally, safely and on time” he notes.