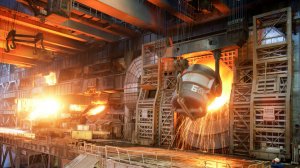 He says that many steel processing plants in South Africa are making use of outdated technology, which compromises their operating efficiency and increases their operating and maintenance costs. He explains that this makes it very difficult for local steel suppliers to compete on a cost-effective basis with plants in other countries that are far more advanced.

“Cost cutting is not the answer, cost-efficiency has to be based on very strong maintenance practices and a degree of modernisation,” Bezuidenhout says.

He notes that integrated steel and mining company ArcelorMittal South Africa (AMSA) announced at the 2016 Southern African Metals and Engineering Indaba, which was held in Sandton from May 26 to 27, that it has committed to investing R4.6-billion in capital programmes for the next five years, which Bezuidenhout says “will go a long way to helping South African steel producers modernise their plants and become more cost-effective”.

A key area of focus in upgrading steel plants is managing the reliability and cost of energy supply, with SMS group senior processing engineer Peter Sanders explaining that the steel industry is electricity-intensive and many of its processes are designed to run continuously, with interruptions in energy supply creating additional costs.

“The sharp increases in electricity tariffs have been crippling for some steel producers, which are constantly trying to push their operating costs down as far as possible in order to meet the market prices, which are also forced down by low-cost Chinese imports. Electricity costs, thus, put a lot of strain on their ability to refresh their capital equipment, which has a detrimental effect on their operations in the long term,” adds Bezuidenhout.

Developing Solutions With these challenges in mind, SMS group has been working closely with its clients to develop a number of solutions with cost efficiency as a primary objective.

SMS Concast Modulated Wave Stirring technology enables SMS group to modulate the stirring of the electromagnetic stirrers in a continuous caster according to the specific type of material being cast, thus regulating the amount of electricity being used.

The company’s Conguage product allows for the measurement of both the level of material in the concast mould and the thickness of the lubrication between the mould and the molten material, thereby ensuring that there is a consistency of lubrication and subsequently a high-quality end product. Gounden highlights that this is the first product on the market capable of measuring this lubrication layer.

The Conyard product further allows SMS group to track materials from the casting plant to the dispatch yard using laser technology, enabling material to be located at any given moment and assisting with on-time delivery.

SMS group’s HybrEx press was moreover introduced this year, which Gounden explains facilitates the use of hydraulic energy solely for the extrusion process of material in an extrusion press, while auxiliary movements are managed by dynamic electric servo drives. These drives have the ability to operate at twice the speed of conventional drives in current presses, which increases productivity, he notes. The HybrEx can reduce electric consumption by at least 50% and increase productivity by 20%.

Sanders further describe SMS group’s development of an oxygen injection system that enables chemical energy to be used instead of electrical energy when scrap steel is melted down in an electric arc furnace (EAF). The company has further developed energy logistics systems that enable energy use in a plant to be monitored and optimised, and energy recovery systems, where gas produced by the furnaces is cached, converted into steam and used for generating electrical energy.

Sanders also mentions that the company’s Conarc system, comprised of a melting system with two EAF shafts, significantly reduces energy consumption and is highly flexible in terms of input material. In addition, he notes that SMS group has developed a shaft EAF (sharc), which runs at a much lower energy consumption than other furnaces.

“We also have a client who is interested in outsourcing the entire energy management of its plant to us, and we are investigating this opportunity,” adds Sanders.

“These micro mills are well suited to serve local markets, especially in Africa where infrastructure is a problem in many areas, as scrap steel can be processed directly in the area where it is required, for example, for construction, at a relatively low cost,” he says.

Bezuidenhout adds that SMS group has grown its footprint in Africa, focusing on the Southern African Development Community as well as Kenya, and highlights that a key objective of the company is to ensure its presence in the African market. “This is crucial as you have to have a quick response time if you want to become a technology partner to your clients, which is certainly our philosophy,” he says.

Bezuidenhout further points out that the modernisation of steel plants will enable them to meet increasingly stringent environmental regulations and avoid the additional cost of carbon tax, which is expected to be implemented in South Africa on January 1, next year.

Sanders explains that steel processing is carbon intensive, owing to its reliance on energy produced by coal, and notes that carbon tax is thus a major concern for the steel industry. He highlights that SMS group’s plants are built with the highest level of environmental compliance at the fore in order to help companies manage this.

Despite the many challenges facing the sector, Bezuidenhout remains optimistic about the local steel industry’s prospects: “I think the Department of Trade and Industry (DTI) certainly appreciates the gravity of the current steel situation in South Africa, and they are doing a lot to address it, such as through import tariff protection. It also definitely seems that our steel clients’ production volumes are increasing – not to build stock, but to meet increasing orders – and that’s a healthy situation,” he points out.

Last month, Engineering News reported that DTI deputy director-general Garth Strachan had indicated that government was close to agreement with AMSA on a ‘fair-pricing’ methodology, adding that its implementation would be monitored by a ‘steel committee’, comprising government officials and steel experts.

South African steel consumers are, however, raising concerns about the composition of the steel-price basket – based on selling prices in a range of countries – being proposed by AMSA as a mechanism for regulating flat-steel prices. They argue that the exclusion of low-priced jurisdictions from the basket will ensure that domestic prices remain high, and this will have a detrimental effect on downstream activities and compromise the competitive position of local fabricators.