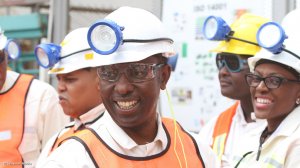 Mineral Resources Minister Mosebenzi Zwane discusses the rising number of fatalities at mines in South Africa, raising concerns that this year’s reports could surpass that of the 77 mineworkers' deaths recorded in 2015. Date recorded: 03/06/2016. Camerawork and videoediting: Nicholas Boyd.

JOHANNESBURG (miningweekly.com) – The number of fatalities at mines in South Africa is at risk of surpassing that of the 77 mineworkers' deaths recorded in 2015, Mineral Resources Minister Mosebenzi Zwane said on Friday.

Addressing delegates at the National Union of Mineworkers' (NUM’s) 2016 Central Committee meeting, held in Irene, he said that, with 33 fatalities already reported up until May this year, mine safety was a significant red flag for the Department of Mineral Resources (DMR).

"We are deeply concerned that there are still fatalities in the mining sector," he said.

Urgent attention was required to reverse the trend of increasing fatalities, he said, citing recent incidents at Impala Platinum’s Shaft 14 and Rustenburg 1 shaft and at Vantage Gold Fields’ Lily mine, in Barberton, that had claimed several lives in the first half of the year.

Lily mine had yet to recover the three workers trapped underground when a surface container was enveloped in a sinkhole on February 5.

To date, funding and safety concerns had hampered efforts to retrieve the container.

The DMR vowed to withhold the mine’s right to resume operations until the workers were recovered and until the department was assured of workers’ safety.

"The mine will remain closed until we, as a department, are satisfied that all requirements [ensuring worker safety] are met," he asserted.

However, Zwane noted that funding had been secured to retrieve the workers, with the DMR set to continue monitoring the safety of the tasked recovery team.

Health and safety and the much coveted "zero harm" were the collective responsibility of workers, companies, unions and government.

The comments emerged as Zwane, who assumed the Ministerial role in September last year, reiterated the DMR's commitment to health and safety at mines in South Africa, meaningful transformation and enhancing regulatory and policy frameworks.

He further assured delegates that he would continue engaging stakeholders as the country faced mounting economic pressures, praising the NUM's important role in "the battle" between capital and labour.

However, he conceded it was an uphill battle to eradicate the triple challenges of poverty, inequality and unemployment as companies fought to stay afloat in a tough operating environment.

While some ground had been gained in the implementation of the stakeholder declaration signed last year to minimise retrenchments, workers bore the brunt of cost-cutting initiatives and the introduction of technology and mechanisation.

There was a need to ensure workers were upskilled and well positioned to take advantage of the opportunities presented by the increase in the implementation of technology.