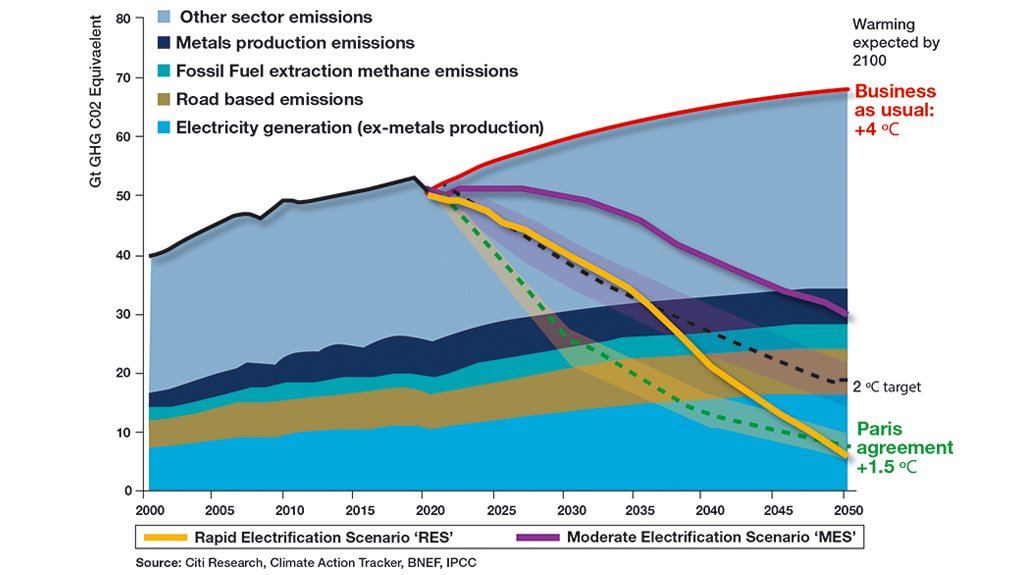 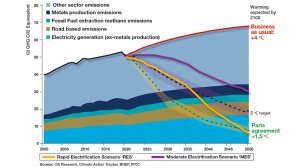 Complying with the Paris agreement on climate change mitigation.

JOHANNESBURG (miningweekly.com) – In a rapid electrification scenario, metals have the ability to bring about the reduction of close to 1 000 gigatonnes (Gt) of global greenhouse gas (GHG) emissions by 2050, Citi Research states in a note that examines the metals industry’s potential contribution to climate change mitigation over the next 30 years.

This is the first of a Citi series aimed at evaluating the metals industry as well as individual metals in the context of the Sustainable Development Goals (SDGs) of the United Nations (UN), beginning with UN SDG 13 on climate change, since it is widely thought to be one of the most important challenges for humanity.

Citi’s finding is that the metals industry is critical to facilitating the bulk of the decarbonisation that the Paris Agreement requires by 2050.

The metals industry is able to do this by enabling the shift to:

Cumulative global GHG emissions in Citi’s rapid electrification scenario are well above the carbon budgets of 420 Gt to 580 Gt for the 1.5o Intergovernmental Panel on Climate Change scenario.

In order to meet the Paris agreement:

The note, compiled by eight analysts, states that all emissions directly and indirectly related to the metals industry, including the 16-plus metals markets, could well be deeply emissions negative over the vast bulk of the period through 2050, in both their moderate and rapid electrification scenarios.

Most notably green hydrogen in steelmaking has the potential, the note states, to reduce scope 1, 2 and 3 emissions from the metals sectors even further than the analysts’ rapid electrification scenario calculates. The recycling of metals, and in particular battery metals, is cited as a further means by which the carbon intensity of metals production can be lowered.

Moreover, the ‘second life’ of certain products, such as the repurposing of electric vehicles into energy storage, adds another perspective by which metals' ‘net’ emissions reduction can be calculated to be higher through their lifecycle.

Because steel volumes account for the vast bulk of metals production growth in both the moderate and rapid electrification scenarios, steel's value weight is the highest by some distance, despite its lower value per tonne compared to many other metals. This leaves steel the biggest contributor to the net reduction in emissions. Critically, all metals in the rapid electrification scenario are substantial net contributors to climate change mitigation over the period, with copper second and aluminium third to steel.

Substantial investment and contributions to decarbonisation are required across all emitting sectors. At present, electricity generation accounts for about 13 Gt of global GHG emissions, or 25% of total, though it is 11 Gt or 21% of total, excluding the metals sector.

To decarbonise the world, the note states that a portfolio of mitigation needs to be developed and implemented across the highest carbon-emitting sectors. It is calculated that although the pace of innovation has accelerated and investment has increased, the investment gap between what is being spent and what needs to be spent is a high $3-trillion a year to more than $5-trillion a year.