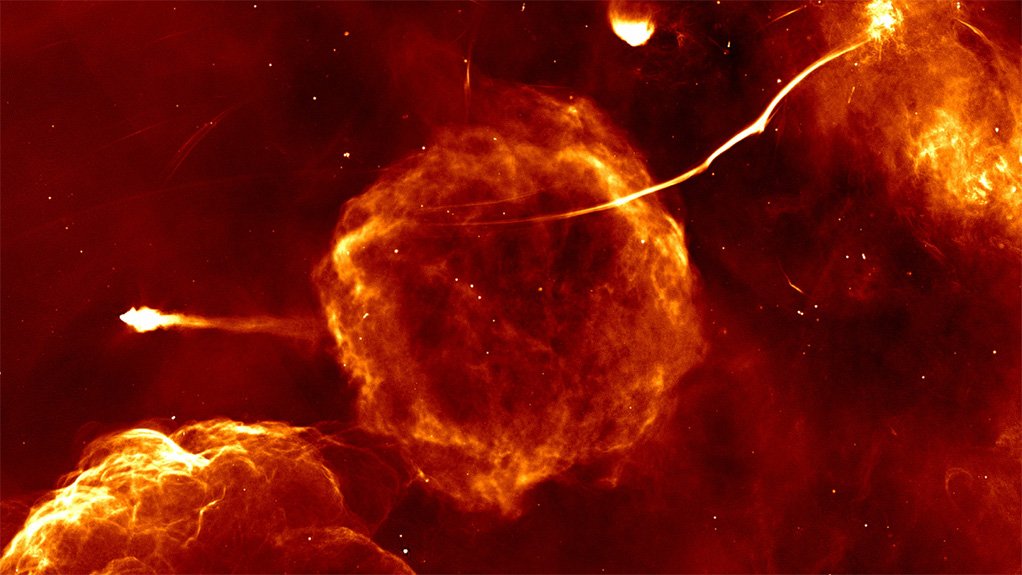 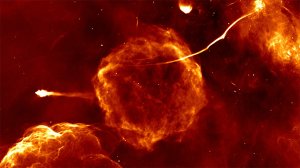 South Africa’s already world-renowned MeerKAT radio telescope array, located in the Karoo region of the Northern Cape province, has again ‘delivered the goods’. An international team has released an unprecedentedly clear and detailed radio wavelength image of the centre of our galaxy, the Milky Way, the South African Radio Astronomy Observatory (SARAO) has reported.

The creation of this new image of our Galactic core was made possible by MeerKAT’s cutting-edge design and great sensitivity. The array is composed of 64 dish antennas, spread across an area with a diameter of 8 km. The instrument’s geographical location – in the southern hemisphere – was also a major advantage.

The image is a mosaic constructed from 20 distinct observations totalling 200 hours of telescope time. These covered an area of the sky amounting to six square degrees (equivalent to 30 times the apparent size of a full Moon). The resulting data was all processed to achieve an angular resolution of four seconds of arc – equivalent, SARAO explained, to the width of a human hair held at arm’s length. The data was processed locally by the Inter-university Institute for Data Intensive Astronomy’s ilifu and the Centre for High Performance Computing’s Lengau supercomputers. The final image totals 100 megapixels. The analysis of all the data took three years.

“The image captures radio emissions from numerous phenomena, including outbursting stars, stellar nurseries, and the chaotic region around the four million solar mass supermassive black hole that lurks in the centre of our Galaxy, 25 000 light years from Earth,” highlighted SARAO. “Radio waves penetrate the intervening dust that obscures the view of this region at other wavelengths.”

Among other things, the image shows previously unknown supernova remnants (the expanding spheres of material created when massive stars explode), including one that is an almost perfect sphere – such perfection is rare. The image is also giving scientists their best insight so far into mysterious structures found in the centre of the galaxy and nowhere else: radio filaments. These are very long (they can extend for up to 100 light years) and very thin structures that emit radio waves, which are still far from being satisfactorily explained.

“I’ve spent a lot of time looking at this image in the process of working on it, and I never get tired of it,” said Oxford University, Rhodes University and SARAO study lead author Dr Ian Heywood. “When I show this image to people who might be new to radio astronomy, or otherwise unfamiliar with it, I always try to emphasise that radio imaging hasn’t always been this way, and what a leap forward MeerKAT really is in terms of its capabilities. It’s been a true privilege to work with colleagues from SARAO who built this fantastic telescope.”