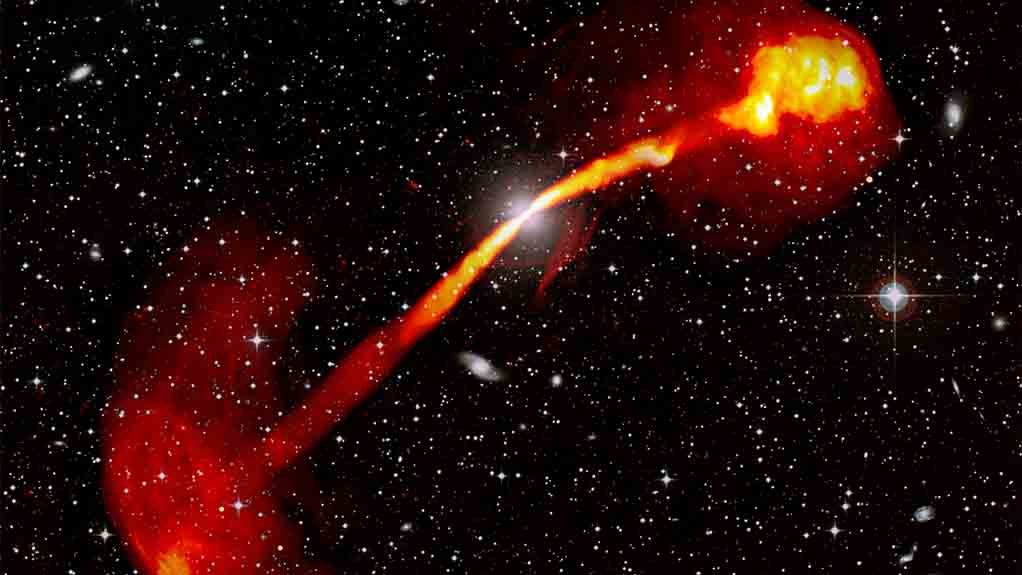 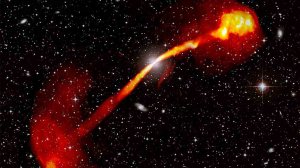 At the centre of the giant elliptical galaxy IC 4296 is a rotating black hole with a mass of a billion suns.

Energy released by matter falling onto the black hole generates two opposing radio jets containing magnetic fields and relativistic electrons. After travelling through intergalactic space at the speed of light for 160-million years, these radio waves were recently detected by the South African Radio Astronomy Observatory’s MeerKAT telescope, in the Karoo.

In a statement on June 17, it is explained that the bright spines of the initially straight jets become unstable just outside the galaxy, where some of the electrons escape to create several faint radio “threads” below IC 4296.

Between the bright jets and the outer lobes are smooth “ribbons” filling channels excavated from the surrounding gas by defunct jets from an earlier period of activity. The ribbons are eventually stopped by intergalactic gas, nearly a million light-years from the central galaxy (a distance equal to ten times the diameter of the Milky Way galaxy) and form the “smoke rings” visible in the left radio lobe.

US National Radio Astronomy Observatory’s Jim Condon says “only MeerKAT’s unique combination of sensitivity, angular resolution and dynamic range allowed the discovery of these threads, ribbons, and rings” in this previously well-studied galaxy.

Condon is the lead author of a study just accepted for publication in The Astrophysical Journal that summarises the research done by a US-South African team.

An anonymous reviewer of the manuscript who submitted it for publication, says “it is clear that new results like this from MeerKAT and other Square Kilometre Array (SKA) pathfinders are set to overhaul our understanding of extragalactic radio sources”.