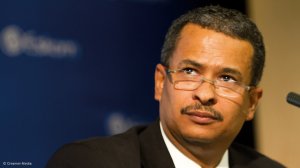 State-owned power utility Eskom confirmed on Monday that it would not be in a position to meet the end of year deadline for the flow of first power from the Medupi power station, which is being built in the Limpopo province.

CEO Brian Dames reported that, following an independent assessment and fresh delays to the control and instrumentation (C&I) contract, the second half of 2014 had now been set as the new, "realistic" deadline for synchronising Medupi's first unit, Unit 6, to the grid.

The power station was meant to supply first power to the grid by December 2013, a deadline reaffirmed as non-negotiable earlier this year by Public Enterprises Minister Malusi Gigaba.

Dames also confirmed that the cost of the project had increased from R91.2-billion to R105-billion, excluding interest during construction (IDC). But IDC was not expected to deviate materially from the R30-billion estimated previously, despite the cost increase and the project delay.

A large portion of the cost increase related to owner’s development costs, which had risen from R6-billion to R11-billion, as Eskom allocated additional urgent resources in a bid to deal with delays on the strike-prone site.

However, coal-handling costs would also rise, as it had been decided that a new stockpile should be developed to enable Eskom to continue to receive coal from Exxaro’s Grootegeluk mine despite the delay.

Dames indicated that a commercial strategy would be put in place in an effort to recover the additional costs from those contractors that failed to deliver. However, he warned that such a recovery process would take time to conclude.

After the main boiler, turbine and civil contracts had been placed by late 2008, Medupi’s cost was initially estimated at R87-billion, a figure that was revised to R91.2-billion in June 2012. At that time, the schedule for planned grid synchronisation was also revised from 2011 to the end of 2013.

Department of Public Enterprises spokesperson Mayihlome Tshwete described the new delay as “unfortunate”, but stressed that Eskom had kept Gigaba and the department appraised of the risks to the schedule throughout.

Gigaba would continue to place pressure on both Eskom and its contractors to mimimise future delays and provide electricity certainty for the country. He would also support Eskom in its efforts to recoup the additional costs in line with the contractual remedies available to it.

Gigaba would not seek to fire any official for the “sake of theatrics”, but Tshwete told Engineering News Online that the Minister would use the leverage available to him to insist on greater levels accountability, particularly in instances where underperformance by individuals or companies could be proven.

Gigaba had also tasked Eskom to provide him with mitigation strategies to ensure uninterruptable electricity notwithstanding the delay. He had also received concurrence from the Eskom board to split the role of the CFO, who has been overseeing the build programme, and create a new position of executive for group capital to improve performance.

Dames revealed that the latest delay could result in a potential supply/demand gap of around 700 MW in the first half of 2014, which the utility hoped to close through a range of demand- and supply-side initiatives. No details were disclosed, however.

The 4 764 MW coal-fired project had been afflicted by serious labour unrest, as well as boiler-weld problems and the failure of factory tests for the C&I software, which is being supplied by Alstom.

Following the well-publicised December 24, 2012, factory-acceptance test failure on the software system, problems also arose during further tests in late June and early July on components of the system. Tests on the balance-of-plant component reportedly failed in June, while concerns had been raised in early July about the boiler protection system.

CFO Paul O’Flaherty said Medupi “still does not have an operational C&I system”, while Dames reported that Eskom is exploring “alternative supplier arrangements” as part of a risk-mitigation plan.

“First prize is for the current contractor to deliver,” Dames said. But he added that Eskom would be engaging with other partners, particularly those that had supplied C&I solutions for other power stations within the utility’s fleet.

O’Flaherty said critical issues relating to the Weld Procedure Qualification Record and the post-welded heat treatment on the first two Medupi units were being addressed by Hitachi, the main boiler contractor. Affected welds were being cut, re-welded and retested, which was resulting in site-access challenges for other contractors and subcontractors.

Progress had also been made in dealing with labour unrest on the site – a problem that had resulted in as many as eight months of stoppages since the start of the project in 2009. Unrest peaked between January and April this year when the site had to be closed for ten weeks and was only reopened after Gigaba intervened personally.

Dames said that the utility now expected to add 3 800 MW of new capacity from Medupi, Kusile, Ingula and Sere by 2015, adding that the full 11 126 MW from the four projects should be introduced during the 2018/19 financial year.

It would also not be seeking to reopen the tariff determination issued by the National Energy Regulator of South Africa in February, with Dames indicating that it would work within the 8%-a-year envelope approved for the five-year period from April 1, 2013, to March 31, 2018.