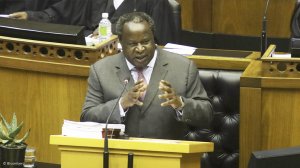 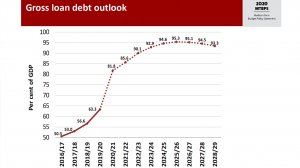 Finance Minister Tito Mboweni unveiled a significantly looser fiscal consolidation roadmap in the Medium-Term Budget Policy Statement (MTBPS) he presented to lawmakers on Wednesday when compared with the framework provided in his June Supplementary Budget.

Nevertheless, he reiterated his message that “deep and wide” expenditure cuts were still required if the country was to avoid a debt crisis.

Although the National Treasury typically provides a three-year framework in the MTBPS, Mboweni used the occasion to outline a five-year fiscal consolidation horizon, which indicated that the government’s debt-to-gross domestic product (GDP) ratio was likely to peak at 95.3% and only in the 2025/26 fiscal year.

The figure represented a material shift from the June statement, in which a commitment was made to stabilise debt at 87.4% of GDP in the 2023/24 fiscal year. Prior to the onset of the Covid-19 pandemic, the National Treasury had forecast that government’s gross debt would peak at 65.6%.

Under the revised outlook, the debt-to-GDP ratio is expected to surge to 81.8% during the current fiscal year – a year in which the economy is now expected to contract by 7.8%, rather than the 7.2% fall forecast in June.

This slump in growth is expected to result in revenues falling R312-billion short, at R1.27-trillion, of the projections provided in February, while the borrowing requirement will rise by R342-billion to R774.7-billion.

This less steep consolidation pathway follows a briefing note produced by the Presidential Economic Advisory Council earlier in October, which stated that it was “patently not possible to stabilise the debt over the medium term” and that longer than three years was required in light of the economic fallout associated with the pandemic.

“Even if it were possible, it may not be desirable to force a drastic contraction of spending while the economy is already being battered by the Covid-19 lockdown,” the briefing note read.

Likewise, University of the Witwatersrand’s Professor Michael Sachs argued in a recent paper that the country’s fiscal crisis could not be resolved solely by fiscal consolidation, describing the path to consolidation proposed by government in the June Supplementary Budget as “so extreme that it is neither possible nor desirable”.

“The attempt at large fiscal adjustment would impose unsustainable social pressures and choke off the recovery, imposing a second blow to livelihoods on top of the Covid-19 catastrophe,” Sachs, who worked as a senior official at the National Treasury for many years, wrote in the paper published by the Southern Centre for Inequality Studies.

Mboweni said the fiscal consolidation framework outlined in the MTBPS was designed to be growth‐supporting, especially in the context of the Economic Reconstruction and Recovery Plan released by President Cyril Ramaphosa on October 15.

To support the economic recovery, however, he argued that it was critical to ensure that the fiscal imbalances did not act as a drag on growth or continue to widen.

“With mounting debt and interest payments that now consume 21 cents of every rand of main Budget revenue, the public finances face the risk of a debt spiral. Stabilising debt to avoid such a crisis will involve significant expenditure reductions across government.”

Mboweni told lawmakers that the prevailing fiscal position was one of the central impediments to economic growth, and that a failure to reverse present trends would inevitably lead to a debt crisis.

He argued that government spending remained too high for the tax base and bemoaned the fact that expenditure was skewed towards compensation, rather than investment.

“Fiscal consolidation means taking difficult decisions today that will affect all parts of society in the interests of building a prosperous future,” he said, reporting that the MTBPS framework was premised on achieving a main budget primary surplus by 2025/26.

"Some might ask: can we not just spend our way out of the present crisis? Certainly in 2009, when we had debt of 31.5% of GDP and the real yield on government debt was about 3%, every rand of government spending got us R1.60 in GDP. Now, however, at such elevated real interest rates, every additional rand gets us less than a rand of GDP. It may even subtract GDP, leaving us poorer and more indebted than before," Mboweni averred.

WAGE BILL IN FOCUS
Achieving the proposed surplus would require large reductions in noninterest spending over the coming three years, amounting to R300-billion relative to projections set out in the 2020 Budget Review.

“The measures proposed in the MTBPS mark an important shift. While expenditure reductions will be wide and deep, the bulk of the adjustment will be absorbed in compensation costs, while capital investment will increase in some categories,” Mboweni said.

Government is proposing growth in the public-service wage bill of 1.8% in the current year and average yearly growth of 0.8% for the coming three years. To achieve the target, government had, controversially, not implemented the third year of the 2018 wage agreement and was proposing a wage freeze for the next three years.

The Congress of South African Trade Unions (Cosatu), which remains in a political alliance with the governing African National Congress, has objected to what it describes as an “austerity strategy” that is narrowly and almost exclusively focussed on the wage bill.

“This is problematic and ideologically driven. The MTBPS needs to deal with the messy pay and benefits structures within the vast plethora of agencies and public entities that contribute to the current size of the consolidated government spending on remuneration,” Cosatu said in a statement.

In his speech, Mboweni said government could not expect the civil service to carry the burden of nation building alone and that consideration should be given to "across-the-board" pay reductions for management in national, provincial and municipal governments, as well as State-owned entities and all other senior public representatives.

As part of adjustments made to the 2020/21 Budget, R36.5-billion was reduced from compensation of employees, arising mainly from a freeze on salary increases.

The National Treasury also confirmed that R10.5-billion had been allocated to South African Airways to implement its business rescue plan.