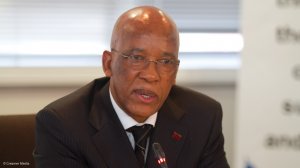 Energy Minister Dikobe Ben Martins confirmed on Monday that the long awaited cogeneration and coal independent power producer (IPP) procurement programmes would be initiated in April and May respectively.

In addition, in something of a surprise move, the Minister announced that further renewable-energy projects would be added to the list of 17 preferred projects selected in November, following the third bid window under the Renewable Energy Independent Power Producer Procurement Programme (REIPPPP).

Martins said in a statement that the procurement programme for 800 MW of cogeneration capacity would be initiated in April, while bidding documents would be released in May for 2 500 MW of coal generation.

The procurement programmes were in line with Ministerial determinations published in 2012, which indicated that the additional IPP generation capacity would be procured to help meet South Africa’s electricity needs.

The determinations also indicated that 2 652 MW of baseload or mid-merit natural gas capacity would be procured. But bidding processes would only be initiated once the Gas Utilisation Master Plan had been completed. Martins said the document would become available in May for public consultation.

The inclusion of additional projects under bid-window three of the REIPPPP, meanwhile, would “follow due procurement process” and contribute towards the Department of Energy’s (DoE’s) effort to raise the contribution of renewables in the country’s electricity mix.

The size of the additional allocation was not immediately disclosed, but the DoE confirmed that the allocation of additional megawatts took account of the fact “that the prices offered by the bidders are competitive, and reflect a downward trend compared to the prices in windows one and two”.

Martins added that the August 18, 2014, submission deadline for bid-window four remained intact and that the DoE intended buying an additional 1 000 MW of renewables capacity during that round.

Prior to the enlargement of bid-window three, the DoE had selected a total of 64 renewables projects following three bidding rounds. These projects, 17 of which still had to reach financial close, collectively represented a combined foreign and domestic investment value of more than R100-billion and a combined capacity of 3 933 MW.

In addition, the submission date for a concentrated solar power-only bidding round closed on March 31, 2014, with three bids having been received for an allocation of 200 MW.

The South African Bureau of Standards was finalising a due diligence and independent manufacturer verification process and a list of compliant suppliers should be released this month. The DoE, Eskom and municipalities would then move to implement a revised contracting model, the roll out of which was still scheduled to begin in 2014/15.

“A stakeholder engagement process will be embarked upon to further elaborate on the revised contracting model for SWH.”

Martins also announced that the final biofuels blending position paper would be published in May, while the effective date for mandatory blending remained October 2015.