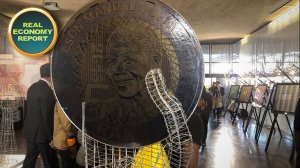 Marleny Arnoldi: The notes and coin commemorate what would have been Mandela’s 100th birthday. The notes and coin will be circulated for about three months, with more than 400-million notes printed, to the value of R140-billion. Finance Minister Nhlanhla Nene discusses the symbolism of the notes.

Marleny Arnoldi: The events captured on the notes helped to shape South Africa’s democracy and are valuable to remember to this day. SARB governor Lesetja Kganyago tells us more about the note features.