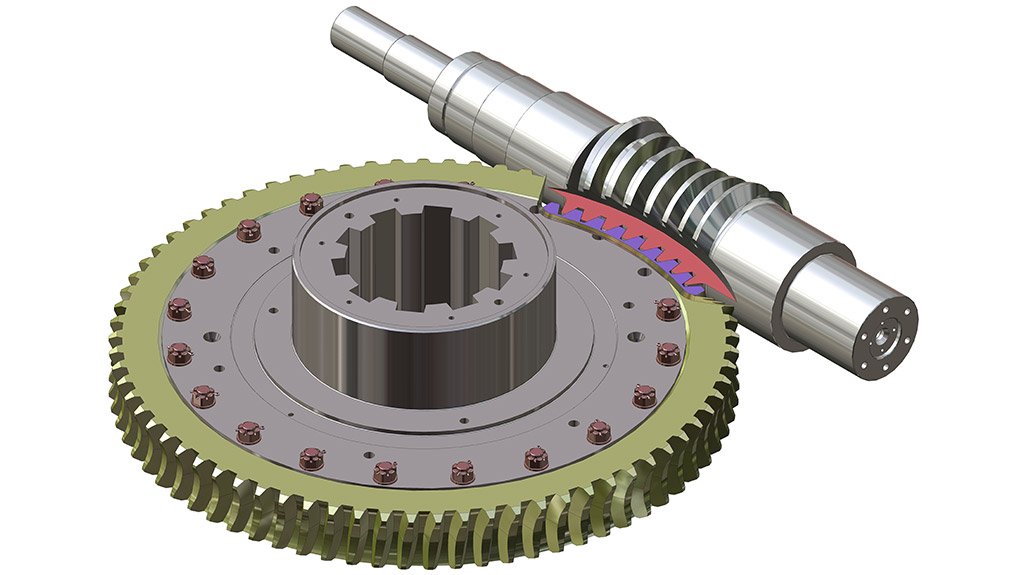 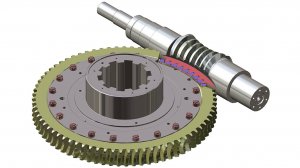 GLOBOID GEAR SET A virtual image of the gear geometry

The highly technical project entailed the manufacture of two 1.7-m-diameter, 4.7 t gear sets that control 1-m-diameter hot-steel rollers in a steel plant. The project mainly centred on the design geometry of the axis-cyclic-symmetric, hourglass-shaped worm gear of the drive pinion and of the globoid gear.

The system also had to be robust enough to withstand three to four times the normal operational stresses, known as shock loads.

The hourglass shape of the worm increases the number of teeth simultaneously in mesh and improves the conditions of force transmission, which, in turn, increases driving efficiency and loading capacity by 3.5 times, compared with traditional single-enveloping cylindrical worm gears, he explains.

A subsequent challenge was to accurately manufacture the double-envelope-gear rotating component.

The profiled contact surface of the globoid gear, made of ultra-high-strength aluminium bronze with a steel hub, is driven by the 1.1 t worm pinion, made of quenched and tempered wear-resistant steel, which turns the globoid gear in a ratio of 73:2 in either direction.

The large globoid gears are used in tandem to control the elevation of the hot-steel rollers along a production line and, hence, also control the precision of this process. While there is more than one roller on the line, part of the project was to validate that the complex geometry works.

Venter Consulting Engineers hosted Danieli experts who inspected and appraised the performance of the parts before they were shipped to Europe.

“Our niche is to design and produce small-batch, high-precision gears, parts and components for local and international clients. We created our own software suite to evaluate every facet of the geometry and to design the manufacturing process,” Venter explains.

He highlights, however, that manufacturing the gears required specialised materials, metals and techniques to meet the micrometre-scale tolerances required.

“The concave, axis-cyclic-symmetric 1 t aluminium-bronze outer casting of the globoid gear, which fits into the worm gear, had to be cast in a rotating mould, which increased the gravity in the liquid metal by 50 times through centrifugal forces. This technique leads to the impurities gathering on the centre of the cast part, which we then machined out, leaving a uniform, high-quality contact surface.”

The bronze casting acts as a sacrificial component, thereby protecting the mating worm gear from premature wear. However, control over the elevation of the steel rollers cannot be sacrificed and, hence, the casting’s specialist materials and method of manufacture, explains Venter.

Venter Consulting Engineers has several industrial, steel and mining clients in South Africa, but the company is one of only a handful of engineering firms internationally that produce globoid gears and assemblies.