Latest product range for carrying cables to be showcased

Latest product range for carrying cables to be showcased 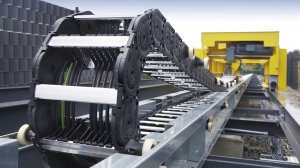 The system’s rollers are mounted on ball bearings at the side of the carrier, allowing for very long travel lengths and requiring substantially less driving power than the conventional gliding systems.

“The RSC system’s upper run does not come into contact with the lower run and has 90% less force, compared with that of a conventional gliding system,” says BMG power transmission product manager Renier Slabbert.

This self-aligning system ensures quiet operation, low vibration, high travel speeds and acceleration, as well as minimum stress on the cable carrier and cables. Other benefits include easy installation and low maintenance.

Slabbert points out that Tsubaki has mastered an unusual challenge using this RSC system on an offshore crane ship, on which a steel-cable carrier was used to rotate the crane, with the entire crane system weighing 14 t.

He highlights that a BMG product specialist recently attended a training session at the Kabelschlepp factory, in Germany, presented by long travel-chain specialist Peter Sebastian Pütz – who will also visit BMG later this year to train staff on the system’s use on port, long travel length and crane applications.

Training on these systems is necessary, as they are becoming increasingly popular for cable carriers in large crane systems.

“In modern crane systems for the industry or seaport container cranes, the principle of rolling instead of gliding has become established in mobile automation for applications with long travel lengths or high levels of friction.”

For applications such as large cranes, where gliding systems reach their technical limits, the RSC system has proved to be the ideal solution because crane systems require faster cycles and higher travel speeds of cables.

At ports and steelworks, crane systems have to provide unlimited availability, even with maximum load, as unexpected downtimes become costly. A cable carrier that meets these increasing requirements is an important prerequisite for safe, smooth operation of the crane, says Slabbert.

“Conventional solutions were not always [adequate] for these areas of application, since the applications require system components that are as resilient as the overall system,” he explains.

Further, the system is fully equipped with rollers that require less drive power for travel lengths longer than 50 m.

In terms of maintenance, all components of the RSC system are easily accessible. Recesses in the channel make it easy to reach the rollers and the modular side parts.

“This allows for inspection of the rollers without lifting the cable carrier. Worn rollers can be replaced individually during maintenance,” Slabbert avers.

He emphasises that customers benefit from the cost savings on the low wear of the rolling system and the design which facilitates maintenance and repairs.

The expo will also celebrate the official opening of BMG’s new world-class distribution centre – a R400-million investment of more than 50 000 m2 of warehousing space – stocking more than three-million products.

Slabbert says this opening is a special event for BMG to mark its progression, because the operation has expanded from being a bearings company in 1974 to becoming a leading supplier of engineer- ing consumables in Africa.